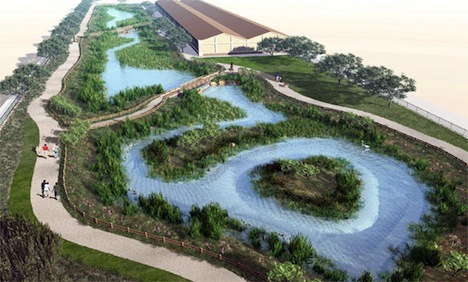 Before it was slathered in concrete, South Los Angeles was densely forested with oak trees interrupted only by a series of streams that fed the Los Angeles River. Now the industrial neighborhood is responsible for unchecked polluted storm water and a host of other environmental concerns. That's why turning a former MTA bus parking lot into a nine acre wetland that efficiently processes storm water runoff is such a major turn of events. It took $26 million and nearly three years, but the city now has a way to deal with water pollution and residents have a dedicated, city-funded green space. Paths and boardwalks welcome neighbors to peruse the grounds, read about wetlands and engage in the education center and museum planned for construction.

The numbers are pretty impressive, too. At full capacity the South Los Angeles Wetland Park can process up to 680,000 gallons of stormwater per day. It works like this:

"Storm water arriving by a pipe drain under San Pedro is detoured into a small treatment facility that filters away trash and chemicals, such as oil from city streets. The water then takes a circular trip in an underground pipe around the park before being delivered into the pools, where bacteria naturally cleans up the remaining pollutants. The cleaner water is sent on its way to the Los Angeles River where it makes its way to the ocean." 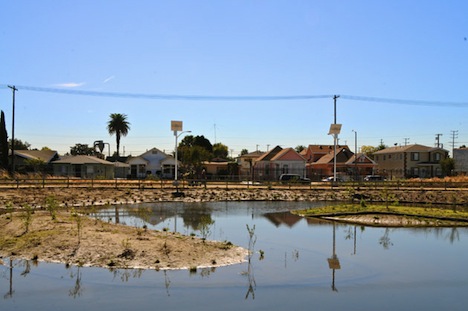 Yes, it's an artificial wetland and it'll never be as good as mother nature herself, but after bulldozing former wetlands and filling them in with concrete, this is the next best alternative. The pictures of the site as it stands today aren't quite as impressive as the 3D renderings, but after a few years the wetland should be in full bloom.