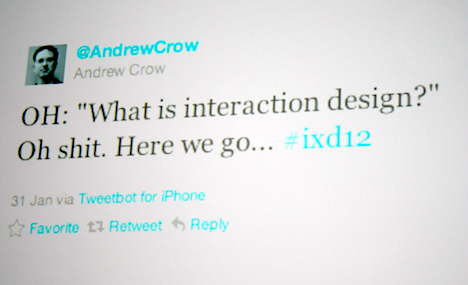 It's been two weeks since the Interaction12 conference in Dublin, Ireland. IxDA Dublin Redux events have already been organized and are occurring globally. Attendees continue to tweet and share the abundance of information they absorbed over the course of the four-day conference. Interaction12 consisted of 15 workshops, 6 keynotes, 80 speakers, and several planned activities around Dublin, Ireland. IxDA organizers put together a diverse group of lectures and events throughout the conference for attendees to experience.

To give you an idea of the amount of diversity, talks were categorized into subheadings such as behavior, theory, ecosystems, process, aesthetics, strategy, dialogue and gamification. Most talks were 45 minutes and on the final two days there were 10-minute talks breaking up the larger sessions. The keynote speakers began and ended each day, usually sharing a big picture idea that complimented the other talks programmed throughout that day. 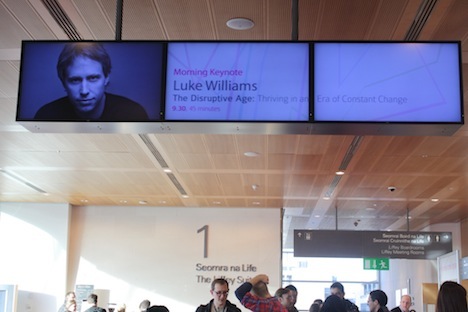 Luke Williams kicked off Day 2, with his eye-opening and inspiring keynote on disruptive thinking, titled "The Disruptive Age: Thriving in an Era of Constant Change". He gave a similar talk at the Design Research conference at IIT, but at Interaction12 he challenged attendees to consider how to disrupt the cliches of interaction design. This was the kind of energy that was contagious throughout the four days of the conference. Not only did Williams inspire and challenge the crowd, but the first slide of his presentation was a common theme for the rest of the conference. He shared a slide of a tweet that he came across the night before his talk that said, "What is interaction design? Oh shit. Here we go..."

This was a common question and discussion throughout Interaction12. It was as if Interaction Design was having an identity crisis. It was an exploratory process where everyone was working together to challenge and discover the capabilities of the discipline. Some attendees even created a humorous video during the conference, "Shit Interaction Designers Say," styled after the "Shit Girls Say" YouTube meme.

Methodology, process and software were some of the concepts up for discussion. Some talks that highlighted these were "Cultural Design" presented by Erik Dahl, raising the discussion about designing from a place of culture instead of simply considering the users emotions, goals and needs. "I Hate Process. I Love Process: Why designers are divided about process and what to do about it" presented by Christina Persson and Joan Vermette was another example which questioned process in design and the unbalanced nature between thinking, drawing and making. "Concept to Code: Code literacy in UX" presented by Ryan Betts raised discussion around the importance of understanding and being knowledgeable about coding in UX practices.

An abundance of interesting and useful information was covered throughout the conference. Fortunately there were 30-minute breaks throughout each day, which gave people the opportunity to discuss and share the content from the talks they attended. This was great, especially if you teamed up with a few people to attend different talks, so that the content from each talk could be discussed in your party, during the breaks. Lunch was provided each day and one of the days IxDA organizers scheduled a happy hour so we could discuss in true Dublin style. These were all great opportunities for networking and discussion. 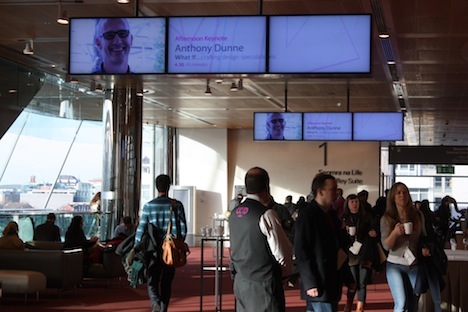 Microsoft provided a movie screening of Amplified during one of the lunch breaks, which if you were lucky enough to be in Chicago last week, made its way into the Dublin Redux event. In addition, each day after the conference there were activities to choose from as well. On the second day, attendees could go to the Great IxDA Debate hosted at the Church Cafe or the Coroflot Connects networking reception hosted at the Westin Dublin Hotel. After, attendees could join a Dublin Journeys pub-crawl in which conference attendees were given a map of participating pubs to grab a drink with other people from the conference. There were other post conference festivities throughout the four days such as the Interaction Design Awards and the closing party, which was hosted by Microsoft and held at Guinness Storehouse. 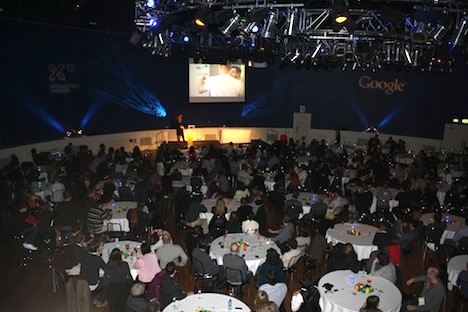 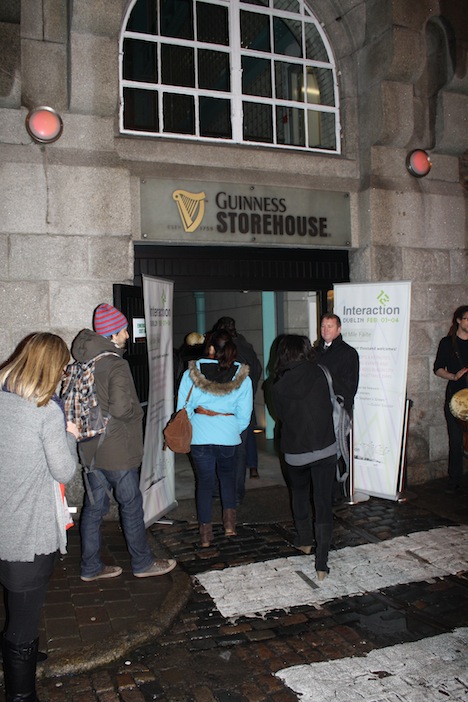 Closing party at the Guinness Storehouse

Interaction12 was well planned out for attendees to be able to soak up information on interaction design as well as enjoy the wonderful city of Dublin. The connections, memories and discussions continue to live on after Interaction12. If you didn't have the opportunity to attend the conference, try and go to your local IxDA Dublin Redux. You can also use the #ixd12 hashtag on twitter to join the discussion. I hope to see you next year at #ixd13 in Toronto!