The Design of Basketball, Part 1: The Role of New England Snow and Poor Equipment Design 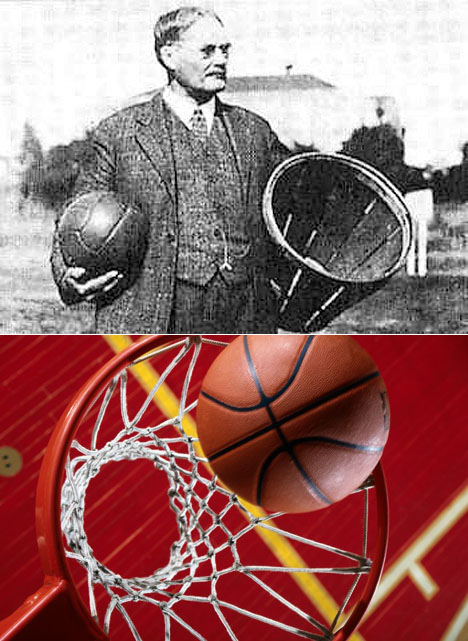 Statistics say few of you share my full-blown Linsanity, and our non-U.S. readers aren't interested in the NBA. But I thought I'd share some aspects of the invention and evolution of basketball that all designers can relate to. In broad strokes, the story of the sport involves 1) Needing to solve a problem with limited resources and within limited confines, 2) Gradually improving equipment through better manufacturing technology and ingenuity, and 3) Modifying the original idea's design when unforeseeable human behavior—hacks, basically—kicked in.

Basketball was invented because of crappy weather. In 1891 a guy named James Naismith (pictured above) was working for the Phys Ed department at a YMCA in Springfield, Massachusetts. He needed to keep his students exercising. But it was December in New England, where freezing rain and snow make outdoor sports impractical. The following is from Naismith's own resume:

To create an indoor game that would provide an "athletic distraction" for a rowdy class through the brutal New England winter. Under orders from Dr. Luther Gulick, head of physical education at the School for Christian Workers (now Springfield College), Naismith had 14 days to create a game for a group of 18 students who were training to become executive secretaries.

While Naismith couldn't control the weather, he did have access to an indoor gymnasium. It wasn't the right shape or size for baseball, nor was an indoor hockey rink a possibility. He didn't want the physical contact and potential injuries of football or rugby, nor the guarded goals of lacrosse or soccer and the contact those could engender.

His solution was to invent a sport where players could only advance the ball by throwing or slapping it to each other; running with the ball, kicking it or wrestling it out of someone's hands was forbidden. And there would be no goaltender; instead the "goals" would be placed high up over the players' heads to preclude contact and provide the scoring challenge. 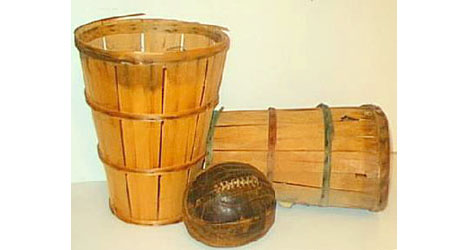 The school janitor was reportedly tasked with finding two boxes to use as goals. The story goes that he came back with two peach baskets, and affixed them to the bottoms of the galleries on either side of the gymnasium, about ten feet off of the ground. 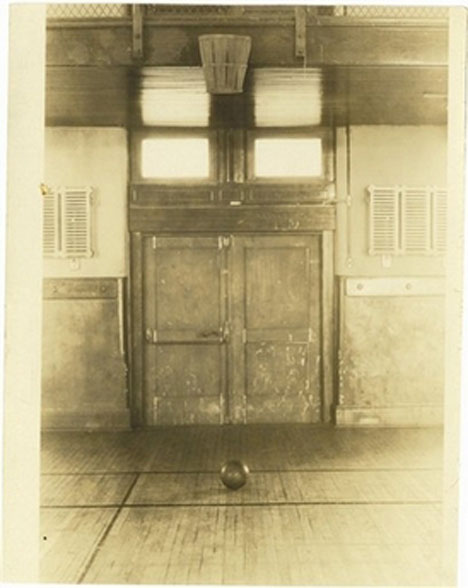 There was no hole in the bottom of the peach baskets, requiring someone get on a ladder to retrieve the ball every time a point was scored. In later years, as the sport flourished, a metal rim with a closed net hanging from it was used. You might wonder why they added the net, rather than sticking with just a bare metal rim that would allow the ball to fall through; there's no documented reason, but my guess is the net was used to trap the ball so you could visually confirm a goal had been scored. 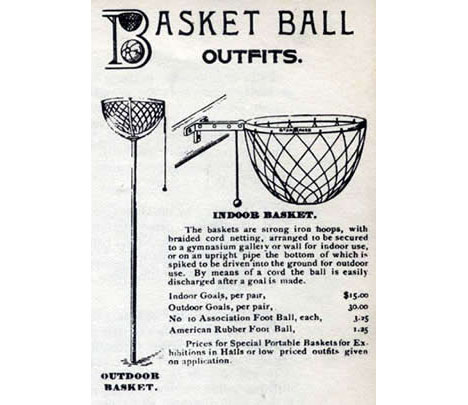 This was still inconvenient. While not as cumbersome as having to break out a ladder, someone had to poke the ball out of the basket with a stick after each scored point. There were some alternative designs, like the one shown above, where an attached cord could be pulled to draw the net upwards and force the ball out. But eventually, an anonymous someone had the clever idea of cutting the net at the bottom so the ball could fall through. The net's movement would still be enough to confirm if a point had been scored, particularly when combined with the visual contrast provided by the white net against the dark-colored ball. 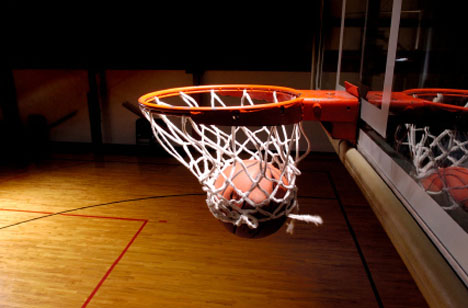 That dark-colored ball, by the way, was initially a leather soccer ball that Naismith scrounged up. But just three years after the sport's invention, it became popular enough that Spalding manufactured a purpose-built basketball that remained in production through the first half of the 20th Century.

Made from a rubber bladder enclosed in a series of stitched leather panels, there were exposed stitches at the point of closure, as on early American footballs. 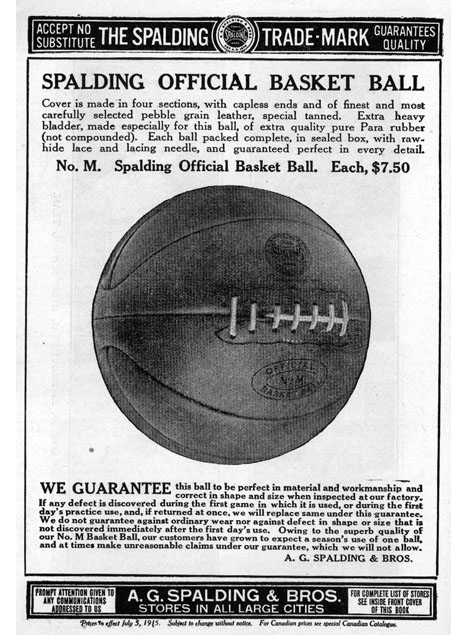 These manufacturing limitations had a direct influence on the sport, as we'll see in Part 2.

The Design of Basketball, Part 1: The Role of New England Snow and Poor Equipment Design