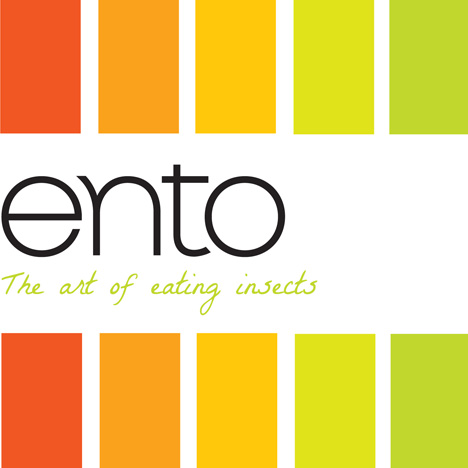 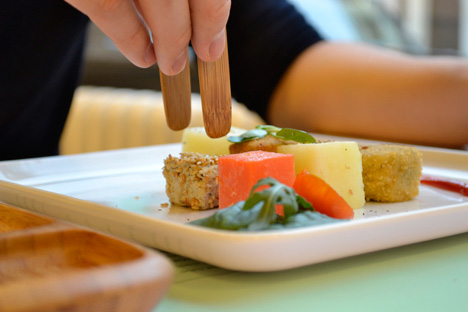 Ento is a roadmap for introducing edible insects to the Western diet. It is the outcome of a project undertaken by a team of four postgraduate students from the Royal College of Art and Imperial College London who wanted to tackle the growing issue of food supply in an increasingly hungry world. Motivated by the failings of the livestock industry, as well as the environmental and nutritional benefits of insects, the team wanted to see how this provocative new food source could be introduced to Western diets. The project is about driving cultural change through understanding human perceptions, using strategic design thinking, as well as through creating innovative and compelling experiences.

Why eat insects? As postgraduate design students, our team wanted to tackle the issue of sustainability with an innovative design-driven approach. We first came across the idea of eating insects when researching solutions to global food security. Food demand is accelerating, and agricultural productivity cannot keep up. By 2050 global demand is set to double to 40 giga-calories per day, and much of this increase will be due to demand for meat.

The livestock industry is notoriously resource-hungry, consuming a third of all crops and requiring 70% of agricultural land. It also accounts for 20% of greenhouse gas emissions, through production, transport and animal digestive gas.

It is against this backdrop that edible insects offer an exciting alternative. They are extremely efficient at turning feed into meat and can be farmed at a very high density. This means that their embodied energy is low—a tenth of that of beef cattle—and that at high volumes they are very cost efficient. Taking their nutritional benefits into consideration as well, it is easy to understand why the UN, the EU, and the Dutch government are some of the major players investigating the potential of edible insects. 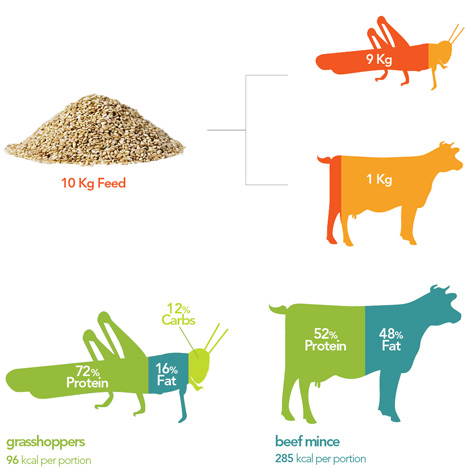 But despite the fact that a lot of people taking this idea very seriously, most of the research to date has focused on the supply side. We realized that there was an opportunity to address one of biggest obstacles on the demand side: acceptance.

Currently there is a major cultural taboo against eating insects. The idea of eating insects is generally imagined to be dirty, gooey and unsafe. None of these preconceptions are true, but it doesn't change the fact that edible insects are certainly not seen as an exciting future food! We realized that changing these beliefs would be a major challenge.Perception Experiments Our first experience of edible insects—pan-fried locust served at a London restaurant—gave us confidence that edible insects could be accepted by Western cultures. Despite some initial hesitancy, all four us took the first leap and were impressed by the taste and texture. Edible insects tend to have subtle, savory flavors and, when fried, the texture is crunchy with a satisfying meatiness. 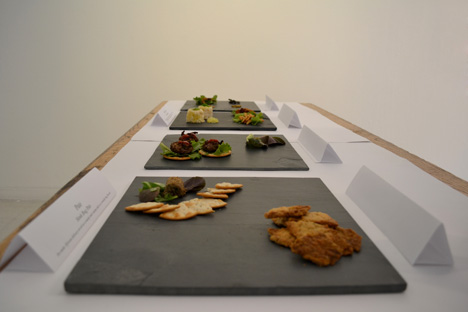 After experimenting on ourselves, the next step was start experimenting with other people. We designed an experiment to try to understand people's perceptions about insect eating. We cooked up a spread of mocked-up (though the subjects didn't know this!) insect dishes that varied from very abstract to very apparent. We asked people what they would try and what they wouldn't.

Most people were, unsurprisingly, more accepting of abstract dishes like the bug flour biscuit. Interestingly though, this abstraction effect was far more powerful than we expected; it only dropped off when the insect parts were very apparent. Even a minimal barrier layer of breadcrumbs was enough for many people to find the food appetizing. 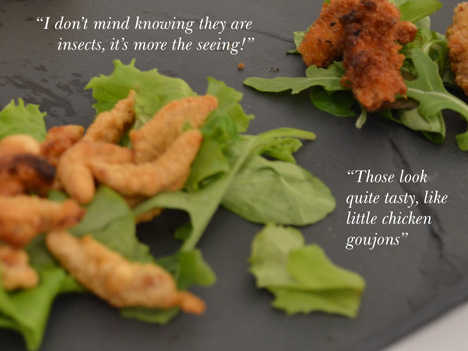 The power of abstraction was a critical insight for our later food design. However, the experiment also identified a whole host of negative perceptions that we would need to address if people were to accept edible insects. A new food culture would be required.

Culture and Strategy In order for people to truly accept something new, it has to be embedded in a context that they can access. This meant that we had to generate a culture surrounding insects as food, which could be used to ease their introduction to society. To identify the elements of food culture, we set out to find what turns a series of ingredients into a food we recognize; for example, what differentiates our perception of a sandwich from two slices of bread with filling?

We organized our findings into different parameters: personas (who); scenarios (when and where); food format, ingredients, tools, and experience (how and what); and drivers and motivations (why). These parameters would evolve and adapt over time.

While studying food introductions in the UK, we found a very valuable example in sushi. 30 years ago, tourist guides warned British tourists about the strange and off-putting Japanese habit of eating raw fish; now you can buy it at Boots and Marks & Spencers, two quintessential British retailers. Our research also highlighted the role of the Yo!Sushi chain restaurant.

We studied the strategies we found in other food introductions and developed a "wheel of insect food culture," in which each concentric ring represents the evolution of the culture in time. The conclusions from this exercise informed our strategy for targeting consumers.

In our roadmap we have paired a potential consumer's motivations with the natural growth of a new food business. We start by focusing on the adventurous user, where the main motivation is something new for the sake of it, the crazier the better. These customers could be targeted at festivals and markets, i.e. situations where many people are already primed for a surprising food experience.

This would build up enough hype and resources to open a restaurant, where we would really focus on the experience itself: taste, aesthetic, service, etc. Here, we would have a controlled environment where we could introduce our new food as well as the associations that we would like to go with it.

The restaurant would bridge the gap as the novelty hype decreases, allowing us to focus on the sustainable, ethical and nutritional value of edible insects. This would allow us to introduce a range of supermarket products, which would at first consist of ready-made meals, but would evolve over time to become normal, everyday ingredients.

Visual Language In order to counter negative perceptions towards eating insects, we needed to create a brand that delivered a positive message. We opted for a design language that was natural, playful and futuristic: natural to convey a sense of purity and transparency; playful to make insects more approachable; and futuristic to identify insects as a contemporary, forward-looking food. Using this language, we created our brand "Ento." Entomos (Greek for insect) is the root to the word entomophagy, which means "the practice of eating insects, esp. by people." 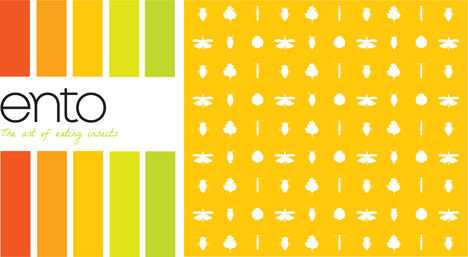 The similarity to the word bento (Japanese for lunchbox) gives the brand an Asian subtext. This reference highlights the relationship between insects and currently accepted foods and is appropriate as many Asian countries have an existing culture of eating insects. The color palette and signature patterns of our branding aim to highlight this association and reinforce the positive connotations of insects as clean, healthy and natural (imagine a grasshopper in your garden on a warm spring day).

Our early perception experiments identified that abstraction was required in order to gain acceptance. Coupled with our design language, the results of these experiments inspired our food design. After some experimentation we selected the cube as a shape to work with. It is not a shape that we usually associate with food, but in the case of edible insects as it creates a sense of human control and cleanliness. The geometric shape also recreates insects as a new food typology, which reinforces the idea of them as a future food. Fundamentally, the entocubes aim to redefine insects as a type of food, not as a type of animal. 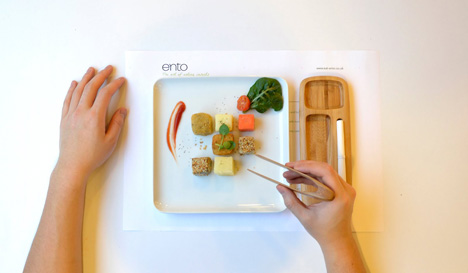 A new food To bring realism to our concept, we had to prove that we could make foods with a desirable taste, texture and appearance. We worked with waxworms, locusts and crickets: insects that are both tasty and easy to farm. We conducted numerous cooking experiments to explore how their textures and tastes behaved when prepared in different ways (e.g. boiling, frying, baking etc.). 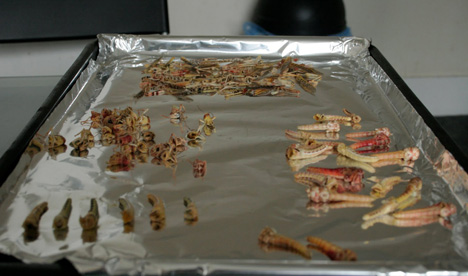 Initially we tried adding insects to existing recipes such as cricket falafel, or insect sushi, but the results were mixed at best. It was clear we needed to understand insects as an ingredient, so we turned to a technique called molecular food pairing. This is a mapping that pairs ingredients that should theoretically complement each other based on their major flavor components. The database we used (www.foodpairing.com) did not contain insects, but we substituted them for close flavor matches (e.g. baked waxworms taste a lot like roasted pistachio nuts). Using this method, we collected over 70 ingredients that could be combined with insects, and began tasting every combination one by one (it was a very long day of eating insects...). At the end of this experiment, we had created a database of ingredients that could potentially be used with the insects to create new recipes. 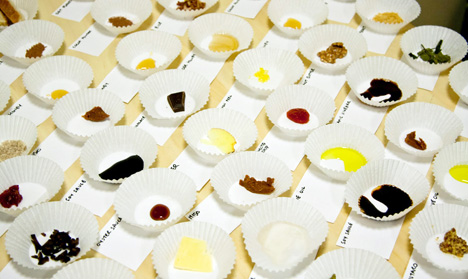 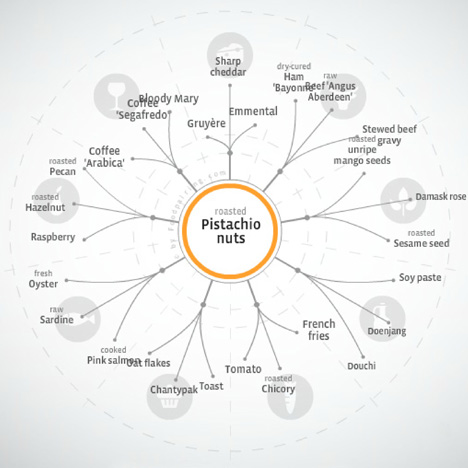 Since we are designers and not professional chefs, we collaborated with Kim Insu, a culinary student who is currently training at Le Cordon Bleu in London. Using our knowledge of insects as an ingredient combined with Kim's expert cooking skills, we were able to perfect new recipes that not only tasted great, but also redefined insects as a new type of food.

Meeting demand We weren't content to propose introducing our new foods without doing some calculations on the how we might supply them. When we did the math for the farming that would support the enterprise, some rather large numbers confronted us: a single restaurant would require a supply of one million insects per month (300kg)! And this number would grow quickly as our enterprise scaled up.

In order to ground the rest of our work in reality, we needed to make sure we would be able to design the farms capable of doing this. 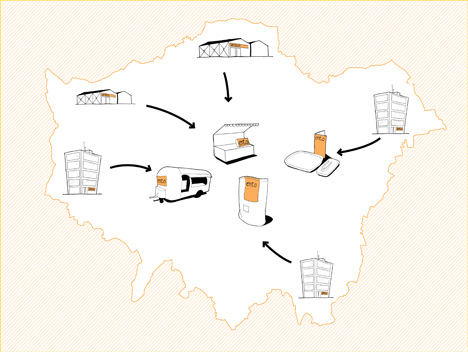 Our solution is a flexible network of urban farms, which reduce the food miles of our food and activate unused urban land. The proposed farming system is extremely scalable, in order to cope with the varying levels of demand in our roadmap. 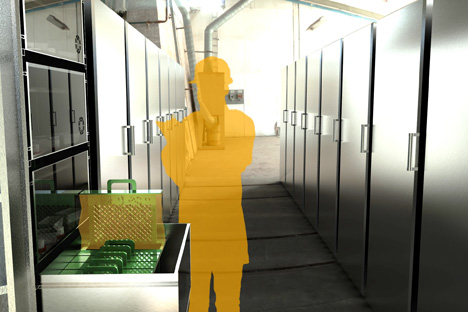 Inside these farms, we designed a series of modular cabinets. Each cabinet supports 32,000 insects: the top drawer houses the parents, the offspring of which populate and refresh the lower drawers. The insects instinctively perch on several vertical racks, which can be pulled out after 6 weeks of maturing. An integrated bag is then pulled down over this rack and the insects inside are now ready to be frozen and transferred straight to the kitchen.

With Ento we have taken into account economic, engineering and design considerations. This is a new way of addressing the very serious issues of food security and protein sustainability. Edible insects offer a tasty and healthy addition to people's diets that benefits the planet by dramatically reducing embodied energy and water use. We hope to take this project forward and make insects a regular sight in your local supermarket.

The Process
The Story