They're a staple in New York City, Portland and much of California, turning up in urban centers across North America by the day (at least come summer time): colorful, designer food trucks hawking delicious street food from around the world, from Korean tacos to crispy falafel. Multiple trucks park outside the Los Angeles County Museum of Art on Wilshire Boulevard, and near the startup hub of San Francisco's Mission Street.

Now, the designer food truck phenomenon has spread its wings to the busy streets of Manila, Philippines. Started by Michealle Lee and Natassha Chan, Guactruck opened business recently as the country's first designer food truck. It wasn't easy, they tell me. 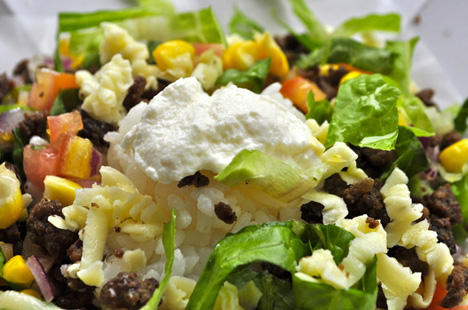 "In the first month, most of our customers were foreigners," said Ms. Lee, who hatched the idea after a stint living in Los Angeles to study business. "The Pinoys [Filipinos] were intimidated, even with free samples."

In the spirit of LA's many fusion restaurants, Guactruck provides Mexican-style Filipino dishes. Taking a page from Chipotle's playbook, they offer a build-your-meal plan along a buffet-style assembly line, with everything from soft tacos to burrito bowls stuffed with you choice of delicious Filipino dishes like pork adobo, chicken tocino and garlic rice. The tasty, unexpected blend partly reflects Guactruck's roots in Southern California, which has a rich Filipino and Mexican community.

"It's hard to find Mexican ingredients," Ms. Chan noted. "We made sure the food is more Filipino, prepared in a Mexican style."

This practical business decision—to use authentic, accessible ingredients—dovetails with their abiding interest in sustainability. All of the food is locally sourced, which drastically reduces their footprint in an island nation where much of the food is shipped in from overseas.

Beyond cuisine, Ms. Lee and Ms. Chan aim to innovate with sustainable business initiatives. The truck, a retrofitted Mitsubishi L300, is almost entirely self-contained and comes with LED and energy-saving lighting. They paid meticulous attention to the interior design to ensure all available space was maximized; only a generator sits outside to help power the truck during hours of operation. 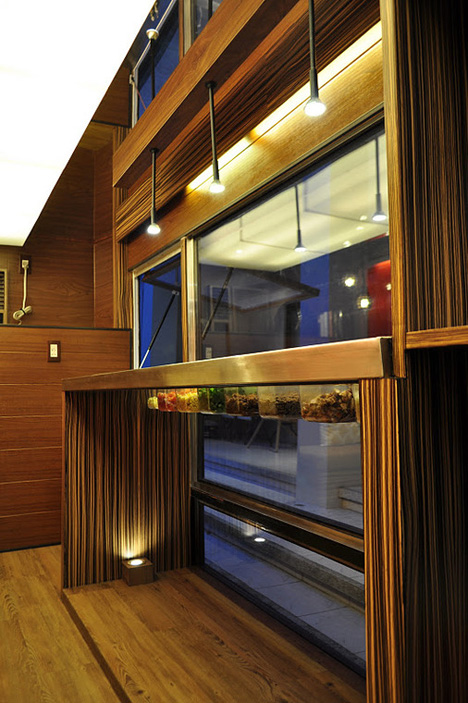 The interior is as thoughtfully-designed as the exterior

But my favorite part is the packaging, and not just because it contains their scrumptious tacos. The cutlery is biodegradable, and the lovely origami packaging is made from a single piece of cardboard, bypassing the need for glue or plastic. It contains positive messaging about Guactruck and recycling, as well as a secret message in Morse code for the more perceptive customers.

"We want to promote sustainability," said Ms. Chan, who noted that the sustainability movement is still finding its footing in Manila. She commented that a lot of people in Manila still throw trash on the streets, and in my own observations, recycling bins are few and far between. "We have to tell people about it. Everything generates awareness. Right now we need to educate them."

To push sustainability education, Ms. Lee found a way to encourage customers to return their packaging for recycling. Like a membership program, customers get a point every time they return a used package after their meal, and every tenth return earns them a free lunch or dinner. But unlike most membership programs, there are no wasteful cards; the Guactruck founders simply make a note of each customer's name, thereby building community with their customers.

"We want to instill a habit of conscientious consumerism," noted Ms. Lee, who was inspired to develop the sustainability angle after a summer studying business design at Parsons. "We focus on sustainability systems [in both business and environment]." On a regular basis, she and Ms. Chan bring the used packaging to a recycling center nearby and put the revenue back into Guactruck's operating expenses. 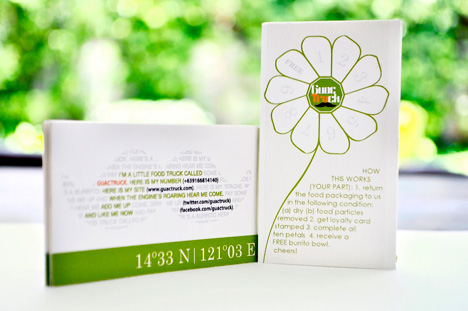 Simply starting a business is hard enough, but without a precedent in Manila, Ms. Lee and Ms. Chan struggled to even get the project off the ground. It took multiple attempted meetings with upper brass at Bonifacio Global City, a trendy business and shopping district in Manila, before they got permission to set up the truck. Permits are difficult to come by, especially as food trucks often carry the stigma of being "roach coaches."

Further, the intense humidity year-round keeps most potential customers inside during the day. To save energy, Guactruck takes a break during the hottest hours of the day, and they re-open for dinner during the cooler hours, when they get most of their customers.

After being "really persistent," they have transformed the truck into a city phenomenon, with local food writers and international design blogs picking it up. The group has refined their menu over time based on regular feedback surveys, and more and more locals have been patronizing the truck—and returning their packaging.

"We have a lot of loyal customers," they told me, noting that the combination of good food with the membership program encourages their customers to come back frequently. They've generated enough income in the few months since their launch to hire an extra staffer. They also now publish a map and calendar with their locations around Bonifacio Global City and use social media such as Tumblr to build a fun community amongst their regular patrons.

Despite their early struggles, Guactruck is off to a great start and could lead the way in Manila with the right recipe of sustainable business and fun, innovative design. Their attention to detail speaks to their passion not just for food but for societal change through simple design initiatives. 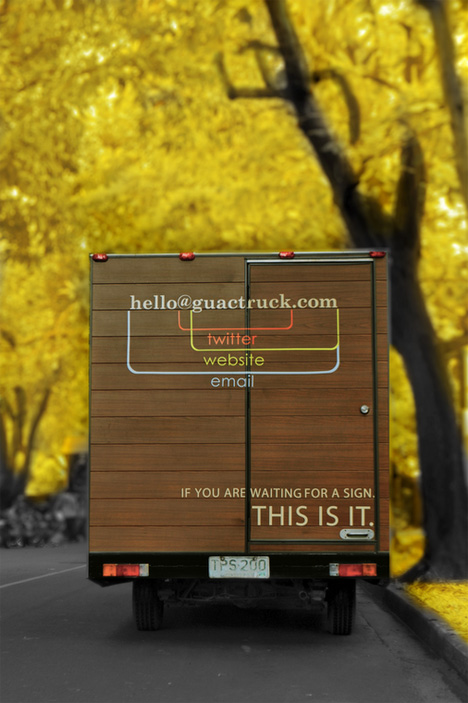 After I devoured my tacos, Ms. Lee brought me out to the back of the truck, which is emblazoned with a distinctive mustache man logo and the GPS coordinates of the truck's main locale. Bonifacio Global City features an outdoor mall with global brands dominating the skyline. By contrast, Guactruck's colorful logo combined with faux-hardwood exterior make the truck stand out from blocks away as a local and locally-sourced initiative.

"If we can create a good system, it will be profitable," Ms. Lee explained of the truck's business model. "But it has to be beneficial for everyone. If it directly relates to you, you will do something."