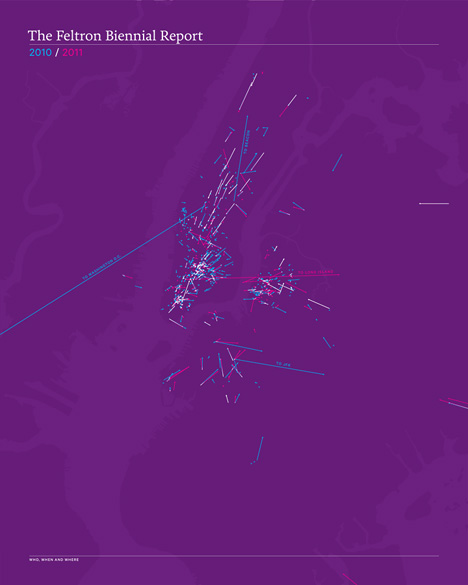 Information designer Nick Felton probably needs no introduction here: besides his current dayjob at Facebook, his perennial reports have offered a unique window into one particularly astute designer's life as a sort of digital-age diary par excellence.

While the latest edition of the Feltron Annual Report spans twice as long a time period as the reports from 2005 through 2009, it is perhaps less ambitious than last year's report, which was dedicated to his late father. (Willem Van Lancker and Robin Camille Davis provided a nice bit of commentary on the Felton's "struggle to define and reaffirm departed loved ones' existence in the 21st century.")

Yet insofar as the designer himself is the subject of his report, the document contains a mind-boggling amount of raw data on a full gamut of otherwise mundane activities. That it's beautiful goes without saying; in fact, the visual and typographic presentation is arguably more significant than the content itself, at least to the extent that Felton's day-to-day activity consists mostly of enjoying coffee, riding the subway, spending time with friends and family, etc. In other words, he's just a regular guy... who happens to rigorously record his daily activities and compile the data in a brilliant artifact. 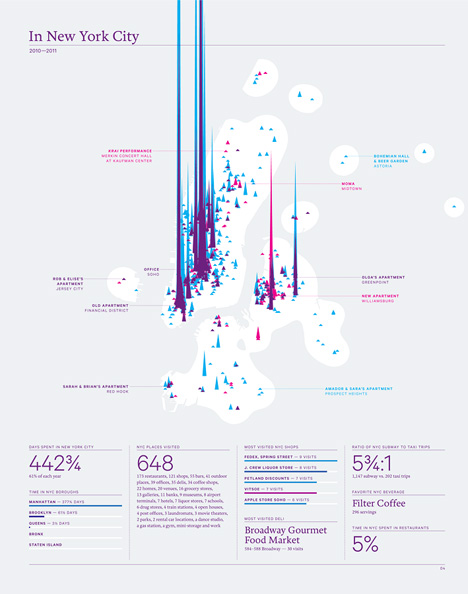 Which is to say that the Feltron Report is, as always, well worth closer examination (why summarize a summary?); the Dieter Rams shout-out—"Best Celebrity Encounter / at NYC Vitsoe Shop"—is just one of many hidden gems.