Johnny Selman designs all the news in a day in BBCX365 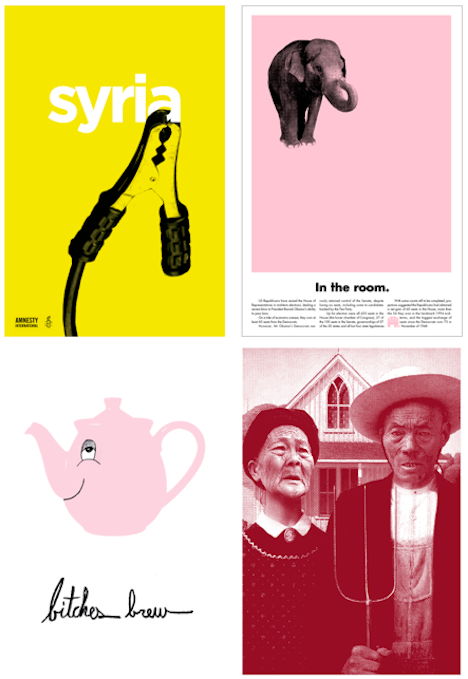 According to The Washington Post, "American citizens know little about current events in general and even less about overseas events." This isn't a recent phenomenon. Designer Johnny Selman points out that "even at the height of the Cold War, when international issues were front page news, the American public displayed only superficial awareness of overseas events and foreign policy." But instead of just feeling depressed and embarrassed about it, Selman decided to create a poster based on the news he heard that day and every day, for an entire year.

BBCX365 became his thesis project at Academy of Art San Francisco, where he was mentored by graphic designer/artist Paula Scher. Selman devised a minimalist mantra to guide him through the year. He set goals for himself like, "Reduce the story to its simplest visual form. Don't over think it. Don't over work it... Stay neutral. Be bold. Don't be afraid." To that Scher added these very wise words:

Be culturally literate, because if you don't have any understanding of the world you live in and the culture you live in, you're not going to express anything to anybody else.

Whereas most thesis projects barely see the light of day, Selman's project was honored with two AIGA SF cause/affect awards as well as a Judges Choice and First Place in the Student category at Academy of Art. See the rest of the posters and the stories behind them as well as more of Selman's very excellent work.

Johnny Selman designs all the news in a day in BBCX365