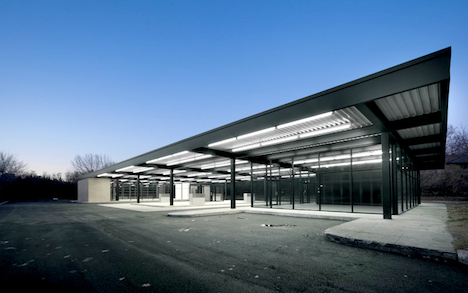 In 1969 Mies van der Rohe built his famous gas station on Nun's Island, Canada, a prototype designed as part of a four-unit development project that included a full service car destination, from sales to repairs. At the time, it was the island's only gas station, but it's stood vacant since 2009. Now, however, Canadian architecture firm FABG is redeveloping the site into a community center. Right from the start, principal Éric Gauthier disclosed that "the project is not about the faithful restoration of a monument. It is an interpretation trying to touch and communicate the essence of an artistic vision formulated by someone else in response to a world that is no longer the same."

Still, they seem to be going out of their way to honor van der Rohe's original structure. For example, they've retained the gas pumps but converted them into air in-take and out-take devices connected to the new HVAC system. They've also left the prominent, cantilevered roof intact, restoring and repainting the beams and the brickwork. The building's original transparency will also remain one of the new structure's chief focal points, with designated interior spaces marked by colored floors. For an "interpretation" it's awfully faithful, but we're talking about van der Rohe here—what's there to improve upon?