A Worthy Kickstarter Cause: Design Build Students Want to Save a Mies van der Rohe Masterpiece 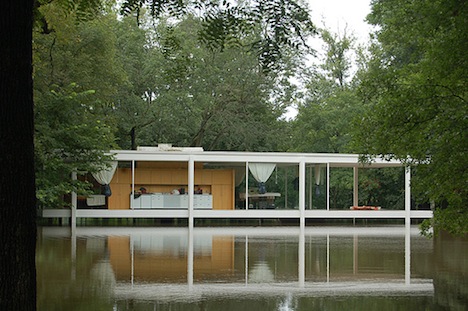 In 2009, a group of architecture students at Illinois Institute of Technology in Chicago designed the gorgeously minimal Field Chapel in Boedigheim, Germany, which won an AIA Honor Award in 2010. It was part of Design Build, a studio project that grants architecture students access to all aspects of the design process, from concept to construction—but only if they can get their project funded. Every previous Design Build studio has successfully funded and gone on to construct their project, and now this year's crop of students are reaching out with a Kickstarter campaign in order to raise money for The Barnsworth Exhibition Center, an exhibition space that will sit adjacent to Mies van der Rohe's famous target="_blank"Farnsworth House in Plano, IL.

When van der Rohe built the house in 1951, he clearly didn't anticipate the major flooding problems that have nearly ruined some of the spectacular furniture on display there, not to mention the extensive damage to the floors. The Barnsworth project would erect an additional exhibition space to safely house the furniture in case of another flood. To learn more about the project and to help fund Design Build, visit their Kickstarter page.

A Worthy Kickstarter Cause: Design Build Students Want to Save a Mies van der Rohe Masterpiece