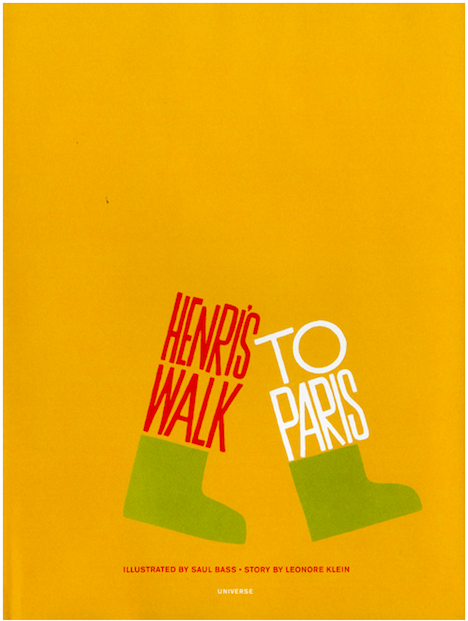 Saul Bass, the legendary graphic designer, has been getting a lot of play this month. First, his opening title sequence for Anatomy of a Murder has been masterfully restored for Criterion's new Blu Ray DVD, which also includes a behind the scenes look at his relationship with the film's director, Otto Preminger. And now Rizzoli/Universe Books is reprinting Bass' long forgotten children's book "Henri's Walk to Paris."

Written by Leonore Klein, who penned only a handful of children's books, the story is about a young boy who lives in a small French town and dreams of visiting Paris. If you can't guess what happens maybe the title will help you out. It may not be the most inventive narrative and these aren't even Bass' best illustrations, but even mediocre Bass is still really, really great.

Steven Heller commented that "virtually each tableau in this book of spreads could have been a Bass film poster," and "It looks as if he had taken the storyboard for a film title sequence and enlarged it to grand proportions." And no where is Bass' uncanny ability to convey mood and theme through image and typography clearer than on the cover. I love how the letters of the book's title becomes physical. Incidentally, these two "legs," if you can call them that, are all we ever see of little Henri—a singular touch from Bass, who never illustrated another children's book.