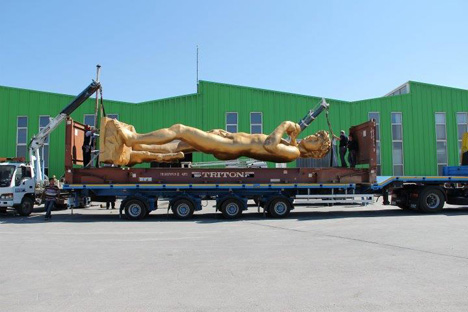 New York City's Storefront for Art and Architecture is pleased to present "DOUBLE [copies, fakes and replicas]," a Manifesto Series event on the occasion of the arrival and subsequent departure of Serkan Özkaya's David (inspired by Michelangelo) in downtown Manhattan. The Turkish conceptual artist's piece, a golden rendition of the iconic sculpture that is (as the title of event suggests) twice the size of Michelangelo's masterpiece, is based on Stanford University professor Marc Levoy's computer model. He has stated that, "I wanted to use the potential of the 3D model to recreate the most precious man-made object; one which I had never seen for myself."

The name of the event also alludes to the fact that the sculpture is one of two copies of Özkaya's original piece from 2005, created for the 9th International Istanbul Biennial, which collapsed just days before the exhibition: "the artist later restored the damaged replica and cast two additional copies, one that remains in Turkey and one of which has been recently acquired by 21c Museum in Louisville, Kentucky."

David's journey from Istanbul to Louisville will include a day-long tour of New York City, where the artist currently lives and works, next Tuesday, March 6. "passing various landmarks [on a lowboy trailer], including Times Square, Museum Mile, and the High Line. The sculpture will be parked in front of the Storefront for Art and Architecture starting at 3pm."The event at Storefront will include a live staging of manifestos, on the topic of Double by a group of distinguished panelists consisting of artists, architects, critics, historians and theorists, discussing the effects, desires and implications in the act of doubling, replicating or copying. The presentation of the manifestos will be followed by a discussion between the presenters moderated by Özkaya. Participants include: Christopher Eamon (independent curator), Cristina Goberna (Fake industries), Alana Heiss (Clocktower Gallery), Spyros Papapetros (Princeton University), Hrag Vartanian (Hyperallergic), and Ines Weizman (Architectural Association School of Architecture London). 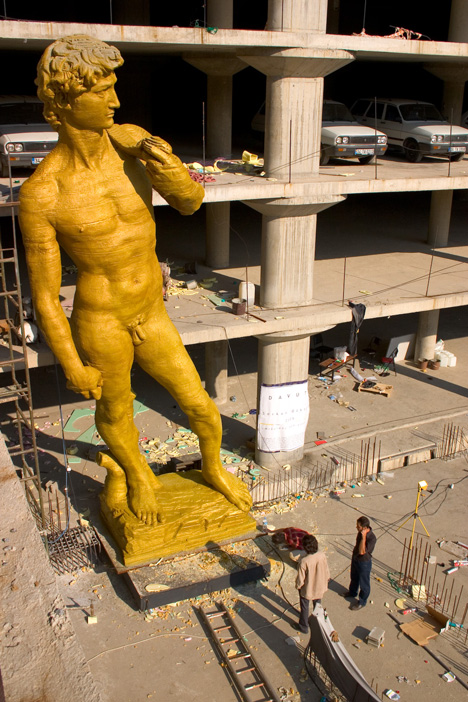 The original 2005 sculpture, via Wikipedia