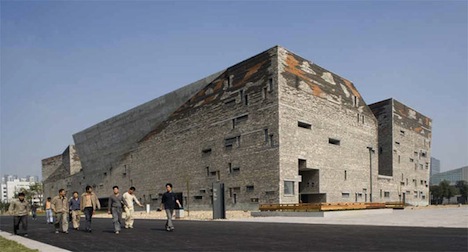 2012 Pritzker Prize-winner Wang Shu has a sense of design that's markedly different from the more typical style of slick, mass-produced architecture prevalent in China today. In fact, his work possesses an intentionally imperfect craftsmanship that is nonetheless "astonishingly beautiful," and his recent Pritzker win can be seen as a major victory for those who boldly reject popular Chinese architecture, something he calls "a learned and copied modern architecture from the Western world [with] no relation to our local life."

Shu lives in Hangzhou, China, where he started Amateur Architecture Studio in 1998 with his wife, Lu Wenyu. He discovered early on that he didn't just want to make "good architecture. I realized," he said in an interview with the Architect's Newspaper, "that it's not just about good architecture, but about the best way to design and to construct. It was a more basic question." So he took himself out of the world of professional architects and instead spent time discussing materials with workers. He turned to renovation, "a rich experience because any time you design something in this field, it's important to see that there are some things that have existed before you. It's not just designing on an empty piece of paper or on an empty site. You have to wonder how you can create something that takes the past and turns it into the future."

Furthermore, renovating allowed him to interact closely with materials. "When you do a renovation for a building you have to touch the materials. It's not just the materials, but it's the way the materials change with time, the weather, or with people's lives. You have to design new things that can co-exist. So now when I design a new building, even on an empty site, my way is very similar to a renovation."

His 'materials first' approach is clear in projects like the Xiangshan campus for the China Academy of Art and the Ningbo History Museum (above), a brutalist masterpiece and my favorite of Shu's work. In fact, Shu is one of few architects who views building as a work in process. Instead of creating hard and fast site plans, he discusses the project with the workers and builders as he goes along, making changes and adjustments to his design up until its completion.

"I prefer to talk about natural materials that aren't artificial. It's not just about an interest in recycled materials. But if you think you are a modern architect or a contemporary architect you should be critiquing reality. Maybe in the next 10 years I'll use other kinds of materials. But in the past 10 years, I felt there was too much demolition and I wanted to propose an answer to that. Of course this is about attitude. On the other side, using this material has led to an architectural way—the craftsman's skills."

Shu views his Pritzker Prize not only as a source of personal encouragement at a moment in his career when he was going to take a step back to focus on his family life, but also as a source of inspiration for younger architects fighting against China's shiny, pseudo-Western architectural style. "In China, "Shu says, "we have many projects, but only a few good projects. Good architecture is not just design, but I think it's closer to a struggle."