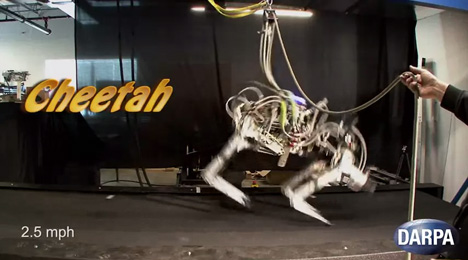 DARPA's mission statement conjures MI6's fictional R&D Department, headed by Q in James Bond films, or Lucius Fox's subterranean lab in The Dark Knight:DARPA's mission is to maintain the technological superiority of the U.S. military and prevent technological surprise from harming our national security by sponsoring revolutionary, high-payoff research bridging the gap between fundamental discoveries and their military use.

In other words, DARPA is more or less tasked with turning science fiction into reality. Case in point, their recent viral video of a svelte robot cheetah hitting its stride at an impressive (and weirdly terrifying) 18mph sprint.

That's a solid 40% increase over the previous record, set by MIT Leg Lab's Planar Biped back in 1989. Indeed, the Cheetah was developed less than ten miles away from Cambridge—a half-hour run when its at top speed—by Boston Dynamics of Waltham, MA, for DARPA's Maximum Mobility and Manipulation (M3) program. (It should come as no surprise that acronyms figure heavily into their project names.) 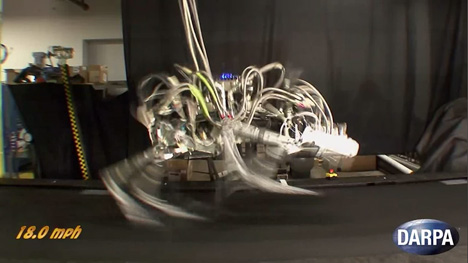 The Cheetah's impressive 3:20 mile is appreciably faster than a human at a clip, though it's worth noting that Usain Bolt has been clocked at a top speed of 28mph... and the animal for which the robot is named tops out at the oft-cited 70mph mark.

Nevertheless, the biomorphic aspect is paramount: "The robot's movements are patterned after those of fast-running animals in nature. The robot increases its stride and running speed by flexing and un-flexing its back on each step, much as an actual cheetah does."

But enough chit-chat, you want to see the effin' thing in action:

Before you ask, the cabling currently provides power and stability... but the Cheetah may well be unleashed, in a manner of speaking, by the end of the year (just in time for Apocalypse, as it were):The current version of the Cheetah robot runs on a laboratory treadmill where it is powered by an off-board hydraulic pump, and uses a boom-like device to keep it running in the center of the treadmill. Testing of a free-running prototype is planned for later this year. 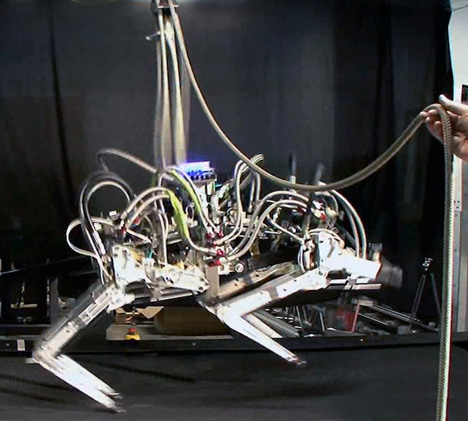 Still, if severing the hydraulic umbilical cord is an easy metaphor for a dystopian future in which robots literally run amok, we can only hope that we're still years (if not decades) away from the Three Laws-defying artificial intelligence that might lead to headlines like "Feral Mech Eviscerates Three More in Amherst, Still at Large." While the robot might be look nightmarish for its lack of a head, so too is its bark—i.e. its horror movie-clomp—worse than its nonexistent bite.