Update [7/24]: The saga continues with a second essay in this ongoing series...

I've long been enamored with Streetsblog's coverage of urbanism, policy, infrastructure and alternative transportation—in short, the future of mobility—and their film production division Streetsfilms is a nice complement to their bread-and-butter of timely transpo-centric online journalism. Their latest video, "From the Netherlands to America: Translating the World's Best Bikeway Designs," is no exception:

This, of course, is the first of the two possibilities for the future of transportation, one that has been fully realized in at least one highly-developed country. For the Dutch, there is no such thing as "cycling culture"; it's simply part of the urban fabric, as much a part of their cities as cars, buses, pedestrians... or even the architecture or weather: cyclists exist, no two ways about it.

Still, I'd be lying if I said that the organic (for lack of a better term) traffic patterns in the video [2:57; 6:21–6:48] led me to discover this computer simulation of driverless vehicles... it also turned up on Streetsblog, via Atlantic Cities, last week.

The yellow ones are subject to human error...

Both blogs linked to Tom Vanderbilt's excellent Wired article on "The Autonomous Car of the Future" from a couple months back, which is probably worth a blog mention of its own (full disclosure, he's on the Writing & Commentary jury for this year's Core77 Design Awards). Vanderbilt provides an insightful, well-researched survey of the current state of (Possibility #2) the driverless automobile: nearly half of the article is dedicated to Google's data-driven approach to ceding the wheel (to an algorithm no less), while the account of Mercedes' efforts in developing 'assistive' driving technology serves a sort of counterpoint.

Of course, insofar as these two projects ultimately overlap quite a bit, Vanderbilt's point is that the main challenges lie not in the technology itself but in public acceptance (including the legal implications) of so-called driverless cars:This brings up the most challenging obstacle on our road to the autonomous-driving future: managing the handoff. For as long as anyone, even Google, is willing to predict, cars will by necessity be semi-autonomous; human drivers will still have to play some role. But figuring out what that role will be is complicated. Are we pilots or copilots? How far out of the loop can we be taken? "We need clear mental models of when you are better at something and when the car is better," Stanford's Nass says. 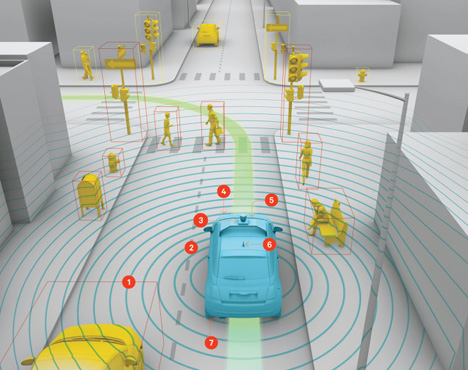 Vanderbilt proceeds to limn the myriad epiphenomena that surround and inform autonomous driving (quoting our columnist Don Norman along the way), broadening the scope of his inquiry into the role of the car in historical and contemporary culture. Here I would add that learning to drive is a near-canonical rite of passage for teenagers across this country and many others, typically the first real step towards independence. Nothing else compares to that initial realization that one can assert some control over his or her own destiny—and, hopefully, is willing to accept the responsibility that comes with operating a machine that is widely deemed to be the most dangerous object that the average individual will use in his or her lifetime.

Which is precisely why an early passage in Vanderbilt's article stood out to me: "Google isn't teaching its computers how to drive. It's collecting data—its cars have driven 200,000 miles in total, recording everything they see—and letting its algorithms figure out the rules on their own."

I learned to drive roughly a decade ago, but I don't recall anywhere near as intensive a process of 'para-learning'—i.e. going beyond how to operate the motor vehicle itself, beyond the rules of the road, to figure out how other cars, pedestrians and cyclists (admittedly few and far between in greater suburbia) actually behave in the real world. Even after logging thousands of miles since those high school days and, like the majority of drivers on the road, gleaning the fast-and-loose conventions of lanes and lights, I'll readily concede that my capacity for 'reading the road' is nowhere near that of radars, LIDARs, infrared cameras, etc. 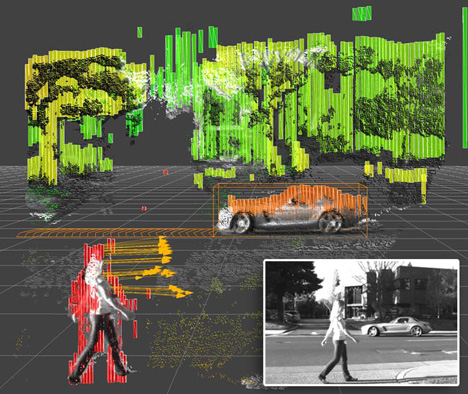 But I'll also assert with measured pride that I'm easily more astute and familiar with the highly capricious traffic patterns of Lower Manhattan and Upper Brooklyn (can that be a real thing?) than the average New York City resident... simply because the bicycle is my primary mode of transportation. Besides the sheer repetition of daily commuting and necessary awareness that is the very premise of urban riding, the visceral immediacy of navigating a busy street demands a near-algorithmic ability to act and react based on a constant deluge of sensory data. I don't intend to come across as boastful or superior; it's simply the nature of negotiating the cutthroat and otherwise inscrutable traffic patterns of motorists in such a dense environment. And if I can't prove my suspicion that bike-commuting has actually made me a better driver, I can safely say that I now regard roads with a more discerning eye, whether I'm on foot, in the saddle or behind the wheel (again, not bragging, I swear).

Which is a long way of saying that the automobile, by definition, affords a degree of isolation from the external world, one that can only be enhanced by computer input and feedback. While I can only aspire to logging 200,000 miles by bicycle in my entire lifetime (I'm 40 years out at this rate; Strava tells me I just hit the 1,000-mile mark for 2012... and yes, now I'm bragging), I also can't imagine being anywhere near as attuned to my surroundings when I'm in the plush, climate-controlled confines of a car versus my exposed perch atop a 20-lb array of metal, rubber and leather. The fact that even a Smart Car is larger, heavier, faster and more powerful than a bicycle by an order of magnitude on all accounts means that the decision-making process is similarly more demanding.*

Conversely, the argument that driving can be fun in itself—Vanderbilt quotes Updike as he makes this point, and I relate to the sentiment, despite (or perhaps because) I have the luxury of not being stuck in traffic for untold hours on a daily basis—also applies to cycling. Granted, the sense of speed and power is at once attenuated and amplified by the fact that the rider directly supplies the fuel for the vehicle, but the immediate appeal is one in the same: the sensation of freedom, the closest approximation to being able to fly. 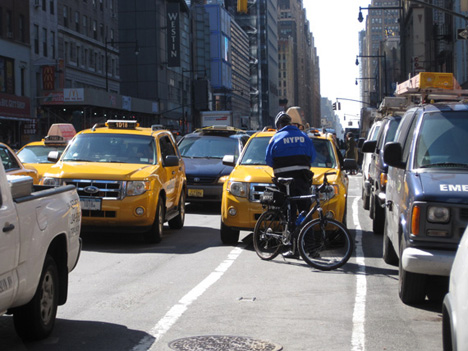 So yes, this is simply a more nuanced (or so I hope) version of the righteous 'car=bad, bike=good' argument. I know full well that it probably comes across as preachy—and not to detract from Streetsblog's much-appreciated efforts, but like any semi-niche publication, I'd say 99% of their readers will agree with their lucidly-argued points. It's been said before, but it bears repeating: the challenge, as always, is to raise awareness for non-cyclists, many of whom probably stopped reading after the first sentence, or switched over to, say, Facebook (possibly, as Vanderbilt notes, in their Mercedes) after the first 30 seconds of the video.

Case in point, Core77 readers may remember our coverage of the 2012 SHOT Show. At risk of stoking those embers, I was interested to see the not-quite-constructive dialogue unfold in the comments; who knows if any of the gun-control contrarians (or their outspoken right-wing rivals) actually read our contributor Barbara Eldredge's bio, much less her introductory statement. For some, her research interests were trivial in the face of the topic at hand: an instrument designed to inflict harm simply has no place in certain value systems.

Firearms are, of course, perhaps the most extreme example of a politicized powderkeg, so to speak, but (the fact that cars can also be lethal weapons aside) I was struck by an offhand comment that Barbara herself made in retrospect. After we'd published the half-dozen posts about the show, she mentioned that she felt that guns may eventually be regarded as purely recreational devices, à la the bow & arrow, as they become an obsolete design object in the face of modern combat (the jury's still out on the Cheetah; smart money, for better or worse, is on unmanned drones).

It's a bold prediction, predicated on an imperfect analogy—firearms are not likely to be replaced by, say, lasers in the same way that they surpassed manually-powered weaponry—but one that might also apply to automobiles as well. To that end, I'd like to point out that no one would even consider inventing a self-riding bicycle (motorized yes, but not an autonomous machine, at least as far as I know). People ride bicycles because they choose to do so, to have the experience of speed, freedom and control, and the very fact that the autonomous car is considered to be both futuristic and worthy of research is because operating a motor vehicle increasingly seems like a chore.

If this seems like a moot or rhetorical point, I'll be more blunt: the appeal of driving, as an activity, is the same as that of riding a bike. Robots can handle the rest.

*There is certainly a sense that both car and bike can feel like an extension of one's body, where a driver or rider assumes a sense of volume and velocity specific to his or her vehicle; this phenomenon is precisely the fun of each activity. I could elaborate, at length, about why this sensation is far more direct (and consummate) on two wheels as opposed to four, but the point here is that the formidable power of the internal combustion engine necessitates augmented spatial awareness in equal measure, i.e. a level of hypervigilance that is entirely beyond human capacity.