Sparkling or tap? Gas or no gas? Fizzy or flat? It's one of those broadly European trends that ’muricans might regard as a bit too, well, posh for their tastes: the option of sparkling water at just about every Trattoria and Rathskeller on a certain side of the Chunnel. (Which is not to say that it hasn't caught on here in New York City; all else equal, a friend once picked a restaurant because it served free sparkling water.)

Meanwhile, sugary-sweet sodas are a uniquely American phenomenon, and if I come from the last generation of kids whose parents condoned the occasional jolt of HFCS—even my most health-conscious friends admit to craving a can of Coke every now and then—there's no denying that the magic of carbonation works wonders for otherwise unremarkable beverages.

Whatever your taste, those of you who can't get enough of that tingly sensation have several new options to choose from. 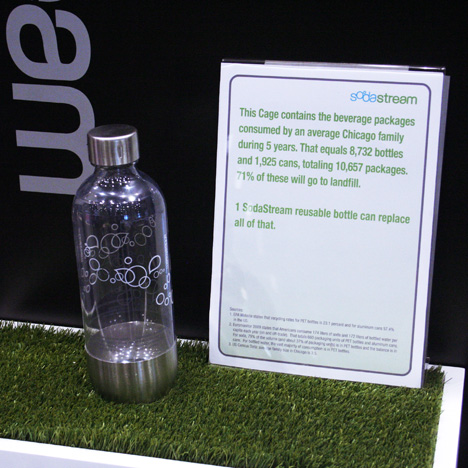 SodaStream's household carbonators date back to the turn of the century, but they've experienced a recent resurgence as of the late aughts with their tap-like, non-electrical countertop appliance that carbonates run-of-the-mill tap water with the push of a button (or three). It's another take on the Gillette model: the CO2 cartridges can be refilled at various locations, but the money is in their flavor offerings. 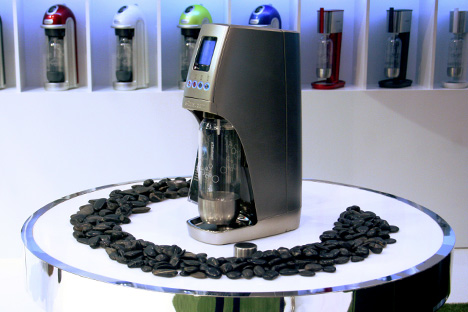 Indeed, the past few years have seen strong growth in the home carbonation market: the company had one of the more elaborate booths in the show, featuring a 3D in a custom viewing station, as well as a 're-cyclist' circling McCormick place in a pedicab retrofitted with a cage full of recycled bottles, a smaller scale version of the one at their booth. SodaStream's latest offering is their first fully automated (electric) soda machine, boasting three levels of carbonation. 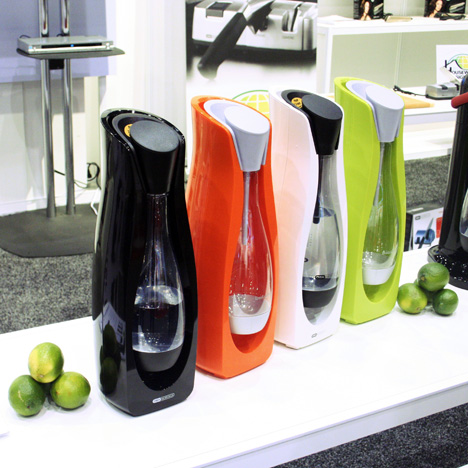 OBH Nordica has entered the carbonation game with a pair of curvier home soda makers, boasting "elegant Scandinavian design." For now, the devices are expressly meant to make soda water—no flavor syrup to speak of—but given its European appeal, the lack of extraneous offerings is entirely in keeping with OBH Nordica's roots. 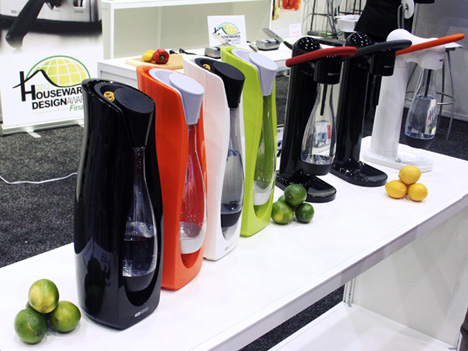 The SodaMaster Freestyle (above right) joins the Gazelle (above left) in their 2012 product lineup.

If the tap-like form factor of Sodastream and OBH Nordica's offerings doesn't float your boat (or root beer), ISI's wand-like carbonator is a worthy new contendor in the home soda category. Don't be fooled by its potentially cringeworthy (albeit accurate) name: the "Twist 'n Sparkle" uses an entirely different carbonation mechanism, where the handheld device is attached ('twist') to the top of a special bottle; once it forms an airtight seal, the wand carbonate ('sparkle') to the liquid within. In addition to its versatility in terms of size and storage, the "Twist 'n Sparkle" can be used with any liquid—not just plain ol' H2O—from orange juice and coffee (yes, it's a real thing) in the morning to wine and spirits at night, transforming a mundane potable into a fizzy potion. 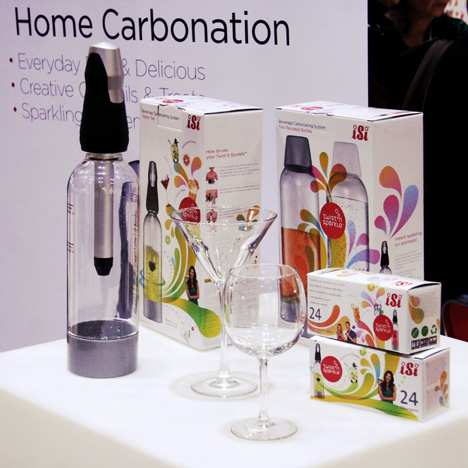 These advantages come at the expense of its air supply: each bottle of takes a single-use canister of CO2. They come in around 80 cents apiece in bulk and they're recyclable, making them at least a bit more cost-effective than a can of sodapop... and we can't understate the appeal of turning just about any beverage into a bottle of bubbly. 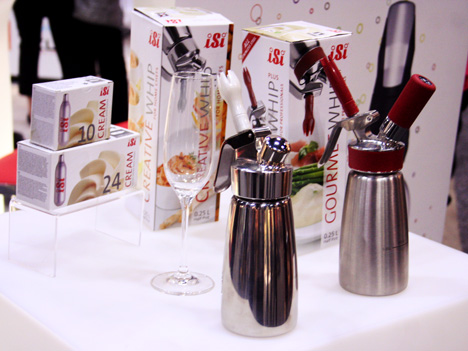 ISI is also pleased to demo their more powerful product, the "Creative Whip," a home-foaming device that doubles as an infuser (and triples as a carbonator). The handheld appliance takes NOS as opposed to CO2, and can be used for a wide variety of interesting applications for aspiring gastronomers and mixologists. I can't say that I'm anywhere near an expert on molecular gastronomy (let's just say WD-40 and Alinea are a bit out of my range), but I highly recommend the delicious St. Germain foam that they were offering as samples.