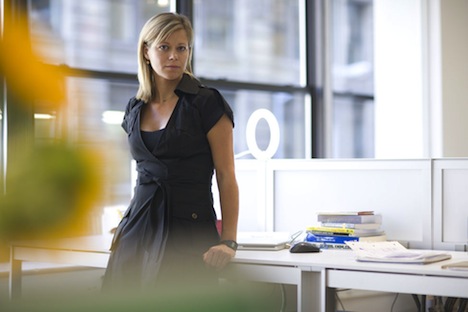 Is design criticism alive and kicking? Celebrating the inclusion of Design Writing & Commentary as a new category of entry for the 2012 Core77 Design Awards, Core77 Editor in Chief Allan Chochinov sat down with Jury Captain (and Chair of MFA in Design Criticism at School of Visual Arts) Alice Twemlow to talk about misconceptions of the field, her "deep bench" of co-jurors and demolition derbies! Core77 Design Award entrants can get a sneak peek at what this year's jurors will be looking for in the Design Writing & Commentary category in the first of our 2012 "Meet the Jury" posts.

Allan Chochinov: Let's start from the beginning Alice. For the upcoming 2012 Awards program, Core77 has added a new category called Design Writing and Commentary. As the jury captain for this category, can you first start by telling us a bit about the jury team you've selected?

Alice Twemlow: Well I think I've selected a magnificent jury team! We're asking for people to submit writing about objects, spaces and systems—designed things and all the ideas, infrastructures, social and economic forces, uses and resistances that connect and disconnect them. So it's clear we need a team of jurors who are both experts in their subject areas and sufficiently nimble to cross their boundaries. I also wanted to plant the seeds for a good debate when we meet to discuss our decisions on the entries so I made sure to assemble jurors who take different approaches to their own writing and who have strong views on what matters both in writing and in design.

Michael Sorkin, Distinguished Professor of Architecture and Director of the Graduate Program in Urban Design at the City College of New York, and founder of Michael Sorkin Studio represents academia and architectural practice but also the kind of fiery writing fuelled by political beliefs that I truly admire. With a long career in journalism, Michael is the most seasoned of the group and will help give us the long view, and help to counteract a tendency in much online writing to ignore the long and rich history of design writing.

Maria Popova is the editor of Brain Pickings, a selective online inventory of fascinating information about, and insights into, a vast array of topics. She has an excellent grasp of contemporary issues in design and the interconnected nature of design's significance. She also appreciates new and experimental approaches to, and venues for, writing which I feel will play an important part in this competition, influenced perhaps by Core77's own innovations with regard to format and approach.

In examining the political power structures that shape our designed environment and the systems through which designed entities move, Tom Vanderbilt's books Traffic and Survival City: Adventures Among the Ruins of Atomic America, represent the direction that good writing about design is headed. Tom understands the difference between point of view and polemic and is a master of deep research. When we all meet as a jury in June we will surely end up debating the finer points of approach, style, methods, and ideology, but I can say with assurance that the writers we will be commending will be rigorous researchers and reporters, spirited arguers, deft wordsmiths and vivid storytellers.

That is a deep bench indeed. As you've been on many design juries in the past, how do you anticipate jurying "design writing" differing from other enterprises of design?

The challenge of jurying design writing is, of course, the time that it takes to read, and re-read the entries, to check out the references, familiarize yourself with the work being discussed and so on. But that is also what is so great about it. With design competitions jurors often default to their gut reactions and are either repulsed or seduced by a design based on a first glimpse of a designed product or poster. With design writing there is much less chance of that happening. We'll have the entries weeks in advance of our jury meeting; they'll be on our desks, in our bags and on our screens and we'll be spending considerable amounts of time with them. We'll have to read these pieces through to the end, mark them up with our questions and comments, and prepare points for our discussion in June—all of which means that jurors of design writing spend much more time with the entries than they probably would with designed products.

Many people have argued that "there is no design criticism" at a time when there seems to be more to read about design than ever. And not all of it of the "look at this cool thing" sort of discourse—if you can call it that. You chair the acclaimed MFA Design Criticism program at the School of Visual Arts in New York City, and you're probably closer to this argument than most. Is it just that there isn't much design criticism "on paper" these days? (And here I'm not so sure either, since more and more journals seem be be appearing, with some of the larger design firms publishing their own magazines and publications discussing—with increasing rigor—the state of design, design research, strategy, culture, sustainability, anthropology and various products of design.)

It's natural to be confused about this, and I don't think there is a clear answer to this question, because, as you point out, there's a disconnect between the popular perception of design criticism and its actual state. There is some fantastic design criticism being published right now—by Michael Kimmelman in The New York Times, by Alison Arieff in The Atlantic Cities, by Justin McGuirk in The Guardian, by Alice Rawsthorn in the Herald Tribune, Nicholson Baker in The New Yorker, Scott Stowell in today's Very Short List, and so on. So it's certainly there and I would contend that the D-Crit students are producing more of it. But people have a tense relationship to design criticism, and will constantly announce its "death" or bemoan its non-existence. I'm doing doctoral research into the history of design criticism and this sounding of the death knell has been a recurrent theme all throughout the discipline's history, extending back to the 19th century design reformists. So I'm afraid I glaze over a little when I hear the "there's no design criticism" line of argument being taken up by designers. They should get out and read more!

What's exciting about the Core77 competition is that I think it will bring to the surface some of this excellent writing that's out there but has possibly been lurking beneath the design community's short-sighted radar. We've purposefully labeled it "Writing and Commentary" rather than "Criticism," which, as a descriptor, tends to send designers into a bit of a tailspin. "Writing and Commentary" will hopefully liberate people from the current misconceptions about design criticism and make way for all sorts and shapes of writing about design's many flavors.

What kinds of people (and projects) do you imagine entering the Awards Program this year? Can you give a few examples?

I'm looking forward to reading manifestos about ethics or pizza by designers; blog posts about apps, bridges, or urban farms by freelance journalists; reviews of the designed aspects of demolition derbies or restaurants by fiction writers; philosophical treatises on public space or the politics of invisible design by academics; riveting biographical profiles of designers by staff writers—anything and everything that anyone in the extended Core77 community cares about!