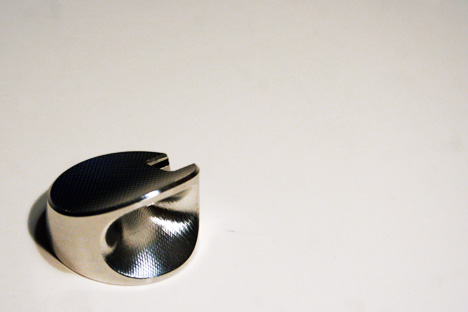 It's not rocket science—nor is it the first acoustic iPhone speaker we've seen, though it might just be the smallest—just dedication to the craft, a decent work ethic and commitment to quality: we're pleased to report that the upstarts at Kinetic Custom Machine have reached their funding goal for their first Kickstarter project, "Sonastand," as of last Thursday afternoon. Like many All-American entrepreneurial stories we're hearing these days, it's a timely tale of a couple young fellas, Colin Chu and Bob Wimbrow, with a dream and a CNC machine. 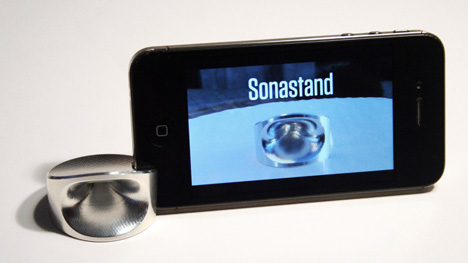 Colin found a worthy counterpart in Bob when they were juniors in high school whose hobbies included building model rocket cars and modding paintball guns—"thinking back on it, we played with fire quite frequently"—with vague dreams of making stuff for a living. They went their separate ways after high school (I'm picturing something like the last scene of Superbad): Bob completed his B.S. in Physics at UC Riverside, Bob ended up on the East Coast, working in the solar industry, while Colin put his International Studies degree to use as an English teacher in Japan, where "he became increasingly fascinated by the fact that every person I observed working was doing it to the best of their abilities." 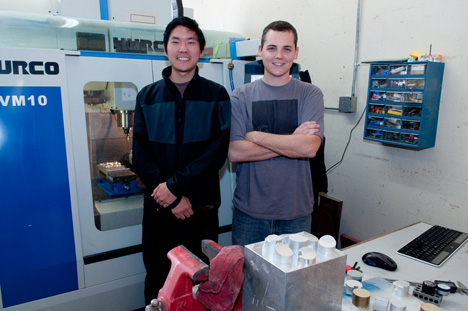 Their disparate paths led them back to California, where they finally had the means to fulfill their longtime dream of owning a CNC machine. To hear Bob tell it, I can't help but think that a bench-top lathe might have put me on a completely different path myself:My first exposure to metalworking was in high school working for Blume Engineering where I worked with a (Prazi D6000) bench-top lathe. I was blown away by the process of metal cutting, the forces involved, and the accuracy/beauty of the result. I've had a thing for these machines and what they can do ever since. Being a computer guy from a very young age, the idea of combining the accuracy of these machines with computer numeric control (CNC) blew my mind. What a potent combination! 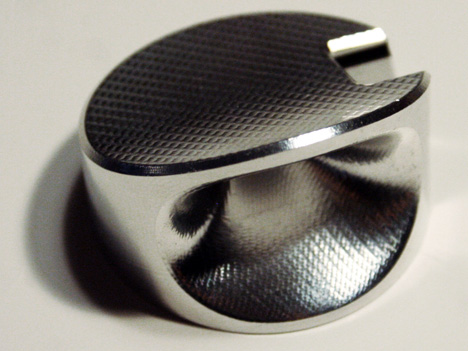 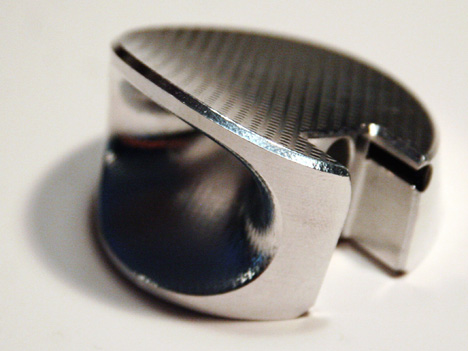 The "Sonastand" is not only their first Kickstarter project but the "first product from [their] long list of ideas," and it will be available through the de facto venue for DIY product design these days for another month or so. Colin notes that they could have used Don Lehman's advice regarding shipping when they launched their project, adding his own take on the Crowdfunding Revolution, the topic du jour:One thing that I enjoy is cutting out investors and middlemen. For sure there is a lot of benefit to investors, but at least in our case, we don't want to have to report back to our investors and update them on how much profit we are making. I've told potential investors that "it's our company, our ideas, our products, and we would like to keep it that way", and Kickstarter helps with that. I feel like the hardest thing to do as a new company is to raise capital and Kickstarter allows that to be possible. The market decides what is worthy. 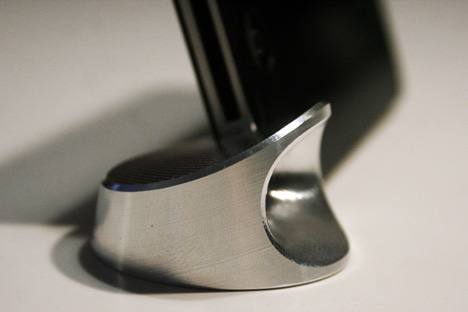 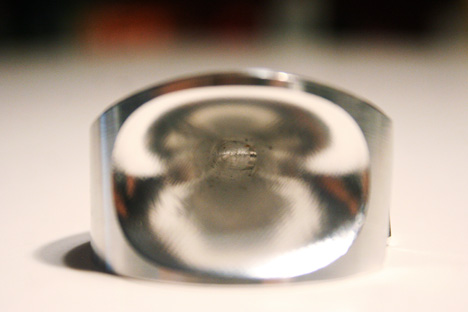 The Kinetic Custom Machine was kind enough to send us a couple "Sonastands" (they come in different sizes to accommodate different cases) and we can attest to their efficacy. You're not going to get stomach-rumbling bass out of the elegant aluminum accessory, but it makes a world of difference when it comes to mids and highs. It hasn't attained everyday-carry status for me—I'm a keys-wallet-phone kinda guy—but it's handy to have in my backpack as an alternative to earbuds. One tiny complaint: the iPhone 'slot' is the slightest bit too big, such that an errant hand might tip it over (a couple strips of tape did the trick to narrow the gap). 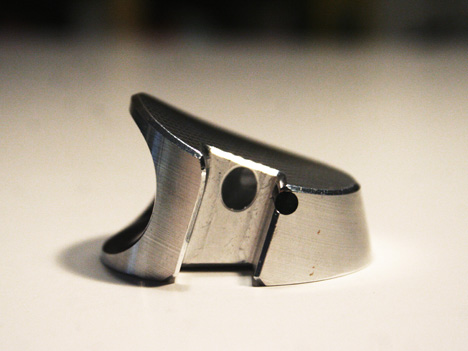 The black spot on the right is actually a strip of rubber for grip; I added just a few strips of tape (not pictured) to the opposite face of the slot.

Update from Colin: "We've been at the shop the past couple of days doing a bit of tweaking, and one of the things we have changed is making the slot tighter for the uncased versions." He notes that the ability to "make changes on the fly" and respond to feedback quickly is precisely the advantage of owning and operating their own manufacturing process. "We have made a couple more tweaks that makes the stand more stable (we didn't think it was unstable, but more stability is always better right?) and it actually sounds even better."

The creative chronicle, as told by Colin Chu himself:The story of Kinetic Custom Machine starts with two friends. Bob and I first met in our 3rd year of high school. We immediately bonded while building model rocket cars and flame throwers after school. Even then it was clear that he was captivated by the process of metal cutting and its results. Bob always talked about how he wanted a CNC milling machine; it's kind of all he's ever really talked about. We grew up together, taking trips to the desert exploring abandoned mine shafts, having LAN parties and dreaming of one day making some of the crazy inventions in our minds.

Bob's passion for machines and machining spread to me, and after a while, owning and operating a CNC mill became a dream shared by us both. We've always loved making stuff, and a CNC mill has the amazing ability to cut materials into almost any imaginable shape with mind blowing accuracy.

After high school, together with another friend, we started a little company called KinetiComponents. We designed an electronic trigger mechanism for a paintball gun called the Autococker. We made a working electro-pneumatic 3way valve and had working electronics, but being freshmen in college, we didn't have the capital to move forward with production. KinetiComponents failed to manifest into anything. 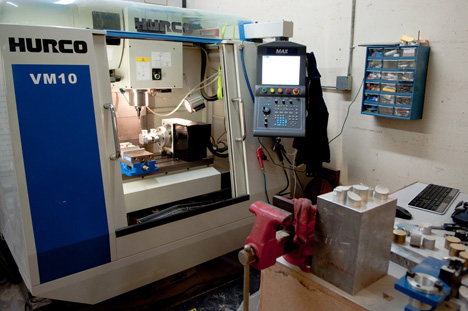 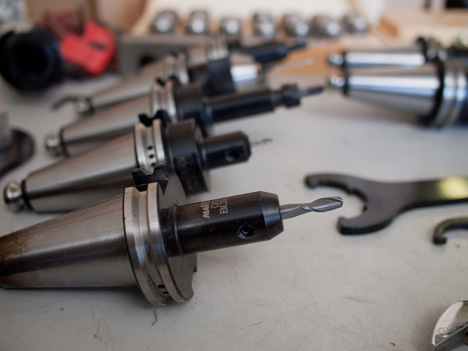 After graduating from college, Bob with a degree in Physics from UC Riverside and myself with a degree in International Studies from UC Irvine, we ended up in separate parts of the world. Bob immediately landed a job at SunEdison, a small but rapidly growing commercial scale solar company. Shortly after he was hired, the company decided to move their operations to Beltsville, Maryland, and 2 months later he found himself living on the East Coast. He worked as an engineer there and later transferred to the R&D team, where he designed software to simulate energy output uncertainty and optimize solar array layout. Reflecting on that time Bob says, "What little I know about business, I learned there. Things like what motivates people, how to make decisions under pressure, and what is an acceptable risk. I also learned how much time can be wasted in meetings and how communication slows as a company grows."

During that time, I was teaching English in Japan and really enjoying it. Looking back, it was there that I really found my identity, and honed my way of thinking. I fell in love with the Japanese way of craft, which is to pursue perfection in everything you do. I became increasingly fascinated by the fact that every person I observed working was doing it to the best of their abilities. You'll never find a better made McDonald's hamburger than in Japan. One of the overarching observations throughout my time there was that the people of Japan see the value in quality. It's in everything they do, in the things they buy, and in the products they produce. 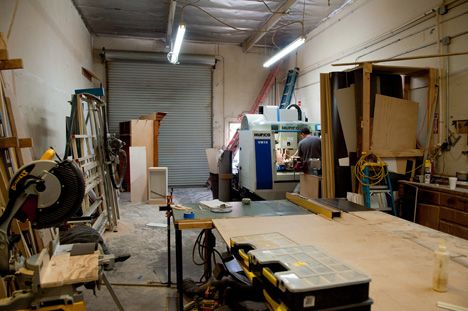 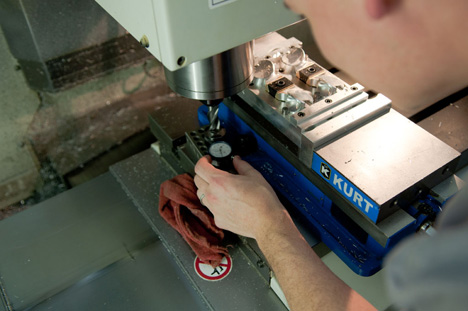 With a bit of luck, Bob transferred himself back to California about a year after my time was up in Japan. I was working for an importer of Japanese race car parts at the time, but was eager to do something more creative. Bob was getting burnt out on corporate America, so once again we were in the same state, both physically and mentally. We frequently talked about our dream of owning a CNC mill, and starting a viable business making quality products. I always had an idea of a cool acoustic stand for the iPhone, I brought it up, and we ran with it. That was the beginning of the Sonastand. We moved forward and bought the machine. After some difficulty putting it in my garage due to the City's zoning enforcement, we were able to sublet a corner of a friend's carpentry shop. That's where we work out of right now, and although dusty, it's actually turned out quite nicely. 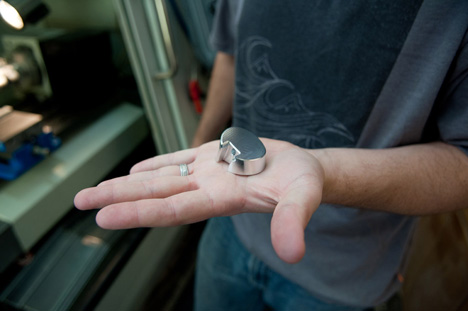 This, of course, is just the start for Colin and Bob, and we'll definitely keep our eye on the Kinetic Custom Machine as they forge ahead with their plans...We don't consider ourselves designers or machinists, we consider ourselves novices. That being said, we're pursuing this because we'd like to become masters. We have a lot to learn and we learn best by doing.

Here at Kinetic Custom Machine we enjoy simplicity, beauty, and blending form with function. We realize that the details matter. We know that there is value in putting in the hard work ourselves and not outsourcing to China. But above all, we believe in ourselves and our pursuit of quality. 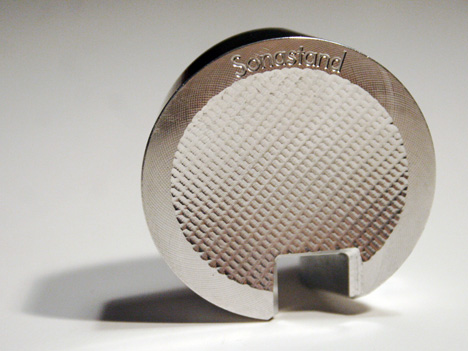 What's next for Kinetic Custom Machine? We are all about quality and efficiency, so the immediate challenge facing us is to scale our production to meet demand. We want to stay as small as possible for as long as possible to remain nimble and flexible. In the slightly longer term we have a few high quality products in mind, some of which have been done before, although perhaps not done as well as they could be. Our long term goals transcend consumer products and get back to our roots as inventive kids who love to create. 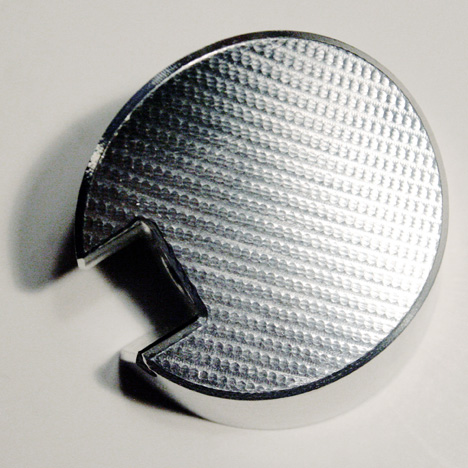