Extending the Network: Increasing Wi-Fi Access with Humans and Robots 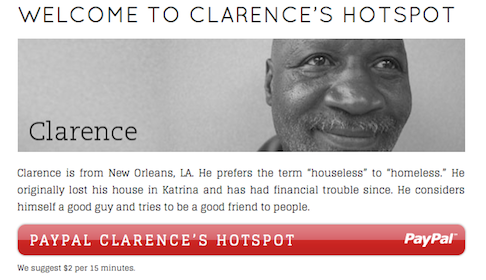 Homeless Hotspots features profiles of some of the people carrying wi-fi signals, along with a suggested fee to be paid for the service. Screenshot from http://homelesshotspots.org

We love to be connected. Thanks to wireless 3G networks, it's easier than ever to check email and Twitter, talk on the phone, pay your bills, watch videos and post pictures from virtually anywhere and at any time. But it's not fast enough—wireless internet is still the fastest way to get online with a mobile smartphone or tablet.

Recently at SxSW, a project called Homeless Hotspots sparked a heated debate online. A great post at NPR linked to the flurry of media about the project, such as quotable quotes like Wired declaring it "like something out of a satirical science-fiction dystopia."

The project had more prosaic goals, which was to update the analog practice of street newspapers as a source of revenue for those without homes:Our hope is to create a modern version of this successful model, offering homeless individuals an opportunity to sell a digital service instead of a material commodity. SxSW Interactive attendees can pay what they like to access 4G networks carried by our homeless collaborators. This service is intended to deliver on the demand for better transit connectivity during the conference.

BBH Labs defended their project in a length blog post, emphasizing that the participants were compensated for their work. It's a thoughtful post worth reading.

I started thinking about Liam Young's Electronic Countermeasures project, which has been making the rounds on social media. Young's project reflected on the need for constant connection through a more robotic means. The video feels like a scene from Close Encounters of the Third Kind. But this time, our alien friends aren't delivering news from outer space: they're bringing us the Internet.

In his video description, Young expands on the sci-fi nature of his work, which reimagines quadcopters as a pirate network of wi-fi routers that quickly disperse and reconfigure throughout cities:We have built a flock of GPS enabled quadcopter drones from components that were originally intended for aerial reconnaissance and police surveillance to create this flying pirate file sharing network. The drones are autonomous and drift above the public spaces of the city as a balletic interactive aerial choreography. Part nomadic infrastructure and part robotic swarm we have rebuilt and programmed the drones to broadcast their own local wi-fi network as a form of aerial Napster. They swarm into formation, broadcasting their pirate network, and then disperse, escaping detection, only to reform elsewhere.

It's a stunning image, these magic Golden Snitches that we desperately try to catch with our phones.I've written about Korea's ubiquitous connectivity before, but here it becomes relevant again. I remember climbing up to the top of Mt. Cheonggyesan in Seoul with friends. One friend pulled out his phone, and there it was: a wi-fi signal. In Seoul and throughout much of Korea, I found wi-fi routers installed on buses and trains, and access was everywhere, with different companies providing competing rates.

Here in the US, cities like West Hollywood and Philadelphia have long experimented with free, city-wide access, with mixed results. Other services, like Wi-Fi Finder, help you locate free wi-fi signals with your smartphone. And I remember when "hobo symbols" were repurposed to indicate the presence of wi-fi hotspots in the area, a practice known as warchalking.

And just last year, Obama announced an initiative to provide wireless access across the country. The five-year plan aims to cover 98% of the United States with a wi-fi signal, thus increasing much needed access especially to rural areas. He asked for at least $5 billion to be invested in rural infrastructure, but the plan is also expected to bring in nearly $10 billion in revenue. Free wi-fi certainly costs a lot. 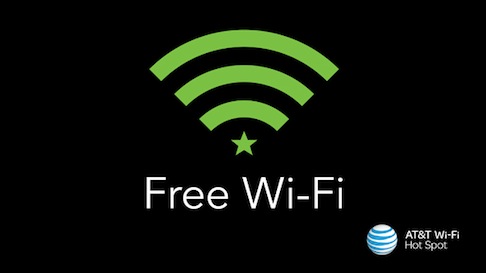 Starbucks in the US now offers free, unlimited wifi to all patrons. Image via starbucks.com

When I check my email constantly, swiping my thumb up and down for a refresh of whatever social media app I have open, I'm accessing a broad 3G network. But wi-fi is still king when it comes to connectivity, and we're constantly looking for new ways to stay connected. In an age when even Starbucks now offers free wi-fi, it can be easy to forget that all this access comes at a price.

For providers, that means finding all kinds of ways to raise money for service and get the service out there. In the future, your nearest wireless access point might just come from a homeless person, or a flying robot, or maybe it will just be as simple as a router quietly installed on top of a mountain. But the access costs something, and the costs are covered somewhere.

Extending the Network: Increasing Wi-Fi Access with Humans and Robots