Tiny Cameras Continue to Provide Stunning Footage, and Crazy Horst Has a Plane to Catch

We love what can happen when a disruptive technology is introduced to a creative generation of people, and we still feel we haven't seen all the possibilities engendered by miniaturized cameras. But we're getting closer. Two years ago we wrote about pioneer Eric Austin's RC-helicopter-mounted cameras, predicting he'd become a rich man; since then he's shot for Nike, ABC, Dreamworks, Discovery, and other networks. Last year we showed you some amazing footage shot by an anonymous Polish citizen's similar RoboKopter rig. And this year, a German enthusiast operating under the handle "Crazy Horst" is making the blog rounds for his incredible GoPro-camera-plus-RC-plane, rather than helicopter, footage.

We're not sure if flying an RC plane is easier or more difficult than flying an RC helicopter, but the footage is certainly different. Because the plane is always moving forward the cinematography has an intrinsic flow to it, not to mention the capability of attaining higher altitudes. Here's one of Crazy Horst's demo reels:

In the videos you see him throw the plane to get it started, like a soldier throwing a drone... 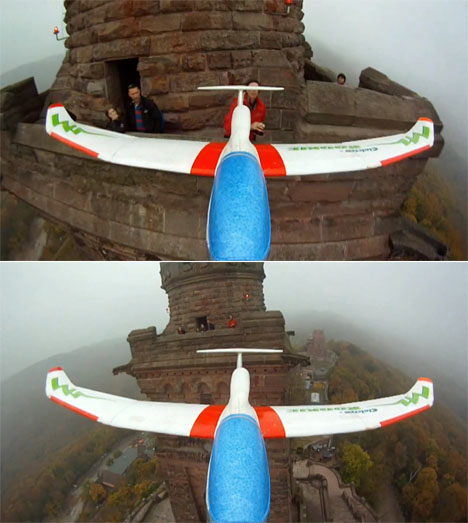 ...but you must wonder how he retrieves the thing. Some of you will find it obvious, others will be surprised:

Tiny Cameras Continue to Provide Stunning Footage, and Crazy Horst Has a Plane to Catch