We love Paper by FiftyThree: New Sketching App for iPad 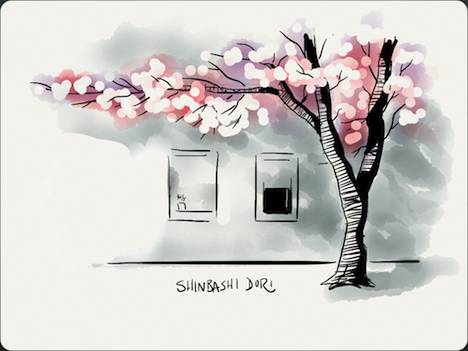 Image above courtesy of Paper

We had the opportunity to preview the new sketching application Paper by FiftyThree for the iPad. The web video showing their application makes it look easy and beautiful, but, as they say, art is hard. Our previous efforts with iPad sketching applications (Alias Sketchbook Pro) looked nothing like Jim Lee's Batman. No surprise there.

The finger has always been a blunt instrument, unless you happen to be gifted with especially pointy ones. Transparent Capacitive styluses allow a slightly better correlation between the visible contact surface and the actual point, but there is no substitute for pen and paper (though the Wacom Cintiq comes close). 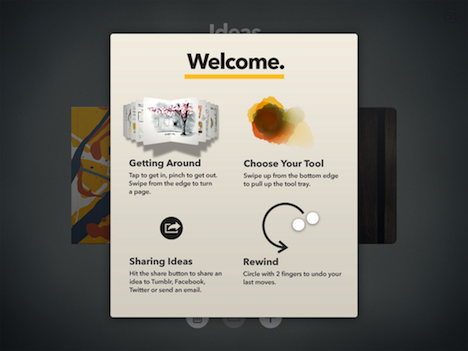 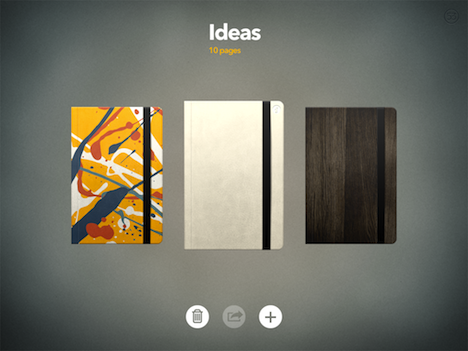 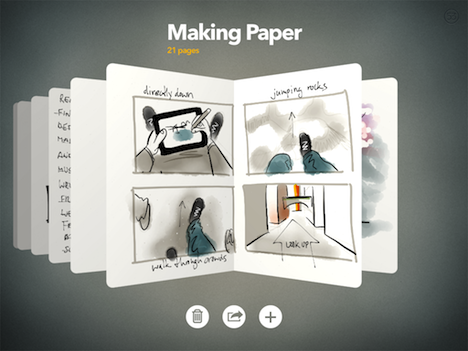 Paper favors gestures to click menus and "napkin" sketches race by compared to other applications we've seen. The ability to overlay watercolor on existing drawings makes highlighting and indication a breeze. Much as they may try, design professors attempting to make students "loose" often fail because we can't help but be precious. By limiting the toolset, and especially due to the absence of layers, zoom and brush size, there isn't really any way to be fussy with Paper although I certainly tried. Instead of spending lots of time with one idea, the hope is that you create many.Given the initial absence of ideas any blank canvas offers, I chose to start with the Core77 logo to get a feel for the program. Sketchy layout worked marvelously. The pencil tool, particularly when combined with a light color, allowed us to create the skeleton of virtually any idea. Given the slightly puffy tip of my stylus, detail work was near impossible, particularly without the zoom. When I finished the layout I desperately wished for cut and paste, because I hadn't left enough space for the "C." Other than watercolor, there was no tool for large fill, as brush sizes (or pen sizes) did not appear to be scaleable. I used the eraser as a blunt instrument to cut out the brushy middle and then filled it with marker. By the time I redid the drop shadow, it became evident that markers were mildly transparent (as they should be). 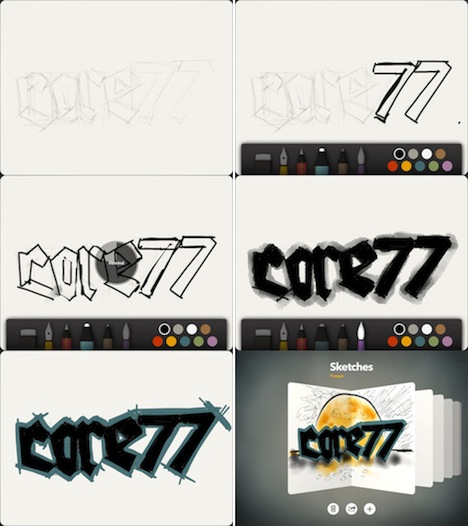 Slightly more comfortable with the program, I tackled a self-portrait, demonstrating thoroughly that I'm no fine artist. Feel free to laugh at my efforts, though I encourage you to do better. At this stage, I would have killed for zoom or layers. I was also occasionally flummoxed by their undo, which has been conceptualized as "rewind." It requires a twist of the fingers, but then seemed to function better with a slide than with continued twisting. 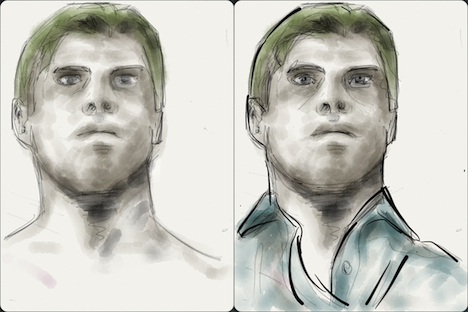 After the portrait, we got down to business. A set of wireframes I'd worked on for another project took no more than two minutes to sketch and color...impossible under any other circumstances. 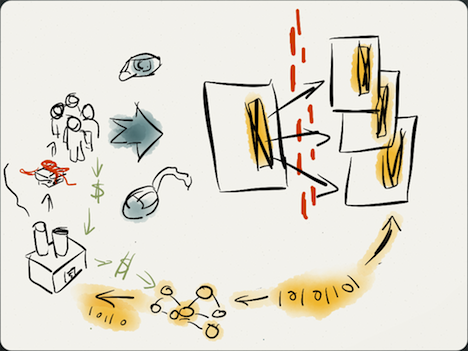 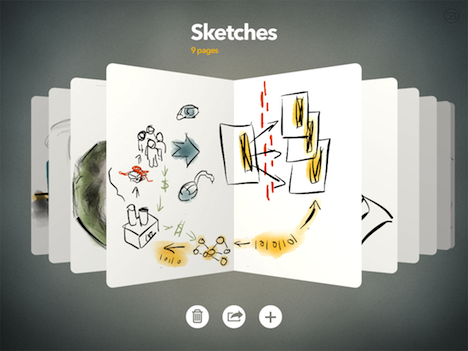 I'd neglected the pen tools (ballpoint and fountain) so I futzed around for moment (1 minute) and banged out a profile that looked like a Hirschfeld. I kid, it looked much worse than a Hirschfeld). The fountain pen works quickly, but to me, it was counterintuitive. The faster you go, the wider the mark. I'd have preferred the other way around. 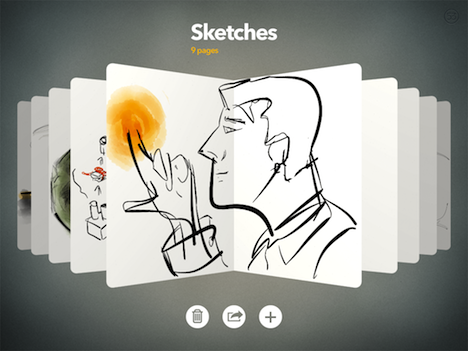 Finally, I wrapped up my finger metaphor with a mixed media (also fast, maybe 2 minutes). Again, the results weren't exactly "good," but they sure were expressive. 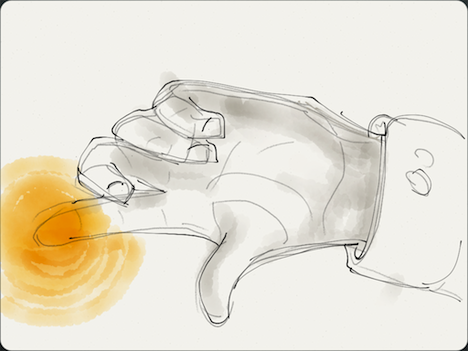 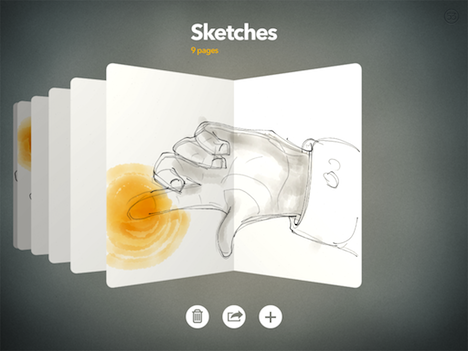 In summation, Paper makes napkinless sketches pretty and colorful, but sacrifices some of the fidelity of Wacom/Cintiq/Sketchbook Pro . We've seen no way to generate content faster, and there certainly isn't a way to get them on paper as rapidly either. In V2, we'd hope for a zoom function, and perhaps layers. With those tools, this reviewer would have had the tools to be fussy. Then again, that wasn't the point. For now, I'll still try to carry my Moleskine, but in the event that I'm in the subway with only my iPad and Paper, I'll have all the tools I need. 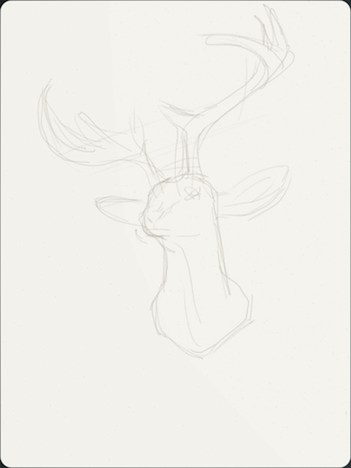 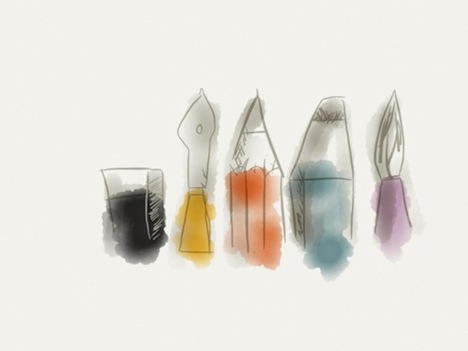 Sketch courtesy of Paper by FiftyThree, Artwork by David Lu

Paper by FiftyThree is available for free on the iPad which inludes the first tool, Draw. Additional tools are available starting at $1.99 from the in-app store. Check out more sketches created with Paper, here.