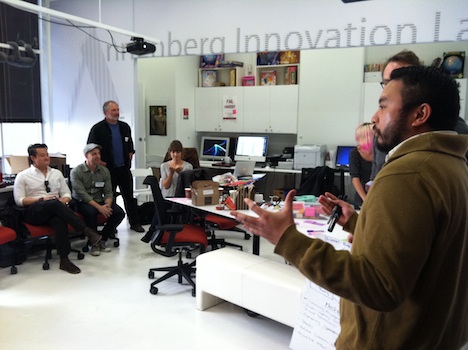 At USC's Annenberg Innovation Lab, groups presented on their ideas for improving the city.

Los Angeles is a city without a center. A recent exhibition across the street from LACMA gave away donuts as a testament to this fact—concentric circles that are quite good, which literally have nothing in the middle. And yet, as the second largest city in the United States, with a record number of people moving in and out, it's certainly dynamic and lively, and anyone who lives hear knows it's a hub for creativity.

Recently, I've encountered a number of groups trying to create some kind of civic center to Los Angeles. One of the more compelling is the City Works Campaign, an effort, as they say on their site, to "improve cities and spur innovation by mobilizing creative people to find varied solutions for urban problems." Part of their platform is LA Here and Now, a solutions-based workshop in collaboration with USC's Annenberg Innovation Lab.

I had the pleasure of attending their workshop this past weekend, which aimed to gather the creative, civic set of Los Angeles in exploring five themes: improving city experiences, fostering local economies, volunteering and (re)connecting, re-skilling and education, healthy and happy cities, and creating greater access to city services.

This weekend's workshop, A Smart Cities Incubator, broke up into groups by geographical region, recognizing that Los Angeles is more of a patchwork of communities with distinct needs, rather than a single, urban entity whose challenges can be tackled with broad policy changes. In our groups, we discussed the five themes and proposed to focus on one, and in the course of a couple hours then narrowed down that theme into a more actionable issue.When all the groups reconvened—East, North, South and West—a remarkable but not surprising theme emerged from almost all of us: how to address public transportation. Sprawling over 468 square smiles, Los Angeles is legendary for its lack of accessible public transportation, and every resident knows it. Proposals included ways to improve the bus stop experience with community-focused needs, building a community on the bus through skillsharing with fellow passengers (aided by social networks), and a social network for active transportation events, whether that be carpooling, biking, or simply sharing a subway ride together.

After a group vote, we decided to focus on ways to improve and reinvent the bus stop—a solution for a city whose bus network is actually vast and interconnected, but whose bus stops rarely contain more than few benches, if they have any benches at all. It was a great, open discussion about the woes of public transportation in Los Angeles, and a way to unite a lot of people passionate about this issue, from at least one high school student to the USC research community to designers and writers.

"We noticed in our cities there were people doing smart cities workshops or city innovations lab, and in Los Angeles there weren't as many opportunities for those kinds of city gatherings," noted Max Kanter, one of the group's organizers. "LA has a huge amount of people who have amazing skills that fit into this kind of community, it's just hard to get them all together into one location."

The discussion is purposeful. The next City Works Campaign event, to be announced on their website, will be focused on building a business model for the bus stop idea we discussed. And, importantly, it will bring more thinkers together.

The group's hopes, according to Kanter, is to get people passionate about the city into one room, so we can share ideas about improving the experience of living here and ultimately work to bring those ideas into fruition: "So the city will know and the community will know that there are these people will all these different skills. It's just about bringing them together."