Rana 2: Visions of an Electric Motorcycle Future from frog

Last week, Michael DiTullo's took a look back at the frog FZ750 Rana which recently entered the collection of the SFMOMA. Inspired by the original Rana, a small group of folks in frog's San Francisco and New York offices have been tinkiering with a new bike. One that incorporates the kinds of technologies that designers and consumers expect today. Here's a look at where the project currently stands—there are two concepts with some differences between the San Francisco studio's bike and New York's version. The SF version has projected augmented reality and swappable batteries and seems a bit more practical. NYC's bike reaches more—it lacks a combustion engine and has no battery. What are your thoughts on frog's vision for an electric future?

San Francisco bike started with an electric powertrain. Three removable nanoparticle crystalline copper hexacyanoferrate battery packs are mounted in the sculpted frame. The cylinder are removable with a quarter turn of the handle so they can be swapped out on the road on long rides. These batteries power a large exposed hub motor that occupies the entire center of the rear wheel.

A smartphone mount is integrated into the bike's triple clamp. The smartphone processor is used as the brain for a series of on road projected augmented reality graphics. To the rear of the bike are projected lane guides that help motorists on the road understand how far away from motorcyclist they should be. All instrumentation is projected toward the front of the bike onto the road surface. The illustration shows the maximum of what could be projected. In reality we would see many of these widgets appearing in a just-in-time fashion.

Above: Renderings of the Rana 2 San Francisco studio concept 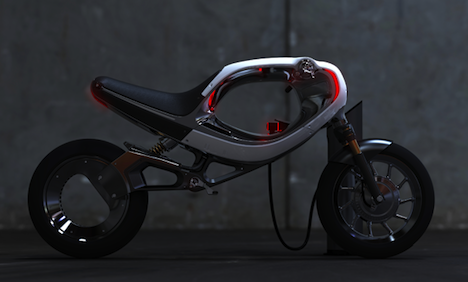 The approach of the

New York City studio's bike was more about simplification. "The fossil fuel powered motorcycles we know today are composed of many complex systems: a combustion motor alone includes an engine block, intake valves, valve covers, pistons, connecting rods, spark plugs and more. Performance-perfect assembly of these many components is a painstaking process, and requires a rigorous schedule of maintenance. Electric drive systems are changing all this, and are redefining the industry and motorcycle culture as a whole," explains design Jin Seok Hwang. "By eliminating the combustion engine, we lose mechanical complexity. The bike becomes less complicated, and the design can become more expressive." 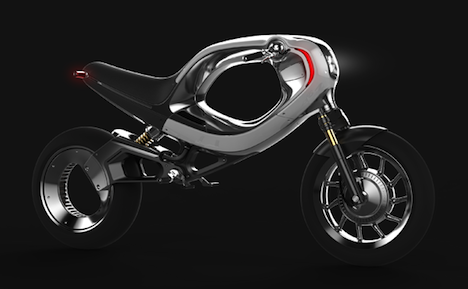 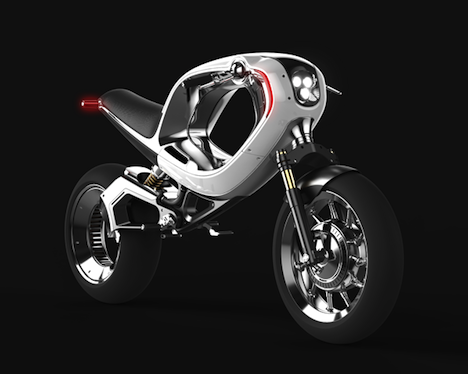 The overriding expression I aimed to capture is the resulting visual impact of the electric motor replacing the traditional combustion engine and its related systems. The large mass of the combustion engine, formerly a defining feature of a motorcycles profile, is now a symbolic void. The new electric motor's copper coils moved inside a hubless rear wheel, at once streamlining the motorcycles composition and providing for a highly efficient and direct transmission of power. I was very conscious about retaining the emotional impact of the iconic motorcycle silhouette however, and as such repurposed the bulky volume formerly known as the gas tank. It has become an ergonomic affordance for the rider, a support underneath and in front of the rider hugging his or her bike at great speeds. This design element provides a continuous formal transition from the back of the seat to the front of the instrument cluster and down around the void, transforming into the new location for the bikes fuel: the batteries. The entire bottom chassis is dedicated to storing battery cells. This location lowers the bikes center of gravity, creating an extremely stable ride. Because the motorcycle's speed is controlled directly by the power to the electric motor, virtually all other major mechanical components of a traditional motorcycle are no longer required. Fly-by-wire steering, full OLED digital instrument panel, full time connection to the cloud, and a helmet with heads-up display and retina tracking complete the trip into concept territory. Let's ride! 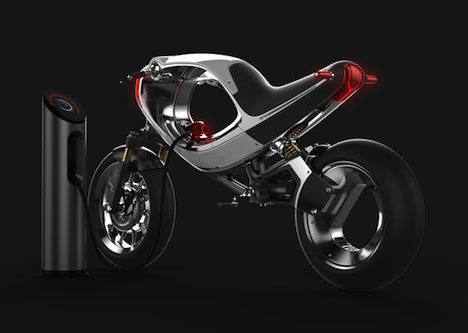 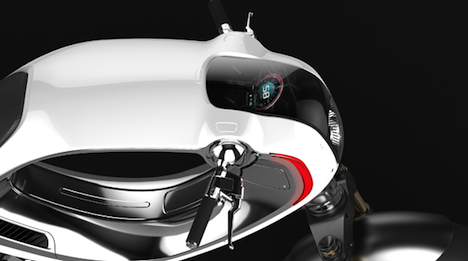 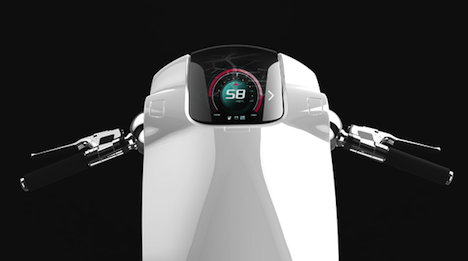 Rana 2: Visions of an Electric Motorcycle Future from frog