Graeme Obree: The Man, the Machine, the Mania 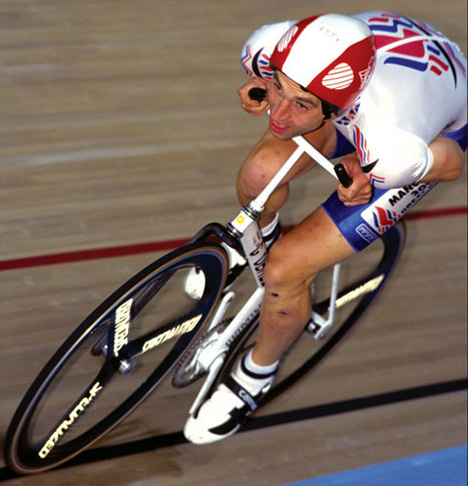 Graeme Obree in 1993, via Wolfgang Menn

It's the stuff of legend in the cycling community, and frankly it's a shame that he lacks recognition in the greater world of sport or of design: Graeme Obree, a.k.a. the "Flying Scotsman," the outsider who broke the World Hour Record (distance cycled in one hour) on a homemade bicycle in 1994, has set his sights on a new record. His infamous "Old Faithful" was inspired by the downhill skiing, where the athlete folded in an aerodynamic albeit awkward-looking tucked position; his equipment consisted of a radical design that reduced the traditional diamond into a single oversized tube, with a one-bladed fork and custom bottom bracket that infamously incorporated parts from a washing machine (more on that below).

A quick dip in the ol' YouTubes yields several fascinating documentary clips, but before we dive—headfirst, arms tucked, as it were—into the archive, it's worth checking out the occasion for Obree's recent headlines: earlier this month, Humans Invent published an engrossing interview with Obree, now 46, who currently has his eyes on the human-powered landspeed record.

Obree grows a bit incoherent during the second half of the five-minute clip, but this is precisely why he's such a compelling individual: he so obviously has a one-track mind that one gets the sense that his fixation on speed is his literally his raison d'etre. The lengthy interview (produced alongside the video) quickly exposes the depth of his obsession:...I thought to myself, what was my passion before? What were my strengths? I thought bike design, bike building, and pumping out a lot of energy from my legs. I thought the human powered land speed record is the perfect solution to all those three things. It is actually the complete embodiment of what I am as a human being. 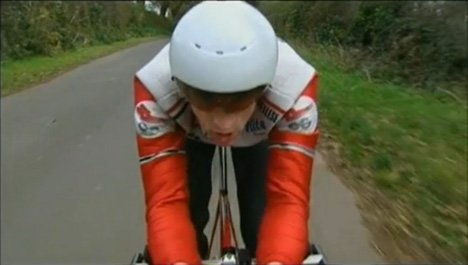 Now for the backstory: first up, a clip that glosses the athlete's biography, featuring the priceless line by Obree, speaking of his wife Anne, who bought a bike from his shop on a payment plan so she'd have an excuse to see him regularly: "I didn't know she fancied me. I thought she was poor."

Another doc from (as best I can determine) the mid-90's offers a closer look at his prime racing years in eight segments. Part 1 sets the stage, but Part 2 (above) is where it gets interesting: to turn the cliché on its head, it is like rocket science, at least to the extent that Obree is singularly concerned with aerodynamics and sustained propulsion. It is during Part 2 that Obree reveals that his design is "part bicycle, part washing machine"; subsequent parts depict a bit of David-vs-Goliath narrative between Obree and rival Chris Boardman. 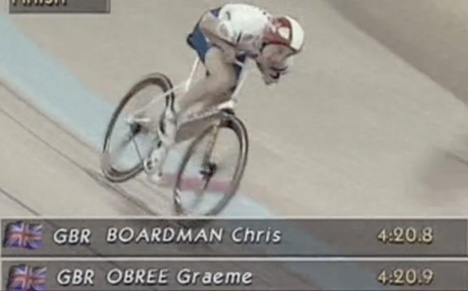 Those of you who mentioned the UCI in the comments to hipstomp's post about Shinichi Konno's curvy frames themselves probably already know that the original "Old Faithful" design—itself an obvious reference point for Konno, among others—was later banned by the organization, which may be another reason why Obree believes he's found his calling in the human-powered speed record. "No rules and regulations, and it is about pure speed and how fast a human can go—it doesn't get more exciting than that for me. Flying up a road at 85 MPH! I thought, oh yeah, I am going for that." (Given his singular obsession, we have to assume that Obree is also aware of Jeff Tiedeken's "Gravity Bike".) 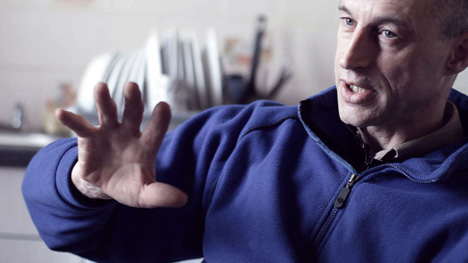 Indeed, the Humans Invent interview is chock full of choice quotes from Obree, especially regarding his design philosophy, which consists of "maximizing my possibilities within the constraints that I have." He may work from his kitchen in Saltcoats, Scotland, but Obree, channeling Dieter Rams, prescribes the opposite of the everything-but-the-kitchen-sink approach: "The less machine there is the better." 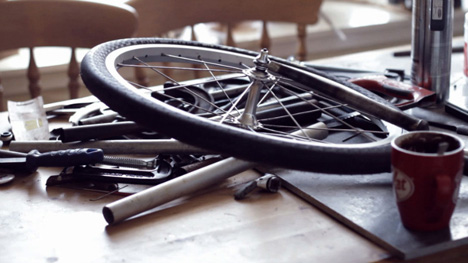 The publication promises a second video in due time; in the meantime, I wonder if it's worth tracking down The Flying Scotsman... the film, if not the individual.

Graeme Obree: The Man, the Machine, the Mania