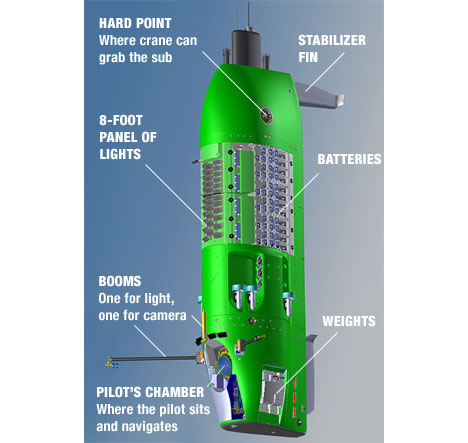 James Cameron has, as it's called in Hollywood, "F.U. money." Enough money to buy sports teams or superyachts or spend the rest of his days on a private island. But the Avatar director has eschewed the idle-rich lifestyle to fund and participate in exploration.

Cameron helped design the Deepsea Challenger craft, a one-man, 24-ton submersible that he himself piloted to the very bottom of the ocean last Sunday. "...The idea is that if you can go to the deepest spot in the ocean, you can go anywhere in the ocean," Cameron told NPR. "There are so many of these extremely deep places that, together, form the last unexplored frontier on our planet."

While the novel craft is stored in a horizontal position before deployment, once in the water it goes vertical, like a seahorse. Here's some pre-dive video featuring Cameron discussing the mission and the craft:

For six hours plus, Cameron's six-foot-two frame was bolted inside a tiny spherical cockpit, designed and developed by Australian ID firm Design + Industry, with Cameron's input.

Nathan Burke, D+I Project Manager, headed up the high profile project for D+I. "Numerous technical challenges were overcome by using lightweight hi tech materials to configure and house the extensive equipment James Cameron needed during his dive - including some space for a banana and muesli bar" he adds.

Working with Ron Allum's team of the Acheron Project, Design + Industry designed, developed and built many mock ups and prototypes to simulate the cockpit layout. Working directly with James Cameron the cockpit layout was optimized within the restricted space for maximum safety, minimal weight, relative comfort and ease of use for the limited time the submarine had when at the base of the Mariana Trench. The extreme pressures meant the entire cockpit design had to shrink when he reached the tremendous depths and expand during accent. The Australian designers engineered the solution using leading edge materials and design tools to deal with the technical challenges that were presented, including complete fire proofing, condensation management and complex control assemblies. Using highly skilled Australian manufacturers the final version was produced in record time to achieve the success we have seen this week.

As for why Cameron has involved himself in such a massive undertaking, and gone so far as to pilot the craft himself, a TED Talk he gave on the topic two years ago will shed some light: