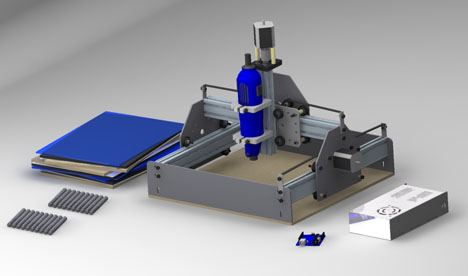 Looks like the Makerbot's finally got some company, if not direct competition: Inventables is now taking pre-orders for their own desktop fabrication machine, though this one is subtractive rather than additive. Called the ShapeOko, it's a DIY, open-source CNC milling machine that rings in at $999 for a complete machine (some assembly required). For now it's being sold sort of Kickstarter-style—Inventables needs 150 pre-orders to start the manufacturing run by a predetermined deadline or everyone's money gets refunded.

The ShapeOko can mill metal, plastic or wood, with a working area of nearly 8" by 8" in the X/Y axes and 3.5" in the Z. Here's designer Edward Ford introducing the machine:

Here's the machine in action:

Looks like you're gonna have to vacuum that bad boy off between uses.

For those who've never used a milling machine before and are scared to death of high-speed spindles, you can cut your teeth without cutting any material: The machine can be loaded with a Sharpie, so you can draw on cardstock until you work up the nerve.

At press time there were 103 orders placed with 19 days left in the deadline, so it's looking like a sure bet. And tinkerers willing to provide their own electronics can spend a lot less, with a mechanical-parts-only kit going for just $199. Learn more here.