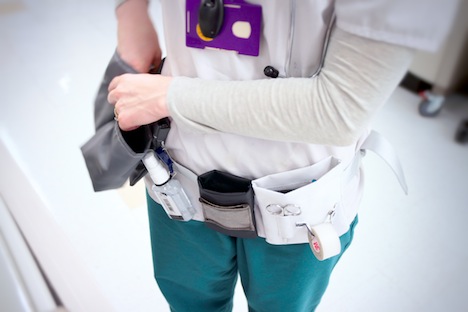 A modular toolbelt cut down on the Nurses need to practice hand hygiene by making her tools more accessible but it nevertheless made her movement more restricted. Images and Article by Rachel Lehrer

The best part of any design process is seeing your ideas touch the real world. Prototypes bring queries and hypothesis to life. They show things that in retrospect seem obvious but in prospect are entirely unexpected. After 7 months spent researching hand hygiene compliance in a hospital, I was finally able to walk through the rotating doors and unveil a design under the expectant gaze of the nurse who was going to experience it all day.

My past life as a dancer has made my design process movement-driven. In health care, this translates to a focus on understanding the physical roadblocks to peak performance. I'm a physical therapist for environments; our bodies are our inescapable collaborators. Through enactments, observing the subtle nuances of movement and through physically knowing the process of "hardwiring" movement rituals, I've been able to look at physical behaviors and spatial intention from the strategic vantage point of the body.

In my previous article on hand hygiene, I established a series of movement lenses for increasing hand hygiene compliance in a hospital—movement scripts, muscle memory, environmental ergonomics. Now the resulting hypotheses have been tested. Each intervention utilizes my movement driven perspective but also challenges the institutional reliance on quantitative proof and bottom-line driven decisions that make experimenting and designing in a hospital almost ironic. In a place that relies on proven discrete solutions, the messiness, questioning and experimentation of a design process must win its right to be there. It's an understatement to say that a design practice—always questioning the real culprit, always probing, always wondering if there might be a better way—makes the hospital status quo nervous.

You can't change someone's behavior before you understand it and so I began my research phase by observing the nurses, whose behavior I hoped to change, and the Infection Prevention and Control staff, who wanted me to change the behavior. At a well-attended meeting with leaders from multiple departments, I presented a provocation. I wanted those who control the dialogue and data around hand hygiene to feel what consistent hand hygiene compliance was like.

For 4 hours on a cold day, the Infection Prevention and Control staff practiced hand hygiene every 6 minutes and hated every second of it. Nurses, though, have to practice hand hygiene, on average, every 6 minutes for their entire 12 hour shifts. I was looking to increase empathy, to get the rule makers to understand what following the rules feels like. The value of this type of intervention is not in increasing compliance numbers or in spurring the drafting of a new mission statement but in re-inscribing the problem on the stressed bodies of those that oversee compliance. In a bottom line driven atmosphere, it is important to remind those at desks that hundreds of unique human factors are involved in increasing compliance. It is a complex problem that can't be resolved by adding more signs that simply restate the goal in bigger type. Before the hospital gets clean hands, it must get its own dirty (and dry and itchy) too.Surprisingly, this simple but starkly different approach and provocation earned me allies in the meeting. Immediately following my presentation an argument erupted between a microbiologist and an Infection Prevention and Control Practitioner that perfectly illustrated the divergent views on increasing hand hygiene—"It's easy, if you are disciplined" vs. "No, it's always a struggle, even for the most committed." When you have experienced the challenges of practicing hand hygiene consistently then the conventional narrative is upended and the forgetfulness and laziness of nurses ceases to be cited as the main roadblock to high compliance rates. Word of my empathizing project spread and I was connected with educators and practitioners who saw my struggle with the medical status quo as something that their clinical staff could benefit from.

My earliest intervention focused on the spatial and psychological appeal of dispensers. I monitored the usage of 5 wall-mounted dispensers in a hallway and placed signs that identified them as the least used (5th place) versus most used (1st place) dispenser. Healthcare workers who used the dispensers were rewarded by seeing the number on their nearest dispenser improve. During one morning of testing, the dispensers were used 250% more than on a day without this kind of feedback. Though this intervention was designed to create quantitative data that directly demonstrated improvements to the hospital's bottom line, it also provided nurse managers and myself with important information on which dispensers, in which spatial location were most useful. In newer units, the tendency is to over-saturate an environment with dispensers and this intervention made it exceptionally clear which dispensers were going unused. If this type of spatial feedback is a solution, then a first step might require building services to keep track of how often they refill the dispensers, and then eliminate and reconfigure them as necessary. 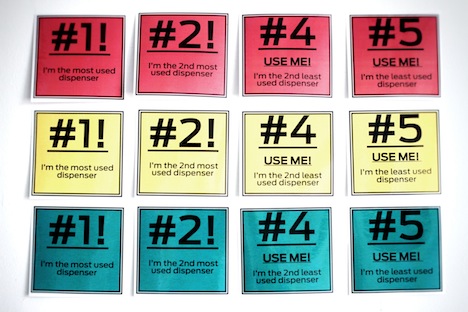 Real-time feedback on dispensers increased usage an average of 250% and let us know which dispenser locations were most appealing to hospital staff.

My next intervention was a toolbelt for nurses, designed with Ross Leonardy. The idea emerged from seeing nurses in older centralized units consistently walking into patients' rooms with their hands full. We worked to create a belt with modular units and silver-impregnated antimicrobial pockets sized specifically for the most commonly needed tools; and we chose materials that withstand the same bleach wipes used on shared medical equipment.

During the initial trial, I observed Nurse Erin while she discharged patients, delivered pills and of course kept her hands clean in the Neurosurgery ICU. I watched the unexpected failings and the minor successes emerge continuously through the hours of her shift. I saw how one of the belt's cumbersome pockets, which drastically cut down on her need for trips to the supply closet between patients, nevertheless made her movement more restricted. She carried less in her hands, traveled less to retrieve supplies and now had an individual hand sanitizer strapped to her belt; but while all of these things made the hand sanitizing that the hospital requires her to do more possible, it did not ensure compliance—and added new constraints to her workflow. The intervention made the divergent approaches and goals of the hospital and myself manifest. The next iteration, with the help of Ross' fashion expertise, will need to bridge this.

Another intervention, in a high traffic rehab unit, reappropriated the visual tools of physical therapy to bring attention to hand sanitizing dispensers that were partially obscured. I placed scrub-colored footprints and various other visual cues around the dispensers. Communicating on a different plane (than signs on walls) in a familiar visual language, these cues provided subtle pulls into the dispenser's sphere, attracted new visitors to use the dispenser and served as an introduction to the unique culture of the rehabilitative space. Again, the differing approach and goals between myself and the hospital became clear. The footprints quickly faded from prominence for the unit staff, whose compliance the hospital does monitor; but they received significant attention from visitors travelling through the unfamiliar halls, whose compliance the hospital does not monitor. My intervention targeted a population entirely out of the hospitals view. 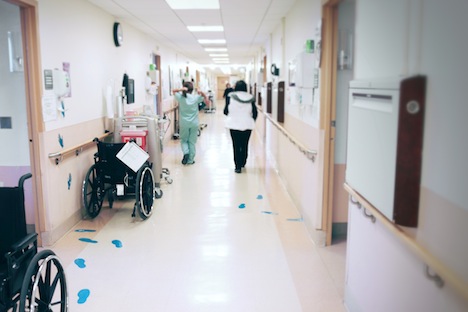 Placing footprints beneath partially obscured hand sanitizing dispensers targeted many of the visitors traveling through the unfamiliar hallway.

In the Medical Center's drive for a solution, they have been blinded to the disparate components of the problem. The solution is not a single process or product or able to be purchased with one lump sum but lies in reconfiguring people, spaces, objects and expectations all together, over the course of many years. The treatment is not a magic pill but a series of small gifts. Each one can incrementally improve the likelihood of compliance, but only if encouraged by a service institution that understands the long term effectiveness of slight, diverse, persistent nudges. Having won the right to be within the hospital's attempts to improve hand hygiene rates, but as an outsider, free from the demand for defined and measurable outcomes, I have been able to travel through the hospital collecting all the non-quantifiable factors that nevertheless affect hand hygiene rates: a nurse's personal habits, the unit's spatial layout, its speciality and leadership, etc. all affect the disease of non-compliance and each needs to be taken into consideration when formulating a plan of action. As with most longstanding problems, if a singular solution existed then we would have solved it already.

Moving forward, I'm working with my closest hospital allies to make some of my interventions permanent and I'll be continuing to work with a number of nurses to make pockets that don't restrict movement and are customized for their particular unit and workflow. I'll also be presenting my recommendations of best practices to the administration. I'll let them know, for example, how dispensers need to be placed immediately outside of each and every patient's doorway to connect the behavior to a consistent transitional space and how the nurse managers with the most compliant staff empower them to confront non-compliance with humorous reminders rather than shame. Physicians formulate treatment plans based on a comprehensive understanding of the patient and not just based on a singular diagnosis or ailment. Though the design and medical processes might diverge at critical junctures, they both come to the same conclusion—that when fighting big complex problems a scalpel, rather than an axe is best.