Mocubo Cutting Board Borrows an Idea from Industrial Kitchens 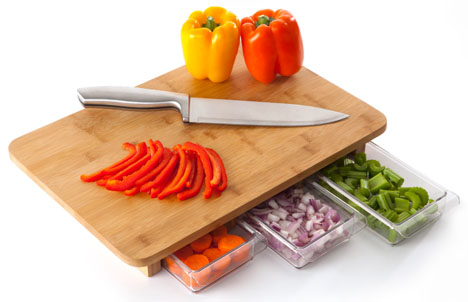 Before entering design school I worked as a prep chef. I learned to sharpen knives and observe some industrial-speed kitchen designs. One of my jobs was to transform neverending containers of vegetables into bite-sized pieces--quickly. (I can still hear head chef Rich yelling at me to pick up the pace.) The design system in place for this--designed both for speed and for right-handed people—was as follows:

I worked at a stainless steel table that had a rectangular cutout on the right side of the top surface. Into this cutout was dropped a rectangular plastic bin with a lip around its perimeter that prevented it from falling through; the top of the bin was roughly level with the worksurface. To the left of this, in the center of the table, was a two-inch-thick cutting board. Its thickness brought its top surface slightly higher than the bin, an important detail. To the left of the cutting board was the target container of vegetables. I cannot stress how quickly these operations were performed; from behind I probably looked like I was playing the piano. My left hand grabbed the mushrooms or zucchini or whatever out of the box and placed them on the cutting board. My right hand, holding the knife, quickly whacked what was being cut into slices. You'd then flick the knife over, holding it backwards so the blade pointed up and the dull side was down, and use the dull side to quickly drag across the cutting board from left to right, sweeping all of your cuttings into the bin. Rinse and repeat. Bins and vegetable containers were swapped in and out as needed.

I haven't been in a restaurant kitchen in a while, but back then this was undoubtedly the most efficient way to get through huge piles of vegetables. I was reminded of this by seeing Quirky's Mocubo Cutting Board pictured up top, which has a similar system of a high cutting board and lower containers that the cuttings can be swept into.

When not being "swept" into, the containers nest on the underside of the cutting board for storage. 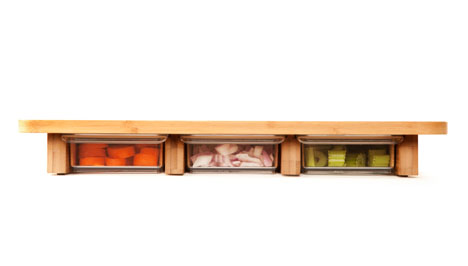 They only got one detail wrong, as seen in the photo below: The model is sweeping the cuttings with the blade side down. 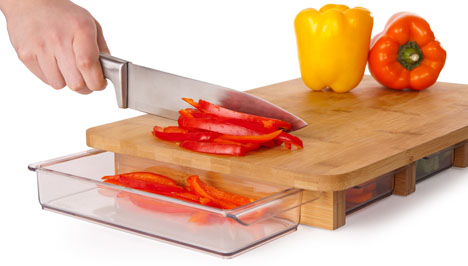 That's an amateur move that guarantees you'll have to break your flow by stopping to sharpen the knife too often. Rich would not be pleased. And you didn't want to piss Rich off, because he made the staff meals and had a memory like a goddamn elephant.

Mocubo Cutting Board Borrows an Idea from Industrial Kitchens