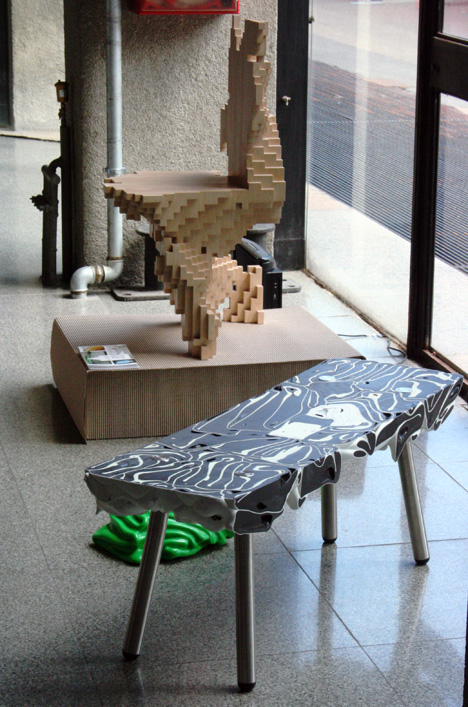 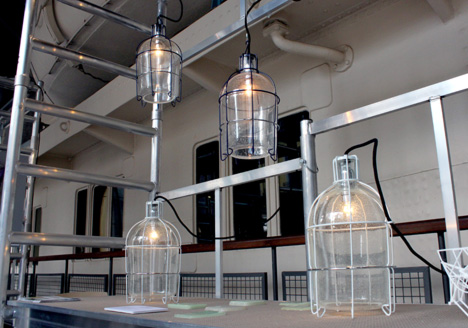 Amsterdam's Transnatural is a multidisciplinary organization that offers, among other things, a selection of well-curated design objects "in which nature & technology come together in unison without damaging the planet." (They also host public programming and workshops, mostly in the space "between nature and technology with a combination of art, (speculative, future) design, and emerging technology.") 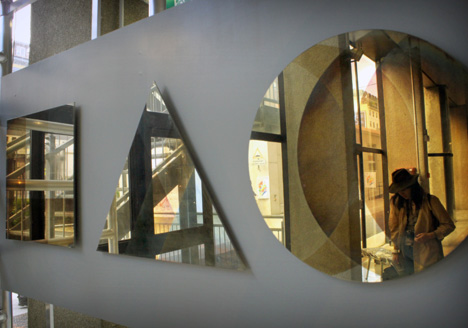 Their group exhibition at the Salone occupied the very first space following the all-but-immersive maze of the MOST's headliner (and 'instigator,' per the press language), an installation by Tom Dixon himself. A series of mirrors by Lex Pott & David Derksen ostensibly echoes ('mirrors,' perhaps) Dixon's aesthetic, though the "Transcience Mirror" is more properly construed as an illustration of degradation over time, where the designers have accelerated the oxidation process with sulfur. Following their initial material exploration, Pott & Derksen have quantized the patina into geometric shapes in the finished products (above). 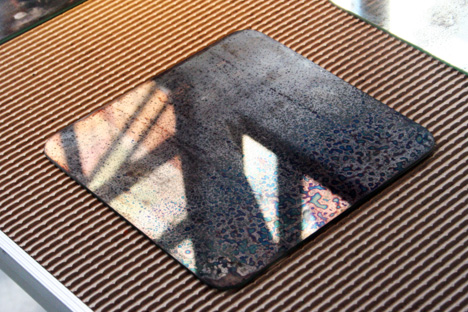 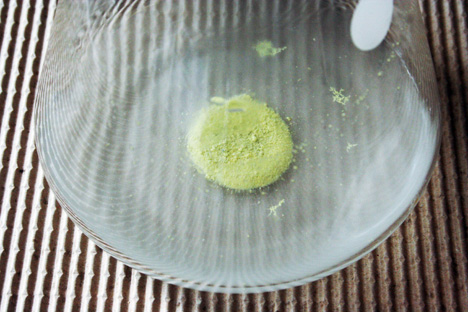 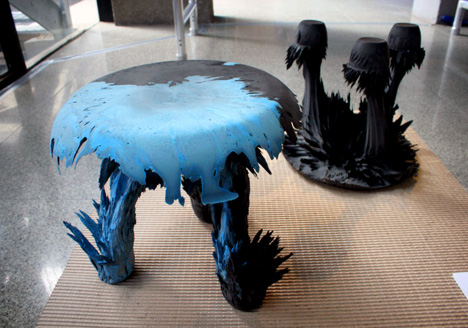 The mirrors are adjacent to Jólan van der Wiel's "Gravity Stools," which are produced from a homogenous mixture of iron fillings and a plastic compound that cures in half an hour once he has extracted the material from the mold. 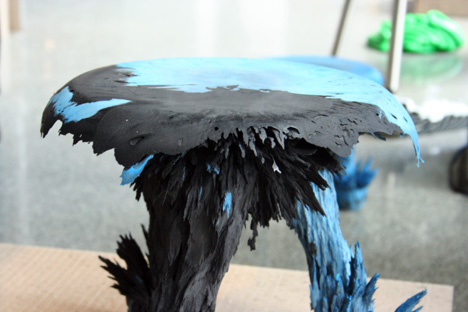 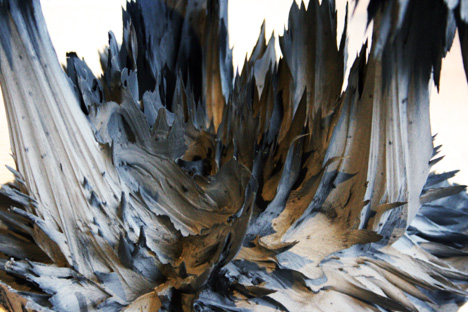 We'll have more on him from his exhibit at Ventura Lambrate shortly, but the original production video (after the jump) is well worth watching: 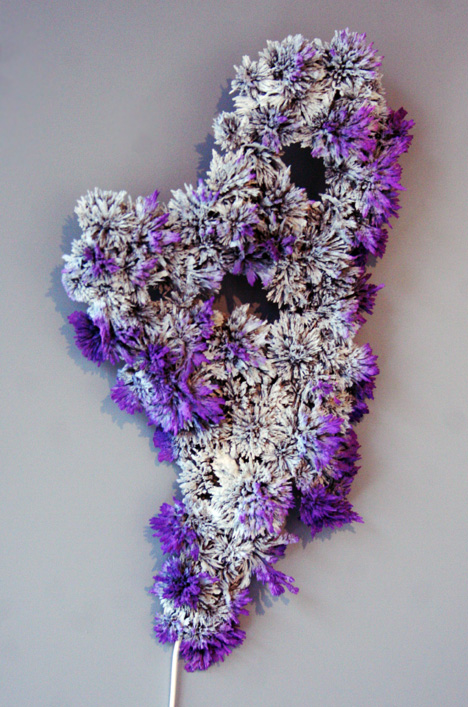 Fellow Netherlands-based designer Tim van Cromvoirt had a similar piece to show: "Thermophores" is an "artificial wall organism" that changes colors based on its temperature (controlled largely by the light bulb within). The piece itself is made from a homogenous mixture of glue, iron fillings and pigment, which give it structure, form and hue, respectively. See it in action here. 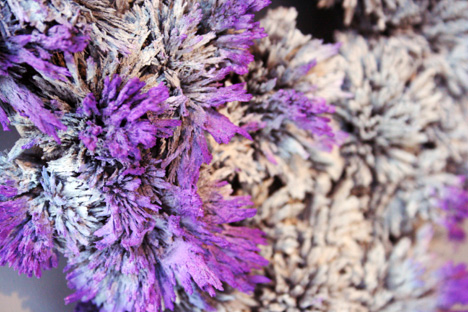 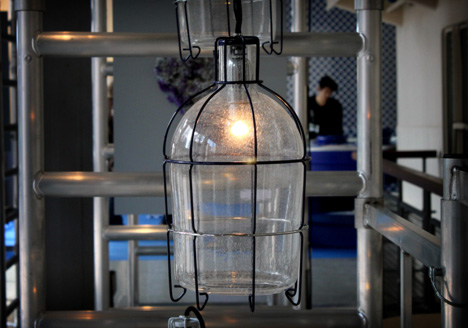 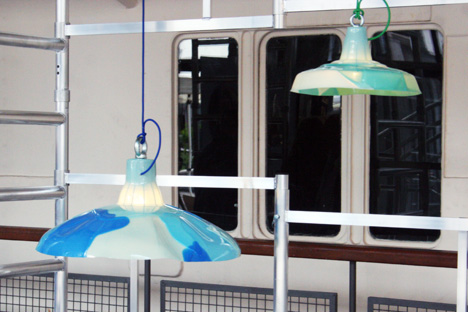 Work by Mike Thompson and Gionata Gatto also undergoes a sort of metamorphosis based on its materials. The pair followed up on last year's well-received "Trap Light" with the new "Trace Light," a very different take on photoluminescence. Whereas these pigments—flecks on the inside of the "Trap Light"—are mixed into a polyurethane rubber compound and cured in the form of medium-to-massive umbrella-like lampshades. 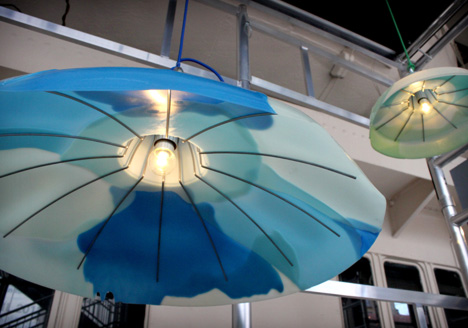 Mike mentioned that the form for the mold of the large one at Spazio Rossana Orlandi (not pictured) came from an industrial cylinder; check out the process below: 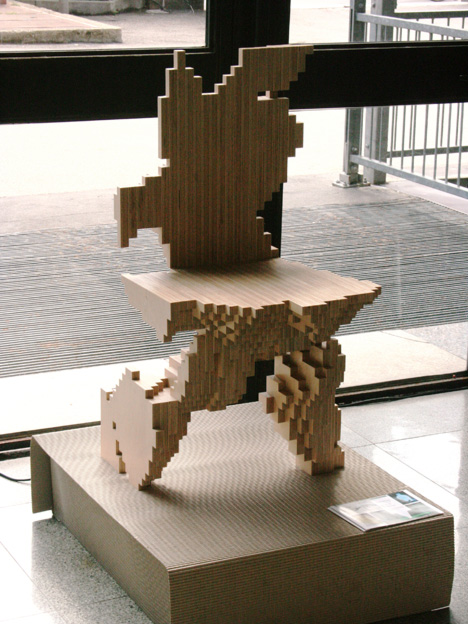 The "Computational Chair" is perhaps best explained by the EZCT Architecture & Design Research themselves:The Computational Chair has evolved by application of genetic algorithms. One of the project aims is to achieve a mechanization of the design process, such that instances of the concept can be produced fully automated. This notion is indispensable to fully explore the potential of a non-serial fabrication of objects.

The project comprises 25 chairs, each an instance of the same simple design concept; to evolve a chair that minimizes its volume while able to dissolve the forces that act upon it. By coupling simulation and evolution, EZCT has been able to evolve this design by completely eliminating any assumptions and abstractions, while having evolution manage complexity. Founder of "De Stijl" Theo van Doesburg stated that he was interested in "the mere consequences of a simple idea." Surely EZCT has taken this notion to the next level. 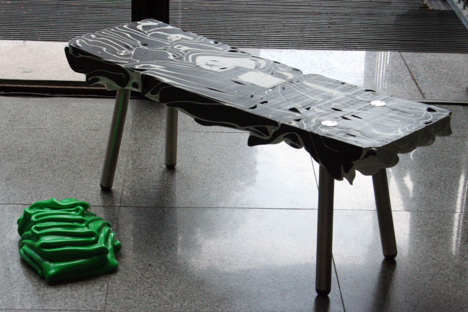 Ruben Thier's Organic Benches and Stools are made from excess polyethylene expelled from manufacturing, such that "the liquid plastic overproduction that is dripping down from the machine is directly collected in molds." 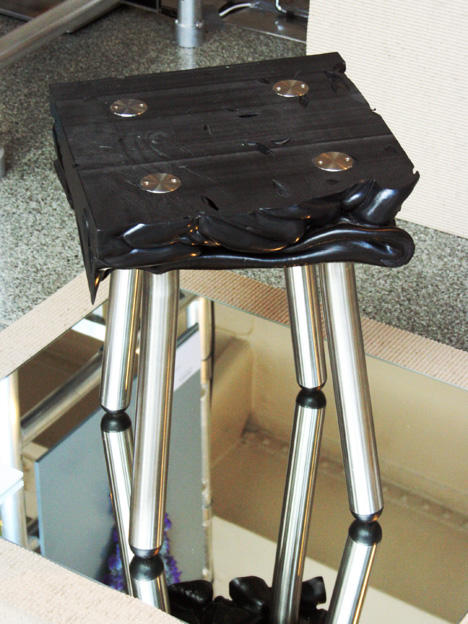