Luggage Review Preamble: How I Travel 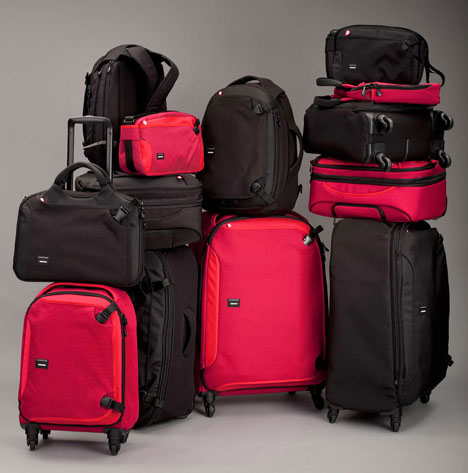 Air travel is a wondrous miracle that's led to experiences I'll treasure forever. It's because of the Wright Brothers that I've been able to bask in a Hawaiian sunrise, travel by dog sled through a neverending Arctic sunset, quaff Scotch in the Highlands, down mojitos in Havana. The list of things all of us are able to see, experience and accomplish by getting on an airplane is incalculably valuable.

That being said, I still hate it.

Modern air travel's long list of minor annoyances adds up into one royal pain in the ass. What's most frustrating is that so many of the inconveniences are out of our control: Officious staffers, mechanical problems, overpriced sustenance, logistical inefficiencies that have you spending hours in the wrong location. To say nothing of the unpleasantness of today's overcrowded flights.

While traveling there's only a couple of things you can control: The luggage you select, and the things you put into that luggage. While those seemingly minor choices won't ensure your plane is on time, they can go a long way towards making you more comfortable.

We've got a Crumpler bag and luggage review coming up, and before getting to it and explaining the bags we opted to borrow, I need to explain how your reviewer typically travels. All of us have developed our own traveling methodologies, and my idiosyncratic needs will surely overlap with yours at points and diverge wildly at others.

How I Travel: Two Types of Bags, No Checked Luggage

Crumpler has an absolutely bewildering array of product that we'd need to narrow down to two or three bags. Which begs the question, how do you select what types of bags to travel with?

Whether traveling for business or pleasure, a short trip or long, if it involves a plane, a train and/or pavement I always travel with two specific types of bags: A laptop backpack and a rolling carry-on with two wheels rather than four. (I also carry a smaller third bag of my own design, a sort of day bag that folds up into one of the two other bags, but it will not be relevant to these reviews.)

I specifically use those two types because I have unexpectedly had to walk for extremely long stretches with luggage in tow, and these types are superior in those situations. Travel snafus in Vancouver, a language barrier in Beijing and an unfortunate transfer at Dallas-Fort Worth (how sprawling is that freaking airport?) had me walking literally miles while loaded down with everything I brought.

The backpack leaves both hands free and is more comfortable, straddling both shoulders, than a messenger bag for long hikes, particularly when the bag is full/heavy. The rolling carry-on is better than a duffle for the same reason, presupposing pavement or cobblestone rather than mud, and provides a measure of protective structure due to a design that needs to incorporate retractable handles without sagging while in motion. I avoid the four-wheeled rolling carry-on as having extra wheels is a liability on cobblestone; with two wheels you can manage rough pavement better.

I never use larger suitcases, as I never travel with checked luggage no matter the situation. Having witnessed firsthand the hassles of lost checked luggage and its potential to completely ruin a trip, I simply avoid it. For a one-week trip involving a wedding I'll stuff everything--including my suit and dress shoes--into a rolling carry-on, which is why it's important to select the right type.

Work Gear. Due to the necessity of doing work (even on vacations) I always have to carry a laptop, camera, audio recorder and the attendant chargers, cables, backup batteries and the like, and those things have immutable weights.

Personal Gear. Because I can't change the weight of my work gear, I keep my load light by carrying a minimum of clothes and almost no toiletries. That being said, I always carry clothes appropriate for the climate, I just don't carry a lot of fashionable changes. Monsoons in Vietnam, a bitter Beijing winter, and even San Francisco's unpredictable weather swings have all taught me the importance of certain types of clothing and footwear, particularly if you may unexpectedly have to spend a lot of time outdoors, as can happen when things go wrong.

Traveling Gear. These are objects to be used during the actual act of travel and the inevitable delays:

- An iPad, which has battery life far superior to a laptop, for those long-haul flights. Prior to a long flight mine is loaded up with books, magazines, movies and TV shows. I almost never use a laptop on flights, not since I read about a woman whose screen was destroyed mid-flight; she was using it on the pull-down tray when the man in front of her suddenly reclined his seat, trapping and shattering her screen by compressing it top-to-bottom.

- A print book. During particularly miserable seating arrangements (sandwiched between the crying baby and the coughing linebacker), when the plane is grounded and you're in that time window when the flight attendants are being martinettish about using electronic devices, I need something to keep me distracted.

- Noise-canceling headphones. A godsend, and these will get their own more detailed review.

- Food and water. Purchased last-minute, these don't need to go in your bag but can be stuffed in the seat pocket. However, these things do need to "interface" with the rolling carry-on, which I'll get to in the carry-on review.

- An inflatable travel pillow. I bought this at a store called Tokyu Hands in Japan, and it's perhaps the best travel item I've ever purchased. It takes up virtually no space in a bag since it stores flat. Before buying it, my travel sleep was constantly interrupted by my head lolling over and snapping me awake.

How the Goods are Divided

All of the personal gear, and the entirety of the work gear minus the laptop, goes into the rolling carry-on. Though I carry it on board, I always assume I may be separated from it during the flight; if I'm in a window seat I don't want to inconvenience the people sitting in E and D by getting up to access the overhead bin, and we've all seen flights where some poor sap has to check his carry-on because the bins are full.

All of the traveling gear stays in the backpack between my feet and has anything I'd need to access during the flight. It's important to choose this backpack with an eye towards balance: It must be big enough to hold all you'll need, yet small enough to fit under the seat in front of you while still affording you some legroom.

Up Next: Bag Selection and Review

Luggage Review Preamble: How I Travel