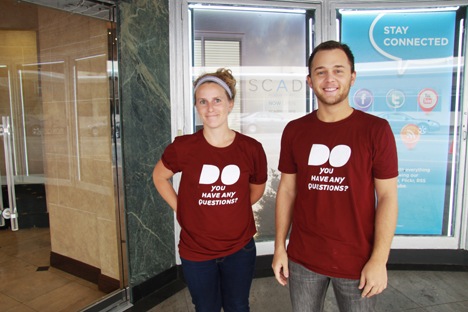 Two fantastic SCAD students greeting at the door in their Do-ference t-shirts.

Friday marked the second day of the Do-ference and the first day of the Ethos Conference, with panelists and workshops running simultaneously across the city of Savannah. Ezio Manzini, Italian design strategist, sustainability expert, and founder of DESIS (Design for Social Innovation towards Sustainability), started the day off right for both events with his morning keynote, which left the audience a little more educated about the history behind 'social innovation,' as well as some of the driving factors behind it. 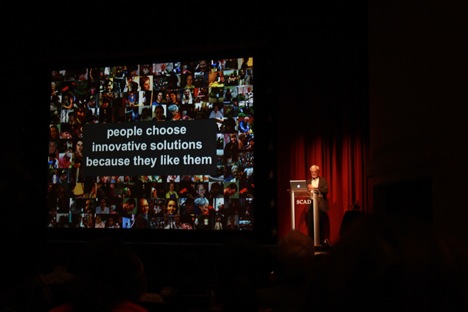 Manzini spoke about how designers had the power to create great social innovation through local, yet radical, change. Introducing the audience to a new, emerging world of "small projects to broad visions and vice versa," Manzini told the theatre of students, faculty, professionals, and DO-ers that the key issue and most powerful driver today is social innovation. Creatives, he said, hold the power to take the resources that exist and combine them in a new way. 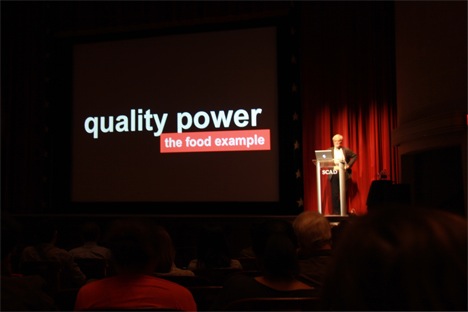 The Italian professor went on to discuss the importance of quality through all of this, particularly the "quality of the local-connected." A delicate balance, the idea of being both local and connected is a difficult struggle, as being local can mean to close oneself from the rest of the world. Manzini urged the crowd to be local and open—also known as "cosmopolitan local."Nowadays, there is a lot of people talking about design activists, kind of politicians, designers that participate through political action—doing something to help directly, political meaning, that could promote social innovation.

Delving into the issue of time, Manzini used a metaphor of great wine, compared to a can of Coca-Cola. "You cannot consume deep qualities fast." While Coke is quick to make and quick to drink, people tend to savor and appreciate a bottle of great wine. After all, "in slowness, you can consume complexities." 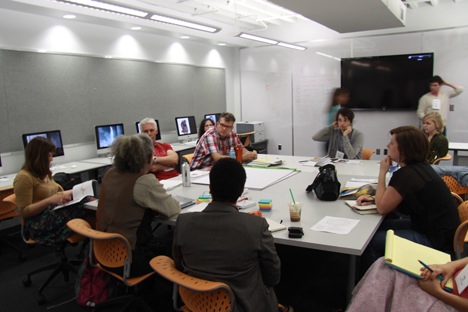 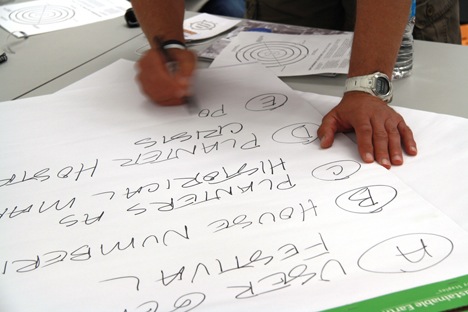 Following the keynote, I rejoined the Empowering Culture group in Adler Hall to see what concepts everyone had come up with since our meeting the day before at Meadowlark Studios. With John Bielenberg, founder of Project M, and Josh McManus, co-founder of Create Here, leading the group, "thinking wrong" was strongly encouraged and ideas, unlimited. Potential concepts—from staged hostage situations (with planters) to impromptu rap concerts—flew around the table as designers, students, policymakers, and Waters Avenue residents brainstormed ways to promote the culture of the area. 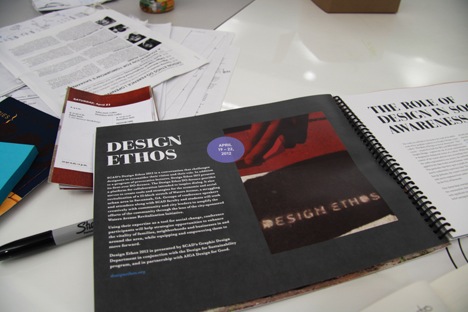 A publication created via the "Role of Design and Social Awareness" studio taught at SCAD, which focused on the Waters Avenue region. 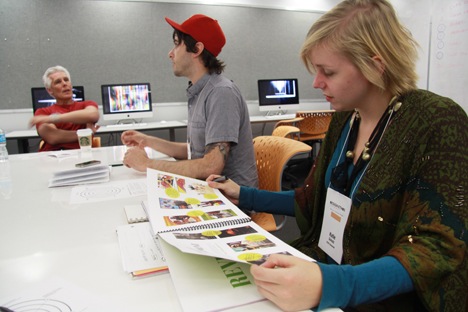 Drawing inspiration from Thursday's walking tour of Waters Avenue, many in the group were drawn to the Before I Die.. Wall (#bidsav) for its beauty as an installation, as well as community space for honest expression of the hopes and dreams of those who wrote on it. Looking to capture that sentiment, members of the Culture team considered ways to celebrate art, food, and music of the area while also encouraging ownership of the project in the community. 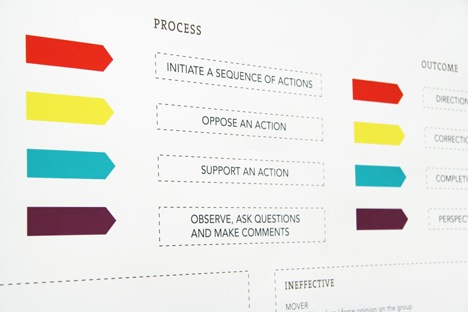 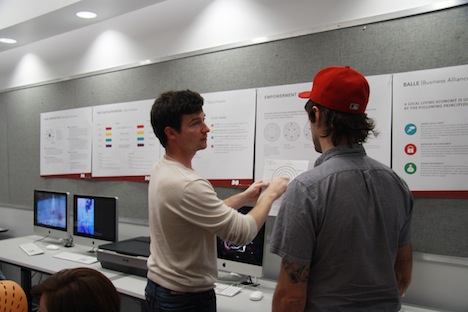 Nick Shroeder and Matthew Cole discussing some of the tools offered to the Do-ers for tackling their problems.

As I perused the other groups, from Places to Youth, I saw teams struggling with the similar issue of taking huge, powerful, pie-in-the-sky dream concepts and condensing them into a project that the Waters Avenue community would be able to implement and sustain long after the Do-ference participants were gone. With policymakers and local citizens in attendance, however, the students and designers had the infrastructure they needed in the room with them to help refine ideas into something that could be put into action. 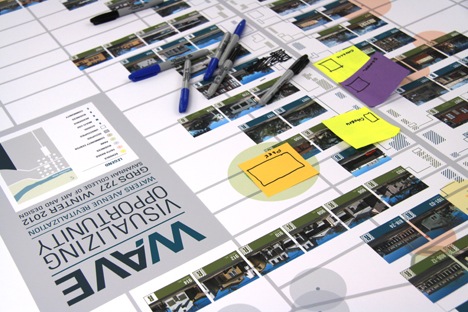 The Empowering Places Team laid out their work with a street map and visual of every building on Waters Avenue. 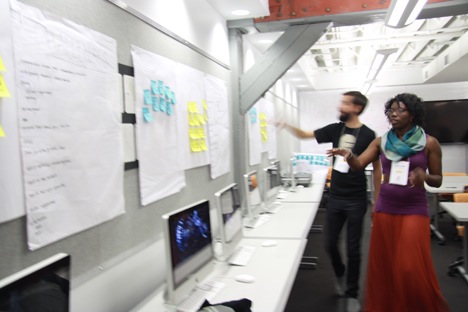 Marc O'Brien and Liz Ogbu of the Empowering Renewal Team mapping out the terrain for their project.

Larry "Gator" Rivers, living legend and former Globetrotter, was one of the Waters Avenue locals who came to take the Do-ference up to the next level while also sharing some extremely impressive basketball skills with some of the younger Do-ers. Having members of Waters Avenue in the room of each team provided an invaluable and necessary opportunity for the voice of the community to be heard alongside the discussion. Policymakers and city government employees also shared insights into the community, offering the instrumental perspective of how the city viewed the community and measured its success and status in comparison of other Savannah neighborhoods. 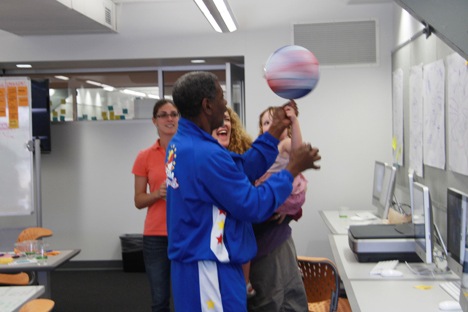 "Gator" Rivers showing one of the younger Do-ers how to spin a basketball on her finger.

Following lunch, Do-ers began to fall into post-food lulls as they attempted to hone in on one idea to create a plan for execution. Just as this began to happen, SCAD's very own circus made a surprise visit to Adler Hall, in an attempt to provide a distraction and reinvigorate the groups through stilts, juggling, belly-dancing, as well a loud accordion music. While it didn't quite have its intended effect, all of the groups unanimously shut their doors and buckled down to create solutions for Waters Avenue. 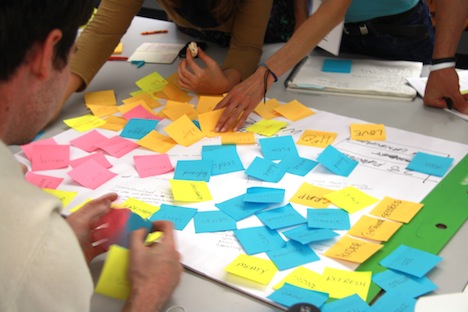 By six o'clock, Do-ers had their list of tasks to accomplish before presentations Saturday, and a strong focus on what they envisioned for the Waters Avenue community. I spoke with Design Ethos founder Scott Boylston today on what he anticipated would be the 'final product' of the Do-ference. Boylston hopes to see a community of Do-ers grow beyond the conference, supporting each other as they go back into their own practices, as well as see design serve Waters Avenue through social innovation. 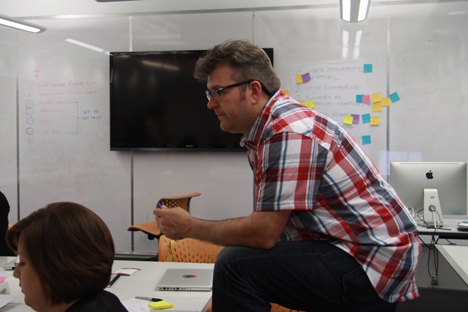 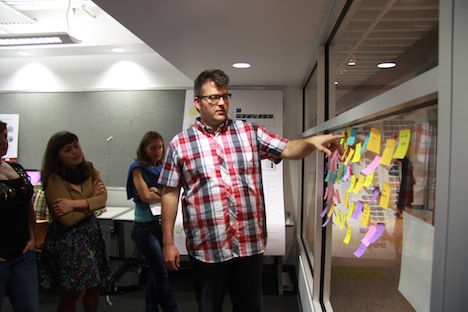 McManus helping narrow down names for our project. The winner? "400 lb Babies."

A film screening of "Urbanized" over at the SCAD Museum of Art closed both the Do-ference and the Ethos Conference for the day. Directed by Gary Hustwit, the film looks at various problems and strategies behind urban design, as well as showcases architects, city planners, policymakers, builders, and thinkers from around the world. 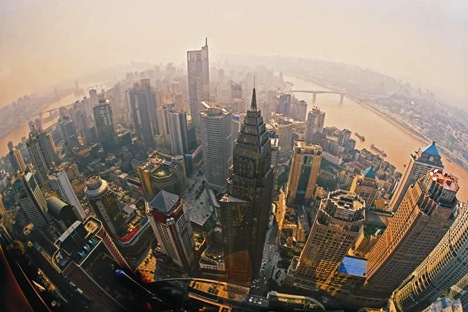 An overcrowded city from the film, Urbanized, from Gary Hustwit's website. 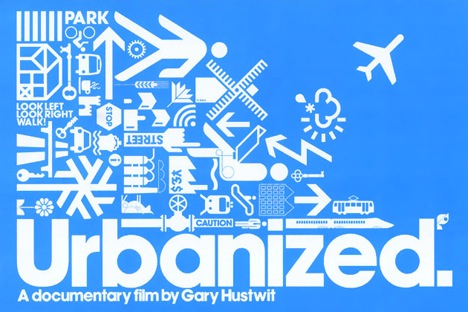 The final day of the Design Ethos Conference featured a full morning of panelists; both Do-ers and Ethos attendees will come together for final presentations on their efforts. We'll be wrapping up our Do-ference coverage with a recap of the final day of inspirational speakers, social innovation, and radical change tomorrow!