After two days of Do-ferencing, the third and final day of Design Ethos started bright and early at 8:00am, as several participants skipped the "coffee social" in lieu of dedicating more time to final presentations. "Do-ers" (aka participants of the Do-ference side of things) were scheduled to show their respective concepts for Waters Avenue to the rest of the conference at 4:30 that afternoon. The feeling of an impending deadline was universal, as designers, students, Waters Avenue residents rushed around the city of Savannah to finish on time. 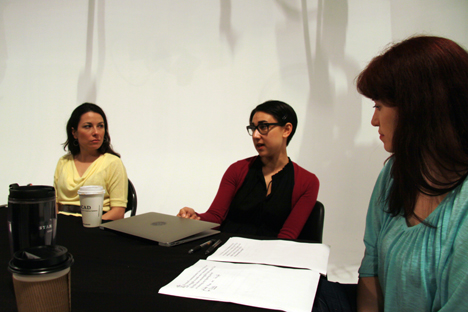 The student panel with constituents from Purdue, MICA, and SCAD.

I decided to desert Team Empowering Culture during their time of need, dropping off Rhino files to be laser-cut into a stork (see below) before heading to Hamilton Hall to check out some of the panelists. Panels ran concurrently, starting with Mark Randall and Ursula Tischner, which ran at the same time as a student panel. Randall talked about how to get social innovation projects up off the ground via building community, finding connections, and getting heard in order to get funded. Tischner focused primarily on sustainable design as a full-time job, urging the audience to "make sustainability attractive." 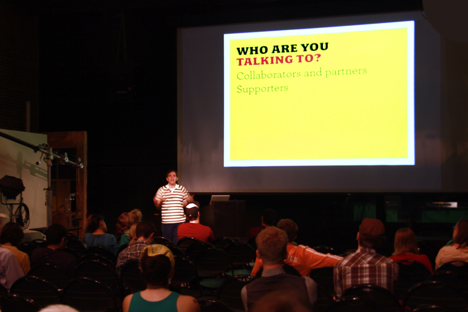 The concept of doing social innovation and making is fiscally viable was a theme seen throughout the day, as each panelist addressed how they funded their work enough to keep the lights on. , The topic of making a living as a designer working in the field social innovation was clearly on everyone's mind—it even came up in the student panel (which ended up being more of a student table discussion)—and was the topic of Noah Scalin's panel presentation. 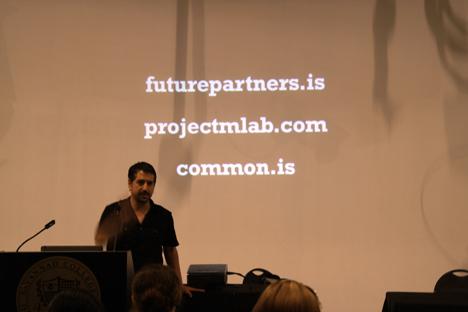 Noah Scalin on "Making A Living As A Socially Conscious Designer."

In fact, Scalin's talk was called precisely that—"Making a Living As a Socially Conscious Designer"—based on his own experience as founder of Another Limited Rebellion, relating how he built his studio practice up in 2001 when a "socially conscious design firm" was a laughable phrase to a successful example of good business. His latest book, The Design Activist's Handbook: How to Change the World (or at Least Your Part of It) with Socially Conscious Design, is available for pre-order. 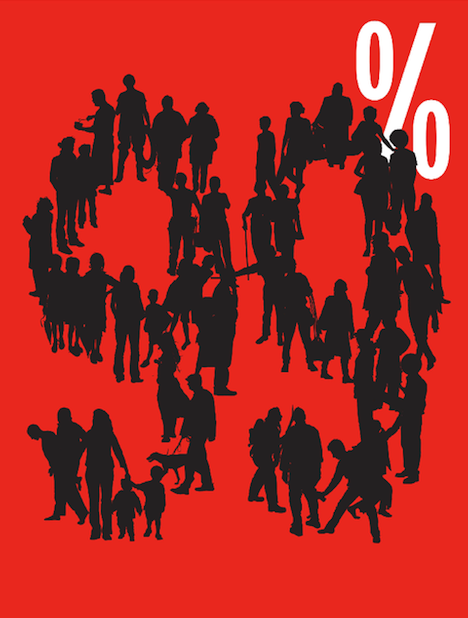 A [free] poster designed by Scalin for the 99% movement.

John Bielenberg gave four steps to "thinking wrong"—something he does via Project M. Aimed at creative individuals, Project M looks to create a platform for other do-gooders to collaborate and launch projects that make a positive impact. Initially Project M was a side project to his professional practice, but Bielenberg realized that it was the most fun and fulfilling thing he was doing and committed to doing it for full time.

1. Get Out - All about showing your "secret talent," this step involves putting yourself out there. This means talking with people in the community, understanding the situation, but mostly just breaking out of your bubble to discover something beyond yourself.

2. Fail Harder - By not fearing failing, more risks can be taken. With (blank)LAB, a shipping container was transformed on the inside to a pure, white photo studio. The (blank)LAB toured the country, taking photos of designers and community members and asked them to commit to do something meaningful with their life.

3. Make Stuff - "Sometimes, you just have to make something. It might not even make sense," Bielenberg told the audience. By pursuing the Project M website, you can clearly see the list of things Bielenberg has made.

4. Little Bets - Some of the biggest breakthroughs come from smaller discoveries. Bielenberg cited PieLab for this step. Going around with his team in Greensboro, AL where the project took place, he asked each member to describe his or her "secret talent." For one girl, this mean baking pies, lots and lots of pies. "I thought that was stupid," Bielenberg said. But, much to his surprise, pie ended up being the main focus of the project as they created a pop-up pie shop that acted as a space to spark conversations and connection in the rural community.

5. Do Sh*t That Matters - Last but not least, Bielenberg addressed doing things that make a positive impact on the world around us. Not so different that the driving motivation behind Design Ethos as a whole, Bielenberg managed to add his own flavorful twist to the sentiment. NADA Bike, whose slogan is "Less cars. Less gas. Less smog. Less paint. Less gears. Less lycra. Less fat. Less is more," epitomizes the marriage of "thinking wrong" and creating something right. Giving each person a steel frame, NADA members learn to build their own bikes and contribute to an online community database on the process. 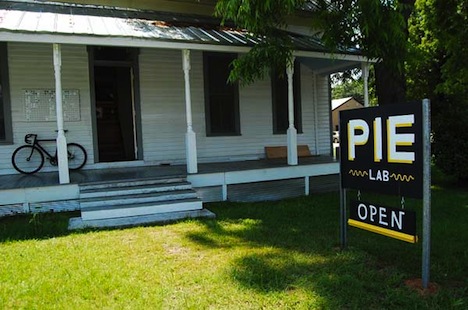 Now Bielenberg and Project M only does work for companies driving social change in their communities and the world. "Positive change can happen from for-profits," Bielenberg said. He also talked about a project he was currently partnered with Alex Bogusky and Rob Schuham called COMMON, a company that hopes to provide an example of shared brand value.

Jumping to the next panel, Matt Leavell and Charlie Cannon shared the stage as they spoke of a joint project, the Alabama Innovation Engine (Engine). A project they had been working on for the past year to create positive change and encourage economic development in rural communities. Funded jointly by Auburn University and The University of Alabama, Engine has been incorporated into a social innovation studio taught by Cannon at the Rhode Island School of Design. 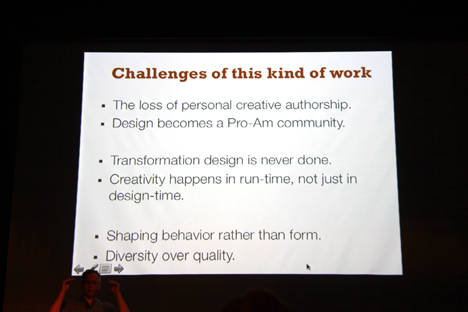 Canon speaks to the challenges with "this kind of work."

Cannon spoke to some of the challenge of "this kind of work," meaning long-term, socially driven projects that involve collaborative design thinking with residents of the area. "The artifact that you are designing is not the final product," Cannon said. "The final product is the social impact your artifact will have." 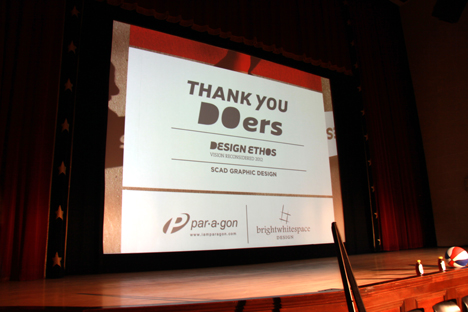 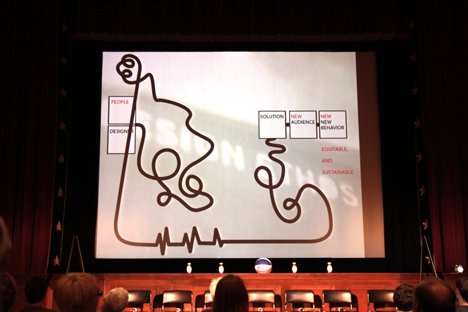 A visual representation of the design process presented by Scott Boylston.

Following panel presentations, both the Do-ference and Ethos Conferene reconvened at the Trustees Theater for final presenations from the six Do-ference teams working on Waters Avenue. From "digging" Harambee Farms to creating 400 lb baby Adoption Associations (shout out, Team D!), the teams came up with radical, yet feasible solutions to be implemented in the Waters Avenue community. 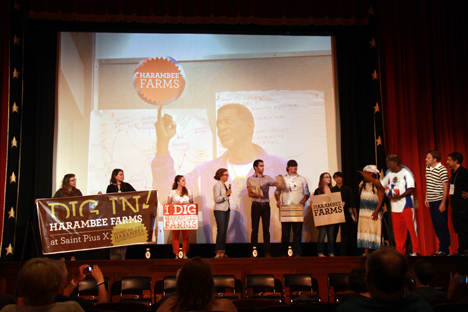 Team Empowering Youth focused on use and advocacy of Harambee Farms as a tool for education about food and its source.

Team Empowering Culture brought it in and created the powerful presentation seen below. In an effort to get the community to recognize the distinct 400 pound planters throughout the street, Team D created an "adoption agency" that encouraged citizens to "adopt" a planter and reinvent its use. Its current use being empty and abandoned, any new purpose would be a great improvement and would hopefully bring the Waters Avenue locals closer together. 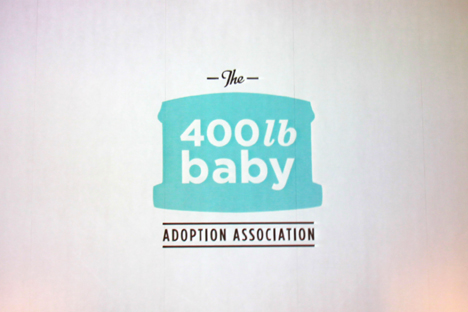 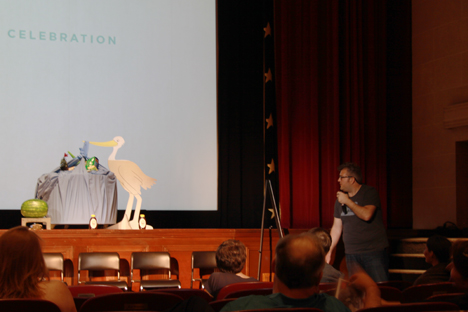 Josh McManus presenting the stork and its 400 lb. baby. 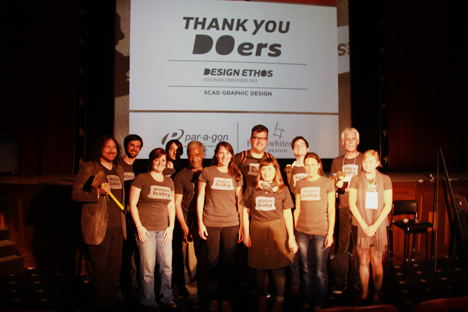 The closing reception was held at the beautiful SCAD Museum of Art, featuring an interactive table of current and past exhibitions, and, of course, organic cider. 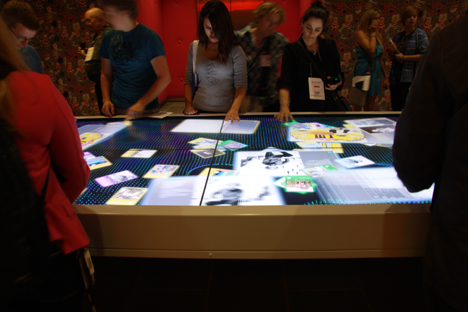 SCAD Museum of Art's interactive table in the front lobby. 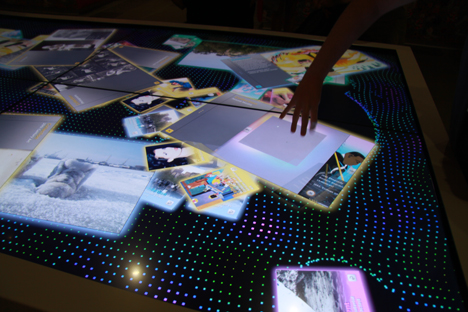 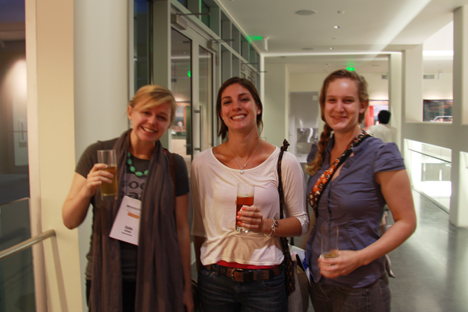 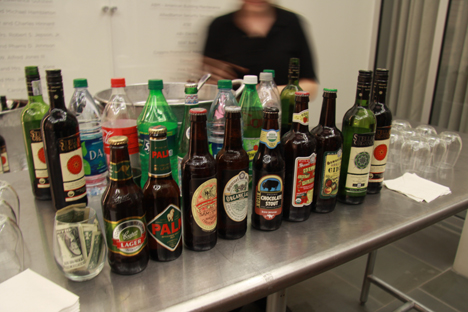 A delectable assortment of organiz ciders.

While many left the conference empowered and inspired to take thoughts on "doing good" and "thinking wrong" back to their respective practices and communities, overarching was the question of what will come next for Waters Avenue. I hope to see some of the projects presented enacted in the community and will stay tuned to hear the results. Overall, I had a fantastic time meeting some amazing social innovators, thinkers, and makers from around the world. Cheers to Scott Boylston and the rest of the Design Ethos crew for making this a massive success!