David Berman was the keynote speaker for the first night of Design Ethos, and spoke to the importance of accountability in design and the ethics required to be a designer. A Canadian communication designer and author of the book, Do Good, Berman is also a Fellow, and the Ethics Chair of the Society of Graphic Designers of Canada, and President of the first elected board of the Association of Registered Graphic Designers of Ontario.

Core77: How did you first get involved in working on the Code of Ethics for designers?

David Berman: When I first got out of school, I started my own design studio, which was very much about typography. I was completely immersed in typographic design—I could create these wonderful perfect little worlds of columns of type with hanging punctuation and column rules and just the right type. and ignored the messy world outside. So, I was pretty happy. I had this radical feminist girlfriend at the time and we got into a debate one night about the role of the designer in society. She was blaming a lot on designers. She was talking about objectification of women, environmental impacts, and all that. Mostly it was about women. And I said, 'You're crazy. I mean, I buy into feminism but I do not think that I am responsible for all of that.' But I was wrong. She convinced me that it designers were responsible for the images they propagated. I decided that I had to do something about it.

I wrote up this manifesto to have a national Code of Ethics about how designers need to take responsibility for their portrayal of women and the environment and took it to my first ever meeting of my local chapter of the Graphic Designers of Canada,. It was the annual general meeting and so mostly boring and at the very end, they asked, 'Is there any other business?' I put up my hand and said, 'Yes, I have this manifesto for designers!'

Then this debate starts happening, back and forth. One person said, 'That makes no sense! We just follow orders from the clients,' and then his wife and business partner stands up and just says, 'Actually, I've always been a little annoyed by the way we just do this stuff.' The woman in charge of the chapter, Mary Ann Maruska, pulled me aside and said, 'Are you serious about this?' I was. She told me, 'In order to do this, this isn't something we do at the local level. We do it at the national level.'

It took twelve years, but I became president of the chapter and then became a part of the national executive and I led the development of a new Code of Ethics. We wrote the code to include all of this stuff on feminism, environmentalism, messaging culture, and we had a national committee. 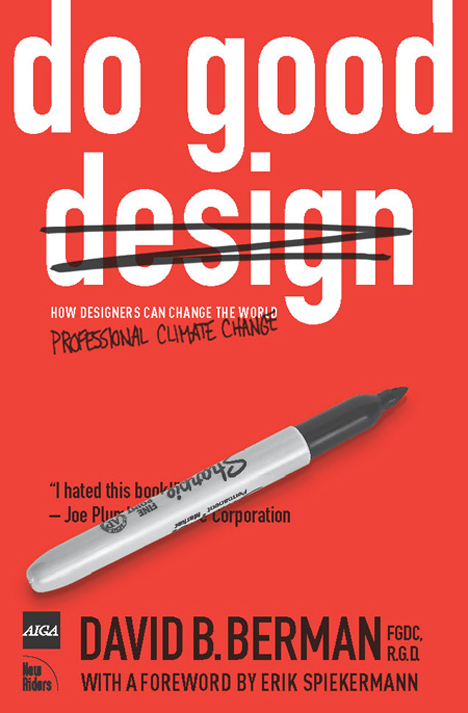 In addition to the Code of Ethics, you've been a huge mover in the certification of designers in Canada. How did that develop?

Are you seeing this movement develop in the States?

I've spoken several times in the US about the idea of certification of graphic designers. The response is cold: "No! Anyone can design! Don't tell me who can design! Don't regulate my industry!' To me, that's very limited thinking. Certification doesn't stop anyone from designing I'm thinking, you're professionals. You should be recognized as professionals, committed to a protected minimum standard.

If you want to be a lawyer, registered nurse, engineer or a doctor, you go to school, intern, work with experience professionals, pass an exam, and then earn a certificate eventually they give you a certificate and say, 'Here. You're a doctor. Everyone can trust that you have committed to a minimum standard of knowledge, ethics, and procedures.'

We designers have as much power as any of those professions. We could argue we have more power over what is going on in the world than many of other professions that are certified. We've been remiss to recognize that power.

When you certify a profession, it means you say, okay, the schools have a curriculum, which they've developed in concert with the professional organizations to make sure the people coming out of the school have what they need; you have formal examinations, which in Ontario has four parts. Only one quarter of it is about design knowledge (do you know what RGB is versus CMYK). Another quarter of it is how do you run a professional practice. Another quarter on ethics So, for example, that when you promise to deliver a project, you'll still deliver it even if you realize it will not be profitable for you. What were some of challenges you encountered in enacting this policy?

Well, they were things like figuring out how we are going to promote the idea, how are we going to get the legislation through. On the other hand, there were other issues that we didn't see coming, but, since we've been through it, anyone else who wants to do it, we can brief them on how to achieve it with half the effort that it took us.

We have an examination already developed. It's hard to develop and this examination: we figured that out. So, of course, I imagine an examination in the United States may be different, but it wouldn't be that different.

I've presented on certification in different parts of the world. In Norway, I made a speech like the one that opened Design Ethos, and some people approached me after and said, 'Really? We want to do that.' And two years later, we had it done. Indonesia? We're discussing it now. United States? I've pitched this three or four times now, and either I get a lack of interest or just 'Well, that's un-American.' I say, 'What's un-American about it?' They say, 'Well, you're restricting people and what people can do.' I'm not restricting anything! Anyone can design.

It's like this building we're holding this interview in. If it's more than three stories high, you need to have an architect sign off the plans, but if you want to build a shed in your back yard, you can design and build that yourself. No one's going to stop that. You and I don't worry about the building falling in on us because we know there have been permits, certifications. How would you feel if architecture was just like the Wild West? Anyone could design a building.

Now, I'm all for architects being certified. I want both... For transportation systems, we deserve certified designers. I can just take it apart case by case. You can talk about a fire at a German airport where people died because they couldn't find the exit signs. The number of additional people who died in the tsunami in Indonesia because we didn't have international standards for the symbols that say what do you do in the case of a tsunami. There are standards committees for signage working to fix that.

How do you divide your time between this advocacy work and your professional practice as a graphic designer?

In my work, I move in three spaces. We deliver design projects and we have a philosophy that we don't do work for anyone who is not helping make the world better. That's coupled in with the quadruple bottom line strategy that I covered in my keynote. We're very strategically oriented. We go deep identifying how will we measure success. Then, we make sure that the strategy is in alignment with our values, with the mission of our clients, for the planet, for the materials, for everyone involved. We strive to have each project have outcomes that are positive in the four areas of sustainability or, at the very least, neutral. We don't do any harm.

The second area is that I work a lot on teaching others how to do what we do. Whether it is about the idealism of sustainable design thinking, or about something very precise like web accessibility—for example, right now, there is world-leading legislation passed in Ontario that says that not just government, but all large organizations must make their websites accessible to people with disabilities. That's not just good for a loving society, it's actually good business because when you design for the extremes, you tend to create a website that more accessible for everyone, for all technologies... That, for me, is a wonderfully pragmatic example of mixing the idealism of creating a better world through design, and something very practical.

Then the third part that I do is pro bono work in helping work on new standards to create a stronger profession, with organizations such as GDC and Icograda and ISO and the United Nations. Whether that might be writing or helping organizations figure out, 'How do we do this?' So those three areas compliment each other. If you're not doing it, you're not going to remain an expert. If you're not trying to explain it to others, then you never really share your knowledge. And if we don't collaborate with others to continuously improve the infrastructure of our profession, then there's a huge opportunity lost. So the three pieces work well together. There's never been more hope: however there is also great fragility and urgency. The future of civilization has become our common design project, and so we need to work as a profession to recognize our power, and then get serious in committing to what our professionalism is going to be about. We need to not just do good design... we need to do good.

See all of the Design Ethos: Vision Reconsidered 2012 coverage: