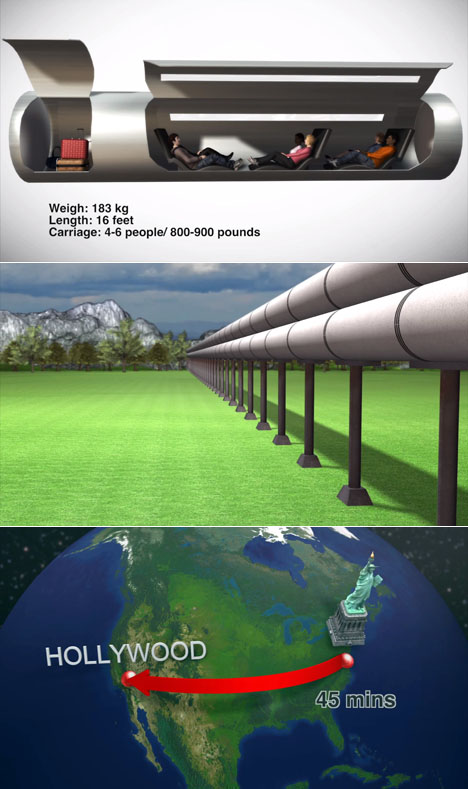 Breathlessly billed as "Space Travel on Earth," a transportation concept from Evacuated Tube Transport Technologies, or ET3, would reportedly be able to whisk passengers from New York to L.A. in 45 minutes. The science sounds a little breezy, but the idea is that a long, airtight tube is constructed between point A and point B. The tube has the air sucked out of it, creating a vacuum, and a cylindrical "car" carrying six passengers is then propelled via maglev at speeds up to 4,000 miles per hour.

ET3 claims we would not arrive all flat-faced, but would somehow experience just 1G of atmospheric pressure during the ride. On the green front, they say much of the energy expended to accelerate the capsule would be recovered during the braking process. Then there are the outright incredible claims:Speed in initial ET3 systems is 600km/h (370 mph) for in state trips, and will be developed to 6,500 km/h (4,000 mph) for international travel that will allow passenger or cargo travel from New York to Beijing in 2 hours. ET3 is networked like freeways, except the capsules are automatically routed from origin to destination.

ET3 capsules weigh only 183 kg (400 lbs), yet like an automobile, can carry up to six people or 367 kg (800 lbs) of cargo. Compared to high speed rail, ET3 needs only 1/20th the material to build because the vehicles are so light. With automated passive switching, a pair of ET3 tubes can exceed the capacity of a 32 lane freeway. ET3 can be built for 1/10th the cost of High Speed Rail, or 1/4th the cost of a freeway.