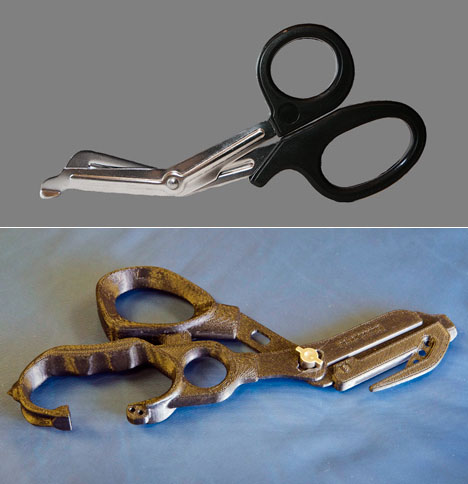 Trauma shears (top photo) are those angled scissors that emergency personnel use to cut through material to extricate someone or expose an injury for treatment. I first saw them during my ambulance days and while I was amazed that they could sever seatbelts with ease, I remember being surprised at how flimsy they were; they had plastic handles and were lighter than I expected. On the design front they had a few elements differentiating them from regular scissors: They were stubby, sharply angled, the interior sides of the blades had little lines cut into them, and there was a kind of flange at the point that would ride flat along someone's skin if you were cutting off a pant leg or similar.

I never once used them in the field—design school and ID ultimately proved a stronger draw than wearing a blue jacket and doing CPR—but apparently, trauma shears suck. "They are imprecise and made of cheap, shoddy materials with a blade that dulls quickly," says New-Mexico-based ER doctor Scott Forman. "People just throw them away."

Years ago Forman set out to design a better pair of trauma shears. With titanium-nitrate coated blades and a carabiner integrated into the handle, Forman's design proved popular with local EMTs, and soon Forman had started a company, applied for a patent and cranked out over 1,000 pairs.That was in 2008. In 2010, Forman applied to the New Mexico Small Business Assistance Program, which subsequently paired him up with Mark Reece, an engineer with metallurgical experience. Reece took the design to the next level with research, experimentation and even biomimicry:

"I drew in material on everything from hairstylists to fabric manufacturers and tried to assemble a picture of what was going on here," he said. "I got out the microscope and video camera and examined what happens as each blade attempts to cut fabric."

Reece learned how serrations should be made and combined that data with information on dentation of animals such as sharks, whose triangular teeth are powerful shearing machines. He then tested various blade angles on all the materials. Reece machined trial blades and gave Forman reports and prototypes. "We honed in on a design that gives much better cutting capability," Reece said.

...The base-model shears they developed has an ergonomic, ambidextrous handle with an integrated carabiner. The blade length and handle pivot point are engineered to generate considerable torque, so less effort is needed for heavy cutting. The blades are high carbon content surgical stainless steel that can be autoclaved.

"We incorporated a proprietary blade design," Forman said. "Mark is excessively meticulous. He created the pitch of this blade, the troughs between the serrations, the angulations of the serrations and pitch of the other blade—the nonserrated side—to create shears that can cut through everything. It's brilliant."

The shears also have a ripper attachment with a replaceable blade to zip through clothing, a bottle opener for medications, a key for oxygen tanks and a window punch. "It's an all-in-one tool," Forman said. "EMTs suggested some of the features."

Forman's company, Heros, is currently "negotiating prototype production, product manufacturing and distribution." More details on the story of the shears are here.