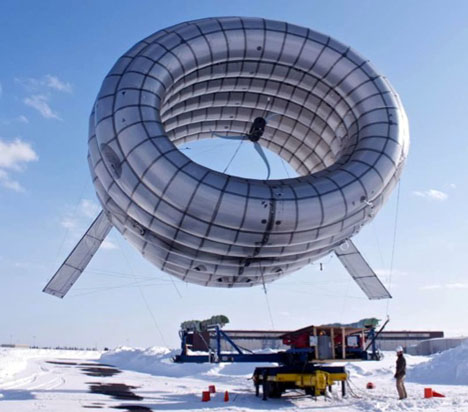 The problem with wind turbines as an energy source are those darn towers and enormous blades. No one likes living under them, with people complaining that the stroboscopic effect of continuously sliced sunlight gives them headaches. Thus wind farms have to be tucked away in remote locations, which means trucking the construction supplies out to those remote locations to build them in the first place. And the construction isn't easy: The sites are of course chosen for their persistently strong winds, a crane operator's nightmare.

Altaeros Energies, a company developed out of MIT research, has been working on a rather brilliant solution: A floating wind turbine. By placing the blade inside a tethered, massive balloon, you can float the thing up to high altitudes (where the winds are five times stronger than what you get at the top of a tower), no construction necessary. And neighbors aren't likely to complain about a balloon 1,000 feet in the sky.

Sounds crazy and undoable, doesn't it? That's probably why Altaeros has just released a video showing their system in action:

What you saw there was a scaled prototype, 35 feet in diameter. During the test run it arrived on-site in a dock attached to a trailer, then deployed, activated the turbine, and returned to the ground—all automatically. At its highest altitude of 350 feet, it successfully got the turbine to generate twice as much juice than it gets at tower height. We'd say Altaeros is one to watch.