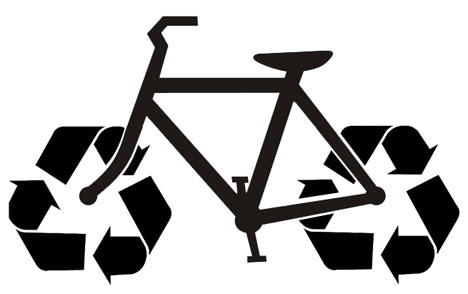 A group of third-year industrial design students at the University of Louisiana Lafayette, led by professor Ben Bush, have developed a bicycle-based aluminum can crushing machine. Called the pRecycle Machine, it will be debuted tomorrow at Louisiana's Festival International in Lafayette, as part of a local Keep Lafayette Beautiful initiative.

The pRECYCLE machine is a human-powered can-crushing machine meant to recycle aluminum cans and catch the attention of festivalgoers who have a lot of cans to throw away. It looks like an ordinary bicycle in some ways, but it actually can crush up to 900 cans every five minutes. Those interested can pedal by themselves, or let one of the students who designed the machine pedal instead. Either way, participants will be contributing to the recycling effort and a new push to cut down on the waste generated by most festivals.

...Bush said the bike is equipped with two piston-like arms that collect the cans into a giant hopper and then crush them. The bike is powered by industrial design students who plan to ride it right in the middle of Pac Sans Souci across from Recycled Cycles, a sponsor of the project. As an added bonus, festivalgoers can also go for a spin if they want.

Sadly, neither local papers, U. of L.'s website, Flickr, YouTube, or anyone seems to have a single image or video of the contraption. We know there's got to be some U. of L. ID students reading this, or Lafayette locals, so please head to the festival this weekend and shoot us something! The pRecycle Machine will be situated at the Parc Sans Souci, across from the Recycled Cycles bike shop on Vermilion Street.