Upcoming Norman Bel Geddes Retrospective (and a Way for You to Grab His Book, Now)

When it comes to the "Father of Industrial Design" title, nine out of ten people would probably confer it on Raymond Loewy. But consider this: Loewy was born in 1893, the same year as Norman Bel Geddes. And while Loewy received his first industrial design commission in 1929, Bel Geddes had opened up his own industrial design studio two years earlier, in 1927.

The influential, prolific, and less-recognized Bel Geddes was an important proponent of the streamlined and art deco styles in product design, and he worked on everything from cocktail sets to automobiles to radios, to say nothing of his extensive concept work. His book Horizons in Industrial Design, from 1932, made an important case for our profession at a time when a fascination with engineering threatened to let the machines, aesthetically speaking, get away from us. "Although we built the machines, we have not become at ease with them and have not mastered them," he wrote. "Our condition is the result of a swift industrial evolution. If we see the situation clearly, we realize that we have been infatuated with our own mechanical ingenuity. Rapidly mutiplying our products, creating and glorifying the gadget, we have been inferior craftsmen, the victims rather than the masters of our ingenuity." Industrial Design, Bel Geddes argued, would gain us that mastery. 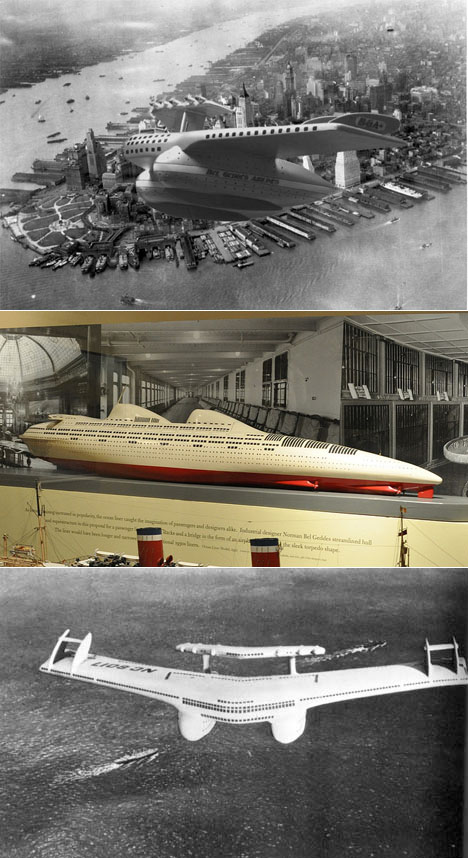 Another Bel Geddes watershed moment was his "Futurama" exhibit for GM at the 1939 World's Fair. The exhibit consisted of a one-acre scale model of a futuristic city stocked with 500,000 individual buildings and some 50,000 cars moving on automated highways. Spectators sat on an EPCOT-like conveyor system that traveled for a third of a mile, winding its way above the diorama, where it was suspended to give the viewer an airplane-like perspective. It was the smash hit of the Fair, mobbed with 30,000 visitors a day. (Check out more images of it here.)

There are two current-day Bel Geddes items I want to hip you to. The first is that the Harry Ransom Center at the University of Texas at Austin is prepping a Bel Geddes retrospective, the first America has seen in over twenty years, that will feature "never-before-exhibited drawings, models, photographs and films from the Ransom Center's Bel Geddes collection." The exhibit will go live later this year and the promo video is below.

The second is about Bel Geddes' seminal Horizons book. While your History of ID professor probably has a dusty copy on his shelf, good luck getting him or her to lend it to you. 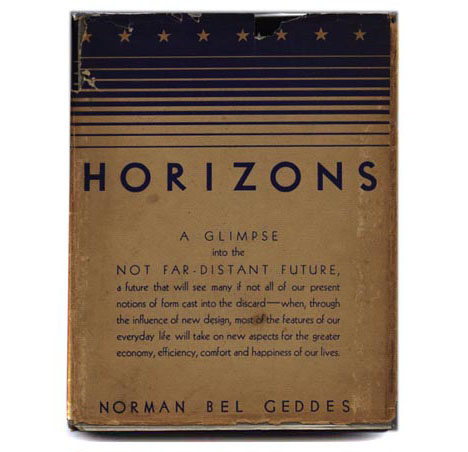 But the good news is the book is available for free (and legal) download here, so you can print out all 300-plus pages. Or better yet, throw it on your iPad or Kindle. Us walking around with his book, on machines that we've mastered; Bel Geddes would approve.

Upcoming Norman Bel Geddes Retrospective (and a Way for You to Grab His Book, Now)