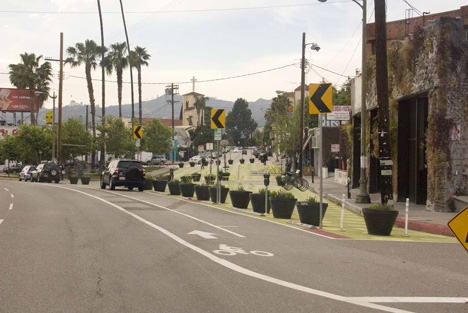 What does it take to change the mind of a city? Concerted effort and pilot projects that prove the concept, says Streets for People's Margot Ocanas and Anna Peccianti, and Frank Clementi of Rios Clementi Hale Studios.

The Sunset Triangle Plaza is Los Angeles' first street-to-plaza project. It was created by Streets for People (S4P), an initiative of the City of Los Angeles City Planning Commission in partnership with the County Department of Public Health. Designed by Clementi, this one-year demonstration project closed down a redundant street where Sunset and Griffith Park Boulevards meet and opened it up for pedestrian use. The plaza opened two months ago to much excitement. 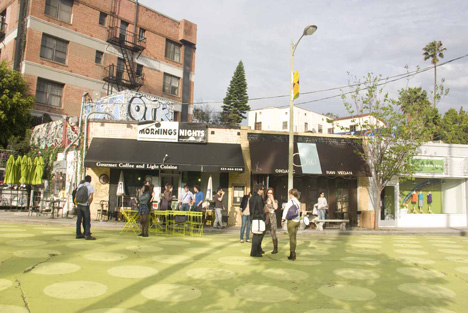 I finally went over to check out the plaza at an event produced by design-enthusiasts Design East of La Brea (deLab), who have given me more reasons to venture on the east side of town. Although Los Angeles has seen its share of road closures for the immensely popular cycling celebration CicLAvia and Los Angeles marathons, these events are small scale one-day events not year-long proposals. At first glance, the 11,000-square feet area doesn't seem like much—the plaza bears all the familiar markings of public space: potted plants, cafe tables, chairs and sun umbrellas. All furnishings were deliberately movable, so people feel empowered to make use of the space, says Peccianti, who used to work with New York's Department of Transportation. But even with small changes, the project needed demanded a series of meetings between the departments of transportation, public works and highways and building and safety. "Designing a street to be not a street is anti-thetical to how the LA system was built," explains Clementi.Nothing really marks the change of use until you note the bright green polka-dot design that now adorns the street. "We're asking people to recognize there's a change in the street. We wanted to make as much of a graphic statement as possible. It doesn't need to stay painted once its role is done," says Clementi. The choice of color was a considered design question, "We couldn't use red. That means 'stop.' Orange means 'CalTrans,' blue meant 'disabled.' Once you run through all the colors, your choices slim down significantly." Clementi settled for a color in between loading green and bike parking green. Bike parking is installed on the east side and basketball hoop is rolled out on the west side. 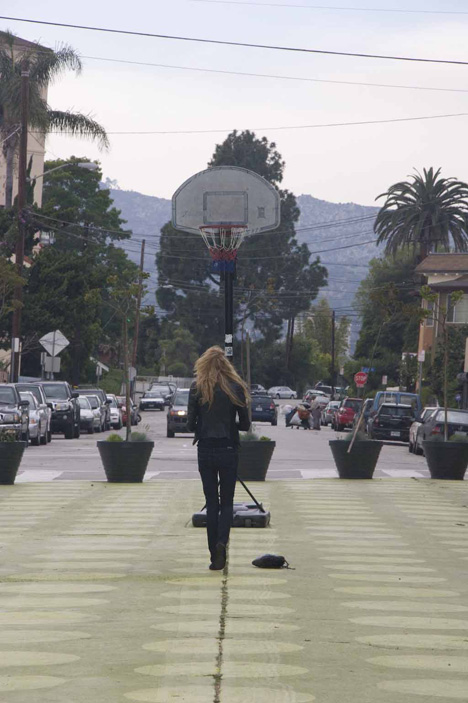 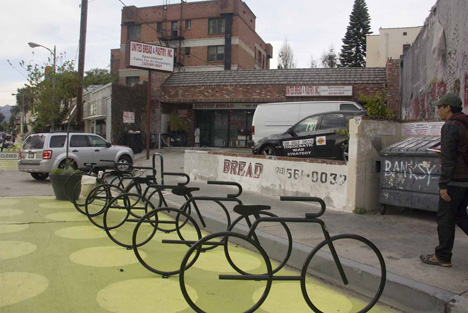 Despite its lack of grand gestures, the plaza is simply an inviting place to stay and, quite frankly, that's all it needs to be. "It's not a project driven by designers," says Clementi. The project's beauty lies in its simplicity and its grand plans of democratizing the park-building process.

Unlike other park projects that take years to complete and cost millions, this "test park" took less than a year and about $25,000 to realize. In the long run, Streets for People (S4P) is working on a manual that walks communities through the whole process—from identifying locations, drumming up support and finding funding. Instead of waiting for the city to take notice, Ocanas wants communities rally to build the kind of neighborhood they want.

"Over 30 percent of Los Angeles is given over to streets and parking lots," says Bill Roschen, Planning Commission President and key figure behind the project, "We're park poor. But what if we could recapture some of that space?" 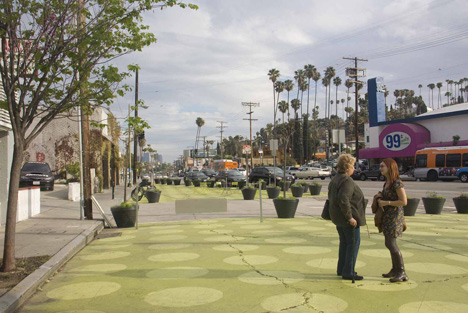 It's a tantalizing prospect, but one that's still going through the ropes of validation. S4P is working on a one-year longitudinal study that captures the effects of the street closure on nearby businesses, and also qualify how the neighborhood is taking on the change. So far, Ocanas says all signs have been positive. With luck, Los Angeles may find itself with a few more places to hang out without breaking the city's already ailing city coffers.

Keep up to date on Streets for People's ongoing effort at Living Streets LA.