A Secret and Illegal Design-Build: The HemLoft Treehouse 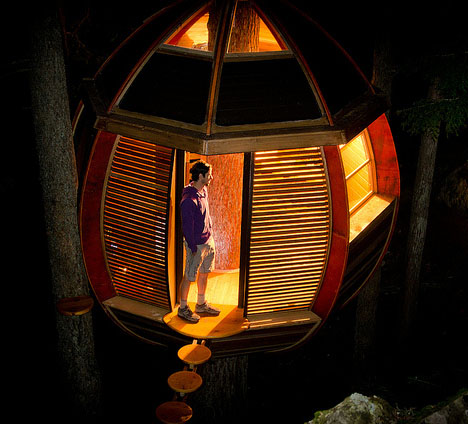 You go into design because you want to create things, and you go into industrial design to create things that will be mass-produced. And mass production, by definition, involves factories and marketing people and finance guys and sales forces, and everyone gets a say. So you quickly learn that unless you're a design superstar, you don't really get to create things on your own terms. Unless you keep things small.

That's why I find this story so fascinating. Joel Allen was a Canada-based software developer who bottomed out financially after his company went broke in the '00s. He taught himself carpentry, and soon set his sights on building a killer treehouse. The rudiments of a design were provided by architecture student friends, and Allen subsequently set about making his dream a reality.

The story is insane on so many levels. First of all, the treehouse is illegally sited on "Crown land," or what's known as State land in the United States—government-protected forests. Secondly, Allen had to hand-carry all of the materials out to the site (and carry the construction waste back out to fulfill his goal of keeping the site as pristine as possible). Thirdly, when his construction was interrupted by helicopter traffic from the nearby Olympics, he had to partially dismantle the structure and camoflauge it to avoid detection. Fourthly, building something structurally sound—let alone level—on a tree clinging to a sharply-sloped mountainside is an engineering feat you'd expect to farm out to a firm specializing in such. Allen pulled it off largely by himself and later, with the help of a girlfriend. 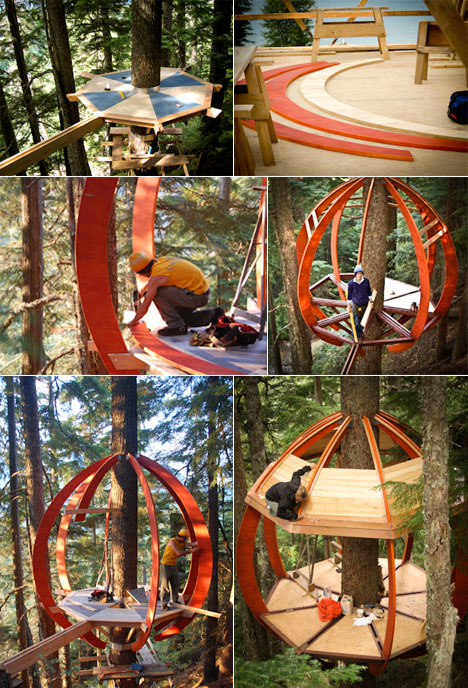 Allen's complete story of the HemLoft, as it's known, is epic and far too long to encapsulate here. But if you can carve the time out of your day it's a highly worthwhile multi-part read, with photos of the construction process.

Here's a video showing what the house (and a surprisingly earnest, for a lawbreaker, Allen) looks like:

A Secret and Illegal Design-Build: The HemLoft Treehouse