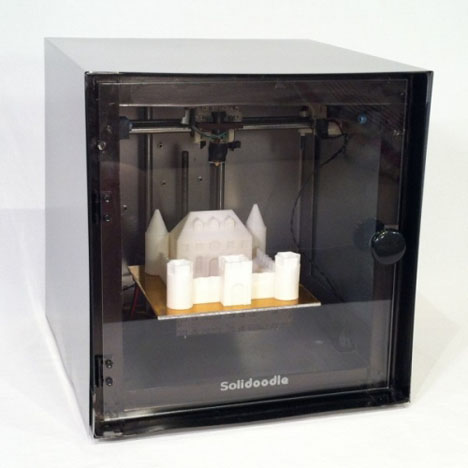 So will the Solidoodle eat MakerBot's lunch? Well, not so fast; the articles we've seen neglect to mention some important-to-designers technical differences between the two machines.

While the build areas of each machine are close—the Solidoodle allows 6" x 6" x 6" construction versus the Replicator's 8.9" x 5.7" x 5.9"—that extra three inches in the Replicator's X-axis will be the deciding factor for those that need to make longer parts.

Just how much higher, however, is frustratingly not revealed. MakerBot claimed their earlier Thing-O-Matic machine had a resolution "approximately as good as a 300 DPI printer," and a Times article subsequently alluded to the Replicator having a higher resolution than that; but the actual number is nowhere to be found on MakerBot's site.

Lastly, I should point out that your correspondent is going off of fact sheets here and has never used either of these machines. For those of you experienced with desktop 3D printers, I'm guessing there are a lot more factors than resolution and build area that would influence which machine you'd choose—perhaps the machine's accuracy, versus printed resolution, or wait times. The Solidoodle's not on the market yet, but for those of you with Replicator experience, what do you think are the salient points a first-time buyer ought to be concerned with?

Until we hear your responses, here's a (rather underproduced) video of the Solidoodle: