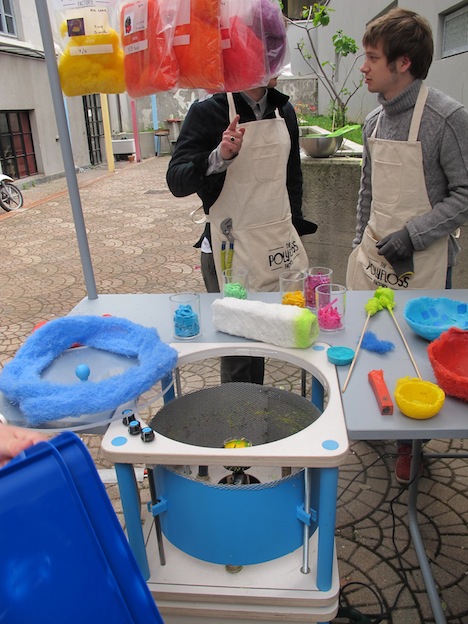 Celebrating it's 175th Anniversary, London's Royal College of Arts (RCA) staged the stellar show Paradise during Milan's annual design week. Over 90 students and recent graduates from the Design Products program spread out on three floors and the courtyard of a former school to, "contemplate the discovery of something or somewhere wondrous."

"Rallied by the desire for change and compelled by dissatisfaction with the present, RCA students will author their own atlases of paradise, landscaped by different paths in the quest for a better future." Wonderfully, the future is paved with process-driven material solutions of the present as exemplified by five of our favorite projects from Paradise: Polyfloss, Sea Chair, Sedimentation Ceramics, Solar Sintering and NSEPS Furniture (which we covered earlier this week). Each of these projects explore new processes to introduce a second life for the materials of today. Paradise looks pretty bright as we follow these young designers into the future. 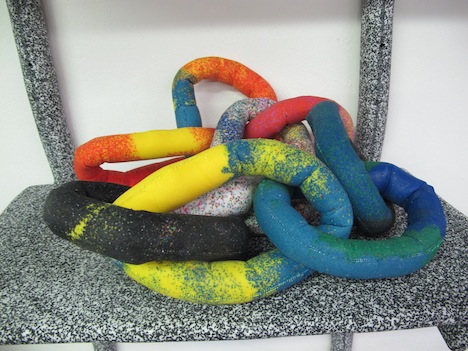 The Polyfloss Factory is a simple enough idea: shredded plastic waste is fed through the chamber of a repurposed cotton candy machine to spin out polypropylene fibers. The "polyfloss" is then remelted to create new objects. Polyfloss gives plastics a new life through micro-manufacturing techniques and with a rainbow of color options, the material has been used to create decorative interior objects, textile-based wearables, and even headphones. The project is by Nick Paget, Emile De Visscher, Christophe Machet and Audrey Gaulard from the MA Innovation Design Engineering program. 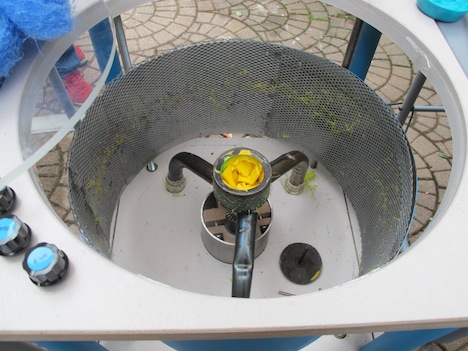 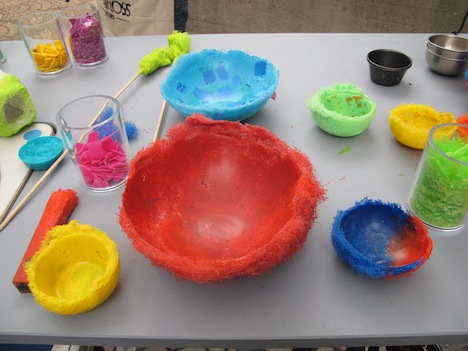 Similarly, the Sea Chair Project reimagines the possibilities of turning one man's trash into another man's treasure. This time, that trash comes in the form of the Great Pacific Garbage Patch, a mass of marine litter in the Pacific Ocean that is almost twice the size of Texas! Designers Studio Swine (Alexander Groves, Azusa Murakami) and Kiernan Jones explored ways to reinvigorate today's struggling fishing industry by providing an alternative to trawling the sea for fish. Instead, in a future Paradise, perhaps fishermen could trawl for plastic. Using a specially designed furnace that could be used to melt captured plastics onboard ships, fishermen would be able to create floating factories to produce Sea Chairs for sale. 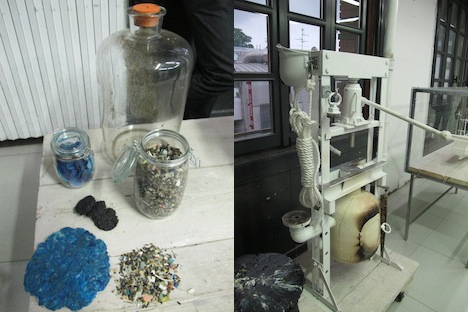 The connection between chairs and seamen originates with sailors requiring carpentry skills for repairing wooden ships at sea; upon retiring many would continue to make wooden furniture in Britain's port towns. We though it made sense therefore that rather than fishermen making wooden furniture at sea they would collect and mould marine plastic into chairs. 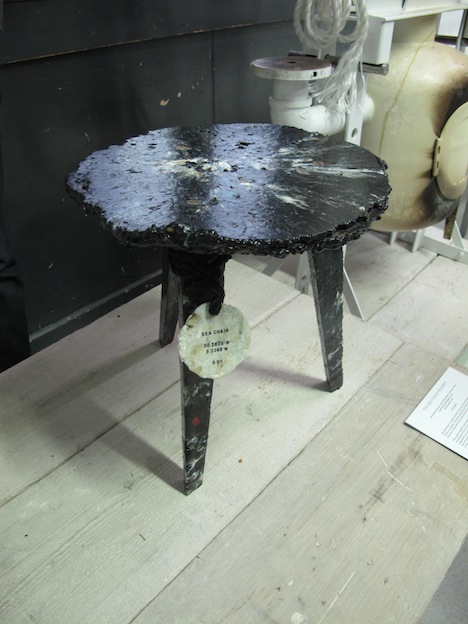 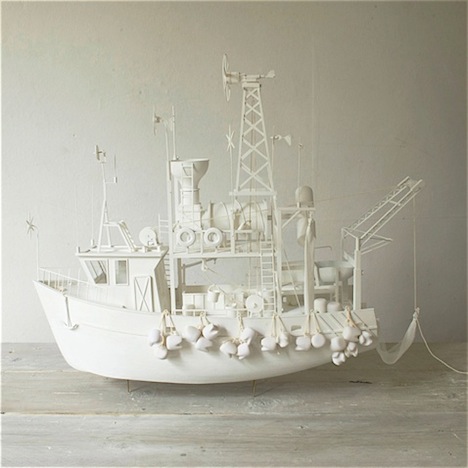 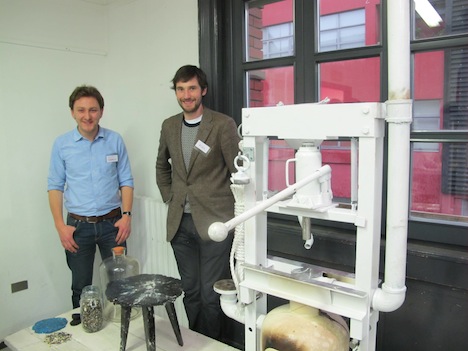 Hillda Hellström's haunting "Sedimentation" vases are an interpretation of the natural geological process. The marbled layers and speckled patterns that emerge are then carved into vases by Hellström. The Swedish-born designer writes, "In paradise, I am not only the fantastical stonemason but I also create the laws of nature and the conditions in which I work." 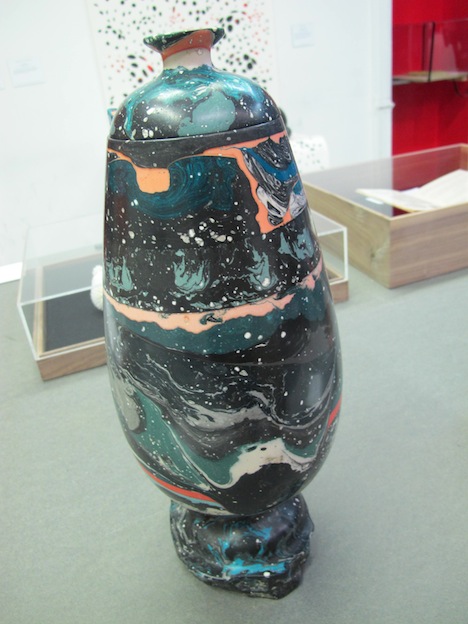 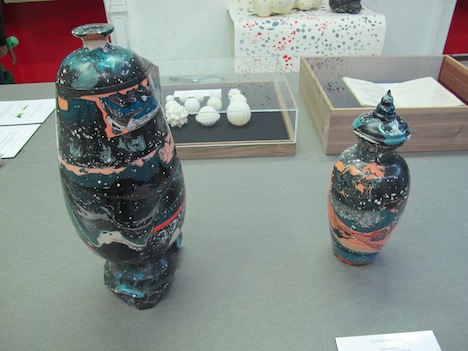 Markus Kayser's "Solar Sintering" project harnesses the suns rays to replace the lasers used in 3D printing process—turning the sand of the desert into solid objects. In a dystopic near-future of limited resources and unaffordable manufacturing costs, individuals are enabled by the sun's energy to power small scale production runs of their own making. 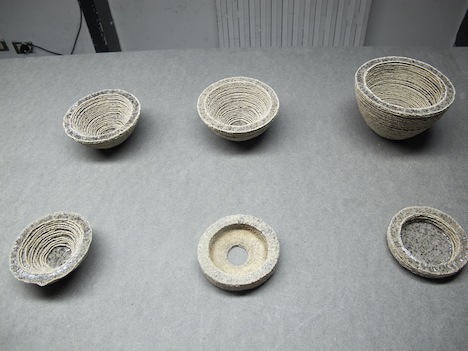 The project might look familiar to Core77 readers—we wrote about it during our coverage of London Design Festival 2011 and it was mentioned briefly in Clare Brass' piece for Core77 on Energy Solutions. Check out this great video of Kayser using his machine in the Sahara Desert near Siwa, Egypt.