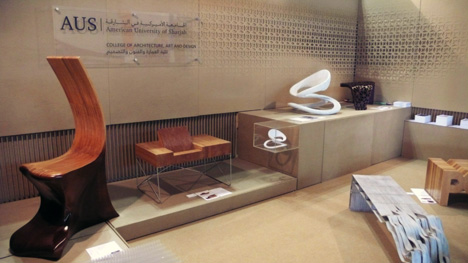 The American University of Sharjah—a United Arab Emirates city just north of Dubai—is named not for a particular Western affiliation but the education system itself: "Located in University City, AUS is a not-for-profit, independent institution of higher education formed on the American model." Founded in 1997 by His Highness Sheikh Dr. Sultan Bin Mohammed Al Qassimi, Member of the Supreme Council of the United Arab Emirates, Ruler of Sharjah, the school is accredited in the States, offering Bachelor's degrees in Architecture, Interior Design, Design Management, Multimedia Design and Visual Communications through its College of Architecture, Art and Design.

Design faculty and students at CAAD have a history of making in applied and aesthetic contexts that contribute significantly to the regional and international material culture made in the Gulf region... CAAD educates award-winning students and graduates that display a high degree of enthusiasm, innovation and ethical professionalism in the changing society of the region. 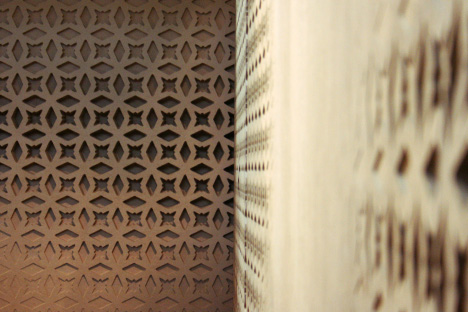 The wall treatment, fabricated by the department, was easily the best in show at Satellite 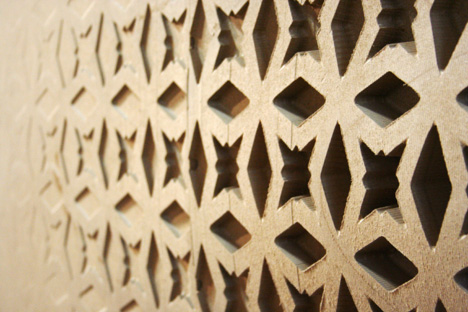 They created the topography with an additive process, then laser-cut the pattern into it...

Their showing at SaloneSatellite was one of the more progressive booths in the fair; Dean Peter Di Sabatino (formerly of the Department of Environmental Design at the Art Center) noted that it is purely a coincidence that the all eight of the participants—from a Vis/Com sophomore to several recent grads—happen to be female Arabs. Indeed, as with the Fuorisalone exhibition at Carwan Gallery, the work transcends narrow labels, running the gamut from purely formal experimentation to nuanced investigations into Middle Eastern history and culture.Over time, the furniture design course has been transformed into a laboratory for the design and fabrication of increasingly complex and refined bespoke furniture. Building on this trajectory, CAAD has recently initiated a unique cross-disciplinary course entitled Form, Furniture and Graphics, available to students in all programs at CAAD. It emphasizes integration of graphic and typographic form with furniture design, exploring their reciprocal relationships. The goal is to expand the definition of furniture beyond normative function toward a hybrid condition that includes a semiotic reading. 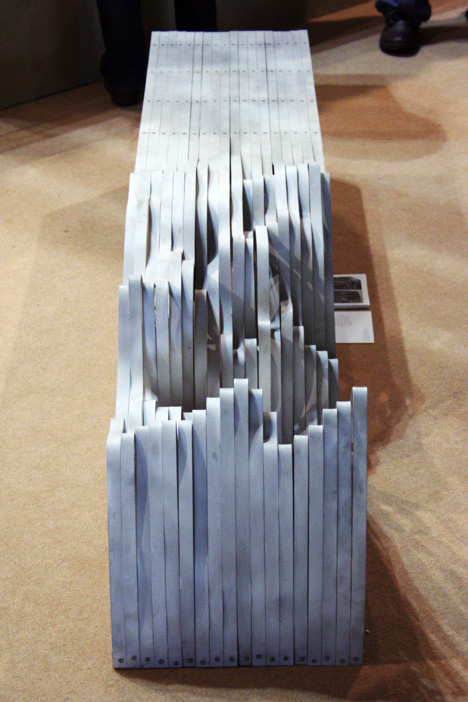 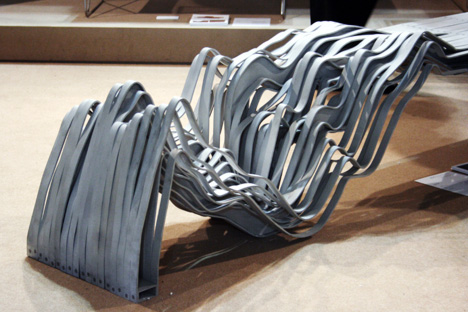 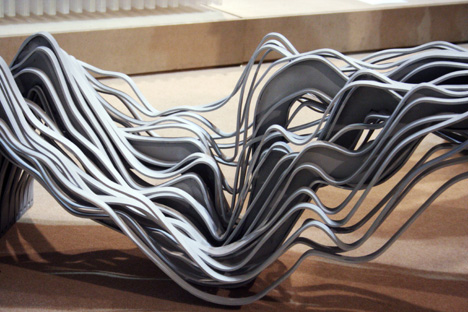 The bench explores eruption as a formal quality and the deregulation of a rational ordering system along its length. The piece consists of 36 3mm-thick hand-shaped aluminum bars fastened with machine screws to a welded aluminum tube frame. The piece was sandblasted after fabrication and assembly. 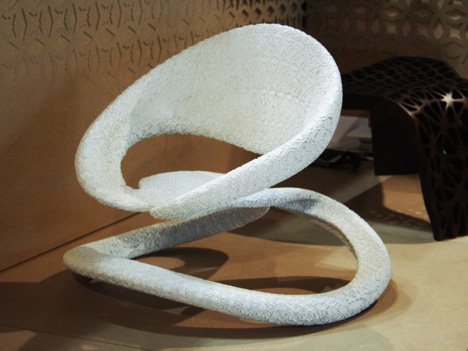 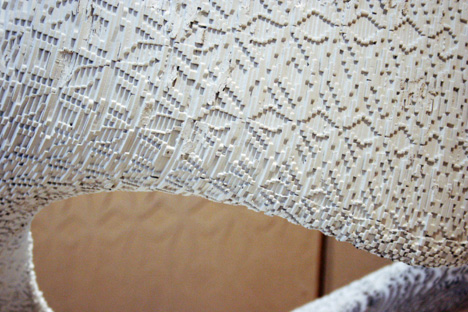 This chair rocks to aid in the act of praying. The concept originates from the desire to aid the designer's late grandmother and mother who struggled to pray in the prostrate position. According to Islamic tradition, those who cannot physically endure prostration may pray in a sitting position. The typographic pattern on the skin of the chair is derived from the Arabic letter kaf and refers to the "The Throne" (Ayatul-Kirsi), a powerful verse in the Holy Quran. The verse states: "His Chair doth extend, Over the heavens And the Earth..." 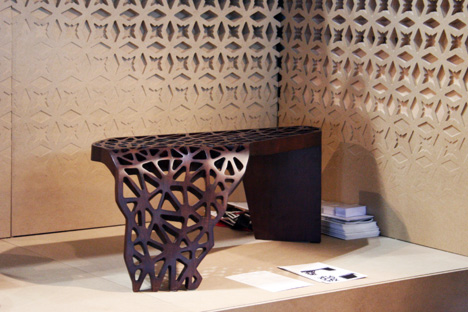 Starting with a triangular unit, this table gradually transforms from a 2D surface pattern toward relief and ultimately into 3D form. A combination of chiseling and hand-held routing with jig and template were used to achieve the pattern condition on the wood. 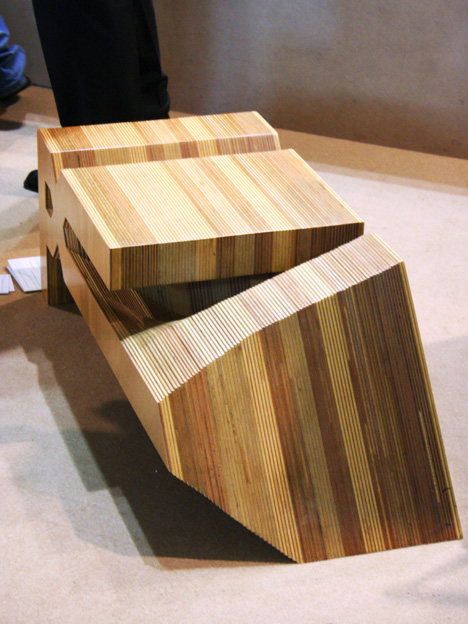 The project intersects typography with 3D design by employing Arabic letterforms as a structure for a furniture piece. The table's form is derived from a cross-sectional transformation of the Arabic word la (meaning refusal, denial or disbelief) into kalla (indicating strong disapproval, protest or objection). The concept is inspired by dissent expressed in the Arab world during the Arab Spring revolutions. 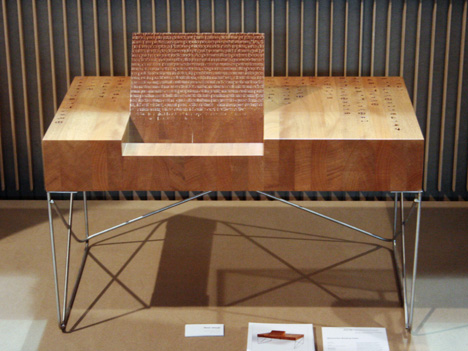 This design-build endeavor emerges from a cross-disciplinary course combining typography and furniture design. The reading table is inspired by the Phoenician alphabet, one of the earliest forms of writing. The table surface engraved with Phoenician letterforms provides a base for Latin script emerging from a new, "modern" tablet. The tablet ultimately supports a book in the open reading position. 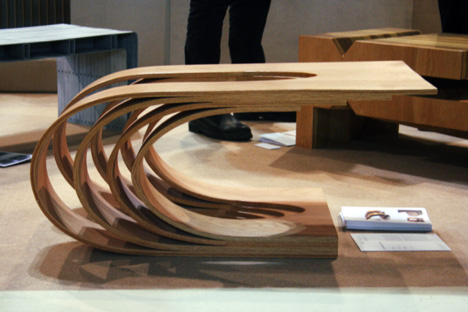 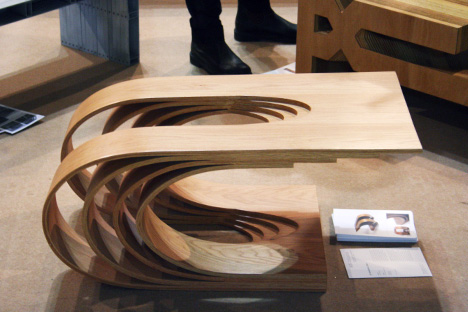 Originally inspired by an overlapping wave pattern, this table combines two simple two-dimensional curves to develop a complex three-dimensional form. The piece consists of four layers that appear to delaminate like a flexed deck of playing cards. Each of the four layers consist of three laminations of red oak that were steam bent, then glue laminated to lock in the final form. 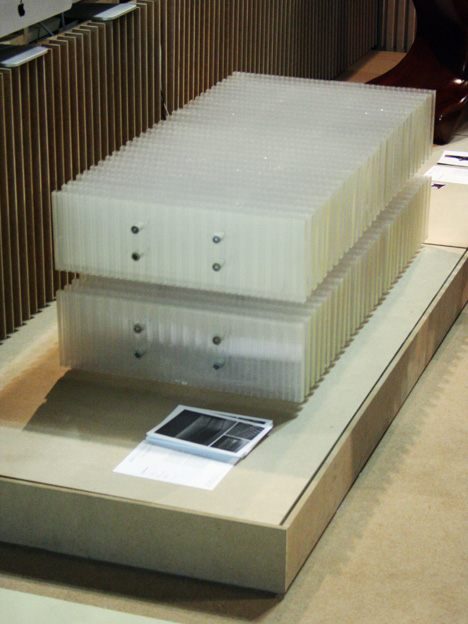 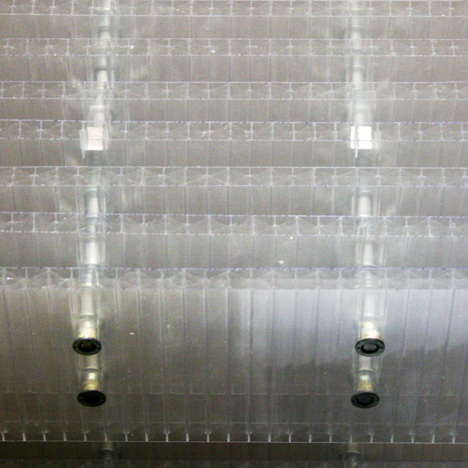 The polycarbonate panels of this table originally responded to the ritual of burning candles. The cells of the panels would define pathways for the resulting wax trails. During the design and construction process, the piece evolved into a celebration of its own existence as a minimalist and transparent object. 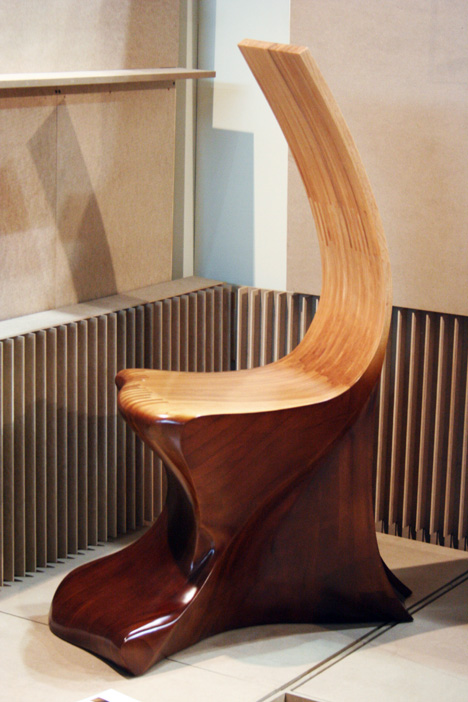 The project integrates graphic and three-dimensional form in a semantic design exploration. The chair's form was constructed by laminating CNC-routed layers of wood and was inspired by Rodin's masterpiece The Thinker. The arching support compels a person to sit in a similar fashion as The Thinker, whose uncomfortable and tortured pose suggests a difficult intellectual struggle. The weaving pattern of text on the surface responds to grid lines established by the wood laminations, and refers to Dante's Divine Comedy, Rodin's original theme for the sculpture.