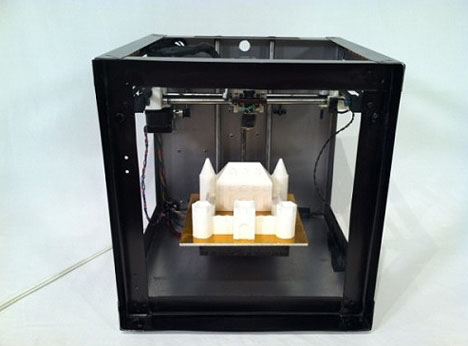 Thanks to our readers who sounded off, following our post on the low-cost Solidoodle 3D desktop printer, on their experiences with such machines. For a first-time buyer, it can be confusing as to what the machines' exact capabilities are, and a little shared info can go a long way into helping the rest of us make the right buying decision.

"I think the largest misconception would be that all of these are turn-key machines," reader Shane Johnston pointed out. "I've needed to tweak temps on the bed and extruder, wall thickness, layer thickness and speed for each print to get decent results out of the Replicator. [But] coming from a history with other printers like the Z-Corps, I actually like this level of control."

Additionally, reader JDB pointed out that while the Solidoodle typically prints at a layer height of 0.3mm, it can actually be set to go as low as 0.1mm. And Solidoodle user Ian Johnson mentions that "I would think that all of the hobby printers have the same capabilities when it comes to resolution. The differences will be speed, and accuracy. The rigid metal case helps with accuracy."

Best of all Sam Cervantes, the founder of Solidoodle—who clarified some of the technical points on their website following our post—helpfully contacted us to illuminate some of the murkier points of 3D printing resolution. As Sam explains:I didn't realize it at first, but this is kind of an ambiguous issue not only on our website but also within the 3D printing community as a whole. So I'll try to clear it up here.

How do we define the resolution of a 3D printer? In the Z direction (up & down) it's easy—we simply talk in terms of the layer height. Typically the Solidoodle—and the MakerBot, from my understanding—print layers every 0.3mm. At Solidoodle we've printed as low as 0.1mm, which looks super. On MakerBot's website, last time I checked, they said they can print at 0.2mm; in all fairness, however, it's likely that their machine could likely print at a 0.1mm layer height just fine. It's important to remember that the layer height is simply controlled by software.

Now let's talk about the resolution in the horizontal (X-Y) plane. The Solidoodle is capable of repeatedly positioning its printhead to within 0.011mm of the same spot each time. I didn't see anything on MakerBot's website about how accurate their printer is in the X-Y direction, but I did see that they use 1/16th microstepping on their motors. So assuming they use similar pulley diamters, the resolution of the two machines should be about the same in the horizontal plane.

To further compound the problem of specifying the X-Y resolution, it's important to remember that the printhead is extruding plastic through a 0.35mm nozzle. It's important to remember that ABS plastic oozes and expands a bit when it comes out of the nozzle. So imagine trying to define the exact position of a garden hose nozzle on an automatic sprinkler system to within millimeters. Even though the motor on the automatic sprinkler may be capable of positioning the water nozzle to within millimeters, in the end the water is going to going to spray out of the big nozzle over a wide area in a somewhat random manner. The same is true of the plastic extrusion nozzle of a 3D printer, although on a smaller scale.

So to simplify the specification of resolution, we typically define it in terms of the layer height, which will be most visible to the end user. In reality the Solidoodle and MakerBot will have about the same resolution.

Hope this helps to clarify things, and I hope I didn't bore you. ;)