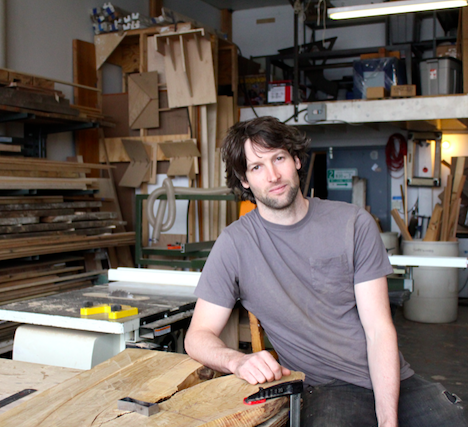 When I stumbled across Analog Modern, Peter Buley's line of rustic yet minimal furniture at the Architectural Digest Home Design show earlier this year, I was an instant fan. As the reclaimed wood trend grows ever stronger, it becomes increasingly difficult to find a unique voice in the mass of raw, unfinished beams and repurposed metal fittings, but by narrowing his focus on smaller, one-of-a-kind projects and relying on his years of experience as a craftsman, he's established himself as a leader of the pack. 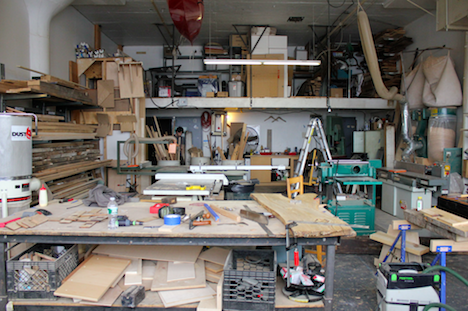 Origins Peter wasn't always exclusively a furniture maker. After he graduated from the School for International Training (SIT) he spent three years in Asia doing humanitarian aid. He went back to complete his Master's program in Sri Lanka in the aftermath of the 2004 tsunami. When the two years were nearly complete, however, he and his classmates had to be evacuated due to conflict that erupted around a disagreement over how tsunami aid was being distributed. 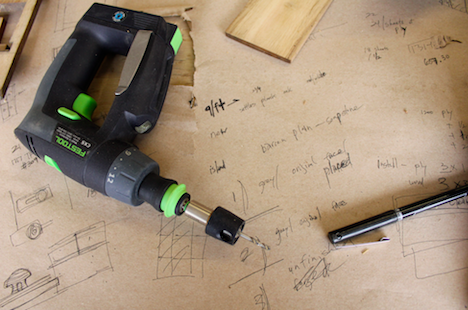 Back in the States, Peter worked with a nonprofit that builds wheel-chair accessible tree houses. He continued to hop back and forth from the US to Asia, but ultimately settled in Brooklyn because it "seemed like a really good place to be a furniture maker. I was starting to gravitate towards smaller things. I knew I really liked the detail of furniture and that precision." He made the move in 2009, but after relaying the cutest meet-story ever he then admitted that moving to New York was only in part because of work but also because his wife was living there. (The condensed version of their story: Peter saw a boarding pass lying on the ground in an airport and handed it to the nearest person, a woman who thought she had lost it during her layover from a thirteen-hour flight from Korea. The two ended up getting seated next to each other on the plane and the rest is history. Awwww.)

Design Ethos Peter's overarching aesthetic and design goals are in the name of his business itself. Analog Modern is the perfect encapsulation of what he tries to do: take something old and give it a new life by pairing it with something new. The Dovetail bench, for example, takes the shape of a dovetail joint and translates it into a completely modern leg that supports a treated piece of reclaimed wood. 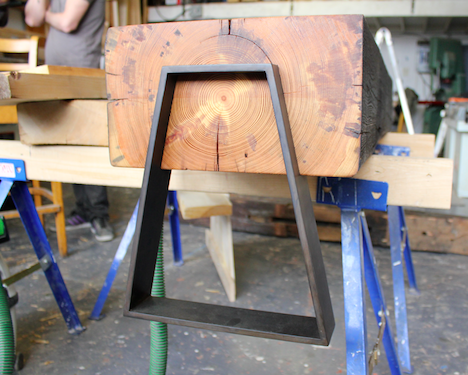 Process He begins with the wood itself. Instead of trying to find the perfect beam or discarded wooden scrap for a particular project, Peter first falls in love with a piece of wood and then decides what to do with it. While most studios do it the other way around, this method honors the wood and—without getting too new-agey here—allows it to be what it is without enforcing the constraints of a commission on it. Instead, he works with the challenges the wood presents. 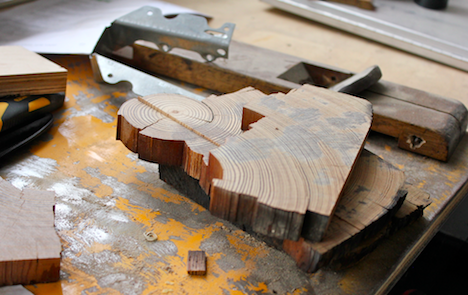 Projects The Dovetail bench is made up of just three pieces. The wooden beam is treated with an aged finish on the front and back with a contrasting natural tung-oil finish on the top. The two legs, which are designed so that the bench can be wedged between them without the need for adhesives, are made from cold-rolled steel, a more expensive but more precise method. 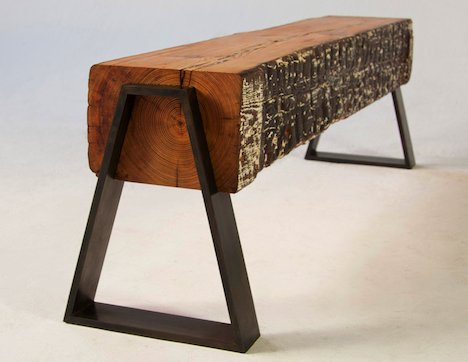 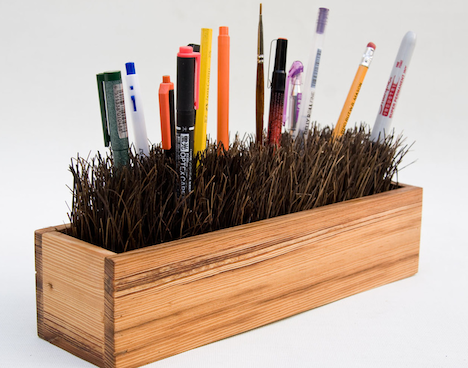 Objects from Offcuts is an ongoing series of small products made from found objects. For the pencil holder (above), Peter found a broom and chopped the head off and made a box for it. "It's like a design exercise. You give yourself a short amount of time. I don't focus on the craft or how it's put together. It's more about ideation. Besides," he says, "I horde. I have all kinds of offcuts around." 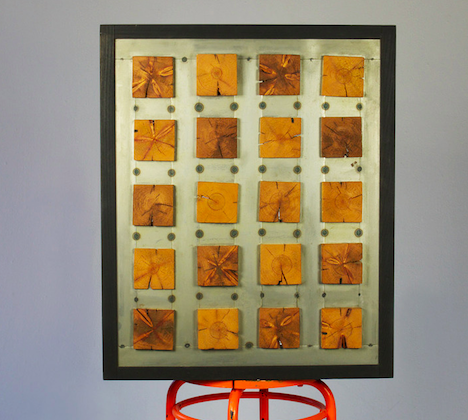 Peter's favorite piece is the End Grain Cabinet, a cabinet door made from end pieces of reclaimed Spruce blocks welded into a steel grid with a treated Ash frame. It currently lives in Peter's kitchen; His wife loved it too much to let him keep it in his studio all to himself. 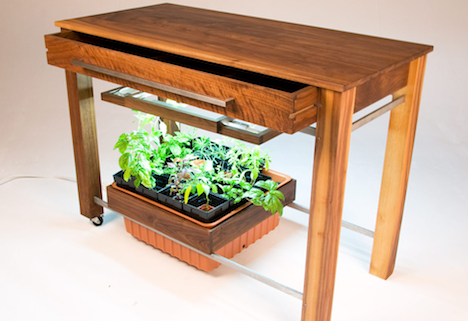 It seems as if many of Peter's projects find a home in his apartment, like the Hydroponic Kitchen Island, which he began as an experiment. Made of beautifully treated Walnut and stainless steel, LED lights are mounted under the table to help the plants grow below. The one you see pictured here is a prototype, but Peter is building a new and improved version for his booth at Model Citizens during New York Design Week. "I'm making it because it's a curiosity and it's something I want to make. It's not something I'm going to sell. It's not a product yet. There's a huge learning curve involved in this. I'm not there with this idea yet. I'll have to build four or five more to really get it." He's already learned a lot in the process, not just technical electronic know-how, but the fact that if you don't enclose the plants in glass your pets will eat them.

Future Projects Peter may be keeping his woodworking projects small, but he's planning something very big in the near future. In the next few years Peter sees Analog Modern growing into a studio that includes other designers as well as his own eponymous line. "There are so many small designers in Brooklyn and we're all learning how to be small business administrators and bookkeepers. Running a business is interesting and challenging and I'm learning a lot, but it's not what I want to do. I'm not a bookkeeper." 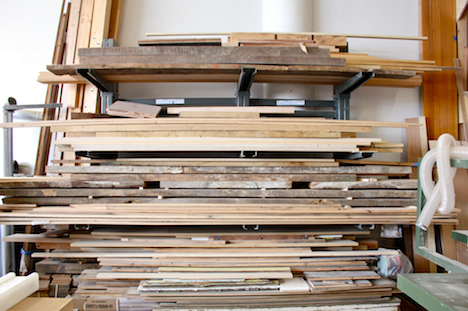 He's already looking around Bushwick for spaces large enough to include a welding shop and a milling operation, which he'd love to have in-house. "It's so hard to get businesses to give you what you want. You can get rough, raw, dirty pieces of wood with nails all over it pretty easily. But if you want something cut in a certain dimension it'll take say, six weeks or eight weeks. It's really slow. Also, those places will de-nail but they'll butcher it. There'll be big pits in the most interesting surface."

Mostly, though, it's about creating a community of craftspeople who might specialize in different parts of the process, or in metal or wood, but who share the same drive to make beautiful objects with their hands—and who might not know how to run a small business all by themselves. "I want to get all of that under one roof so people can just focus on what they want to do and what they're passionate about."

If you'll be in New York for Design Week later this month, be sure to check out Peter's work at Model Citizens. 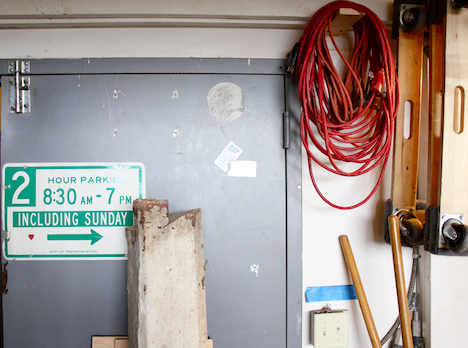 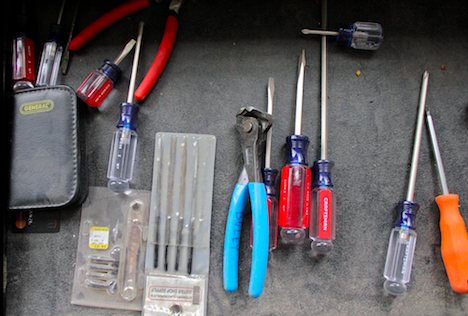 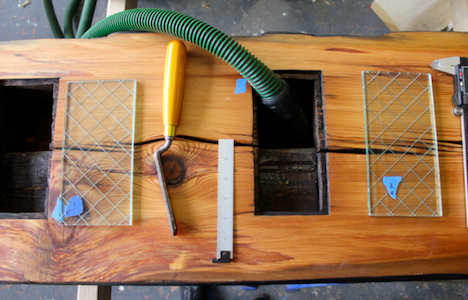 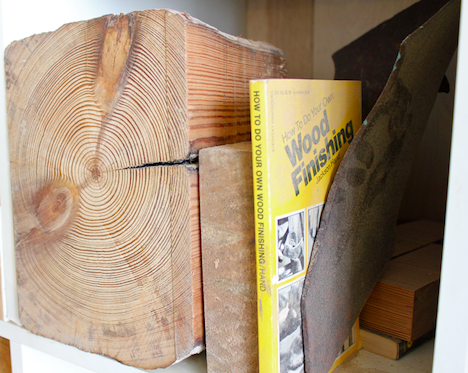 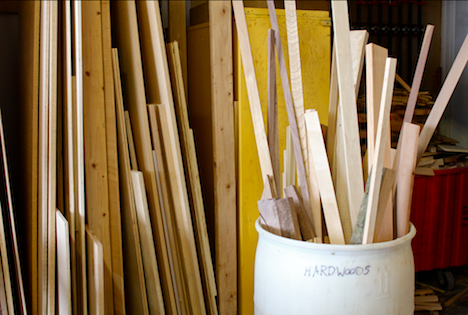