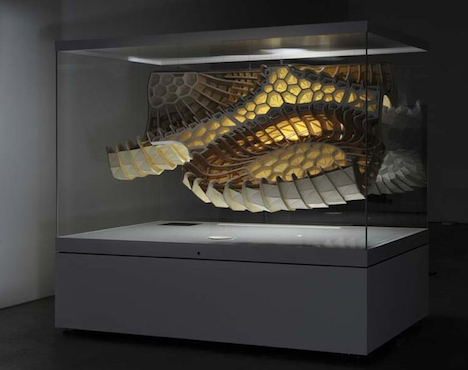 Who would have thought there was a new use for wood in architecture? When I think of wood I think of support beams and flooring, but Achim Menges and Steffen Reichert think about it as a fluctuating material that can work with changes in climate, not against it. We all know that wood warps when it gets wet, and that's typically a bad thing, but Menges and Reichert took wood's natural response to moisture, the fact that it absorbs moisture when it's dry and releases it when it's wet, as well as its physical properties related to grain direction and spent five years researching how they could use that to their advantage in a new building material.

What they eventually came up with is a radical new system they've called a HygroScope, "a climate-responsive natural composite that can be physically programmed to compute different shapes in response to relative humidity," they explained. When the humidity inside the glass case is increased, the HygroScope seems to breathe, intuitively responding to the climate change by ventilating the increased moisture in the air.

"The system consists of custom developed elements made from a combination of quarter-cut maple veneer and synthetic composites. More than 4,000 geometrically unique elements are digitally fabricated and the complex substructure is robotically manufactured. The composite system elements can be programmed to materially compute different shapes within variable humidity response ranges by adjusting the following five parameters: [i] the fiber directionality, [ii] the layout of the natural and synthetic composite, [iii] the length-width-thickness ratio and [iv] geometry of the element and especially [v] the humidity control during the production process."HygroScope was commissioned by the Centre Pompidou for its permanent collection, and will be on display in their "Multiversites Creatives" exhibition, which opened last week and runs through August 6, 2012. 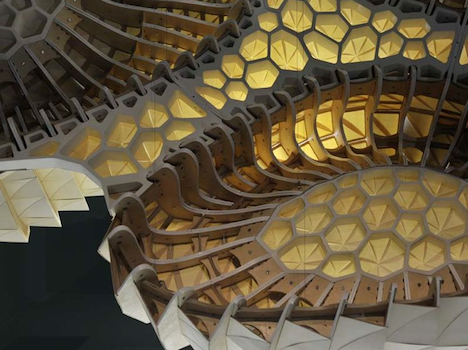 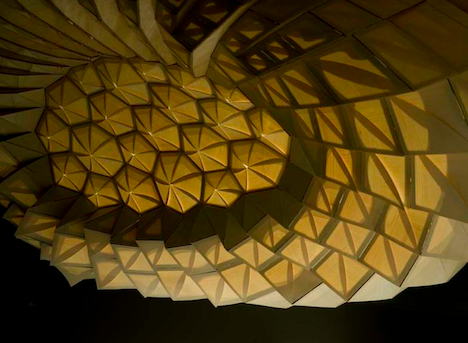