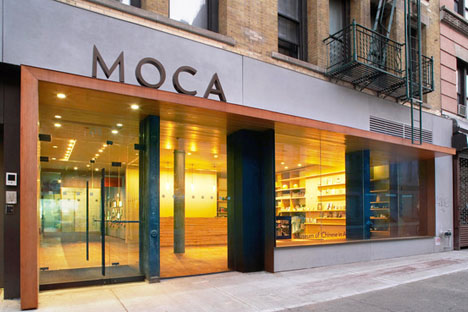 Just blocks away from Core77's NYC offices is the latest location of the Museum of the Chinese in the Americas, handsomely designed by Maya Lin and opened to the public in 2009. I live in the neighborhood, pass it frequently, and have been inside the beautiful interior several times. But what I find distressing is that less than three years after its opening, the exterior is starting to look like this:

In short, the once-beautiful wood of the initially spiffy exterior is not standing up to the ravages of New York's brutal summers and harsh winters. So, I have a question for practicing architects: Whose responsibility is something like this—the architect's, the structural engineer's, the general contractor's, the building owner's? When an architect specs out a material like wood for a harsh urban environment, who steps in and determines the appropriate finishes required to protect it long-term? Is there a maintenance schedule handed over with the keys to the building, in the way that homeowners are advised to re-seal their backyard decks every few years?

I realize this problem is not limited to architecture, of course. A few feet in front of the Museum sits the row of parked cars common to every block in Manhattan, each bearing the scars of parallel parking: 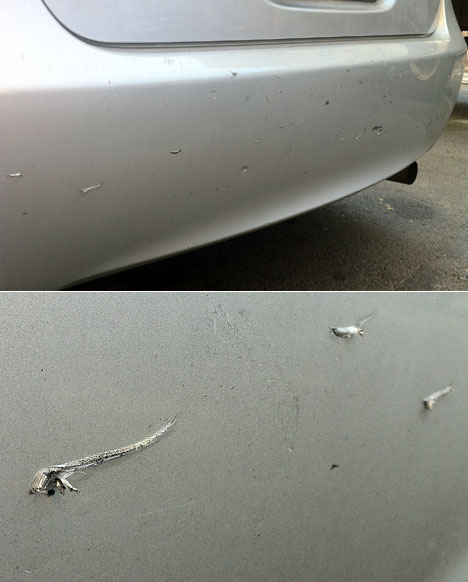 Whose responsibility is that, the designers', the plastics suppliers', the car owners'? Surely these are not desireable signs of wear, and the manufacturer realizes their products will be driven in cities and parallel parked either by or among the clumsy or inconsiderate. Why is this acceptable? Do we simply accept, as with cell phones, that they must be protected by us purchasing aftermarket cases and "Bumper Badgers?"

In any case, these things occurred to me after reading about the sad and somewhat silly goings-on with the World Trade Center and its symbolic height. As a New Yorker unfortunate enough to experience September the 11th of 2001, it is not important to me how tall the new building is; it is only important that something be rebuilt. But it's of tremendous significance to the Government that the building be precisely 1,776 feet tall as the number coincides with the year of this country's founding. And that number is now looking doubtful due to technicalities and perhaps a design failure similar to the first two I mentioned, if those can be considered failures of design.The central issue, which reeks of absurd technicalities, is this: In building height, antennae don't count. The original plan was to build the WTC to a height of 1,368 feet and add the additional height by capping it with a mast. But this mast was to be clad in a "radome," an enclosure of fiberglass and steel; so even though the mast part wouldn't be occupied, it would technically be part of the building and not a mere antenna, thus hitting its target height.

However, building developer Douglas Durst has announced he's not going to add the cladding anymore, which means the building will no longer be considered 1,776 feet. And he's decided not to add the cladding because the design of it does not take repair and maintenance into account:

"There was no real method to maintain or repair the radome," Mr. Durst said [and colleagues] likened any such effort to something out of "Mission Impossible." They said that if one of the hundreds of fiberglass panels in the radome were damaged by lightning or ice, climbers would have to scale it, winches would have to be installed on the upper reaches of the tower, and cables would have to be lowered to the 9/11 Memorial plaza, where replacement pieces weighing thousands of pounds would await.

David M. Childs of Skidmore, Owings & Merrill, the chief architect of the building, has since stated the firm is willing to "work with the [Port Authority] on an alternate design," but at press time that was the latest development. 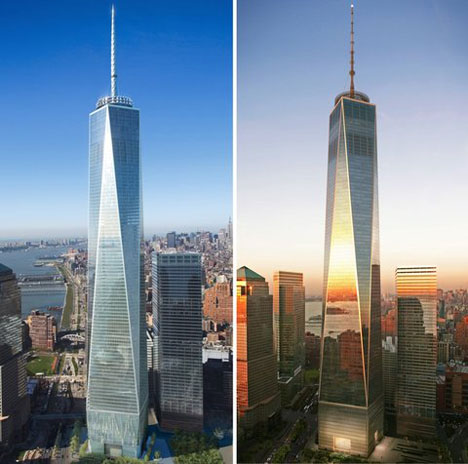