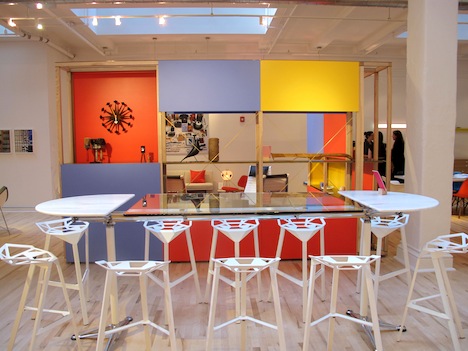 With a storied century-long history, Herman Miller has pushed the boundaries of American furniture manufacturing since its founding in 1905 in Michigan. As one of the first companies to manufacture modern furniture, the concept of human-centered design has always been at the heart of the company. As Design Director George Nelson envisioned in 1952, Herman Miller's permanent collection should be, "designed to meet fully the requirements of modern living." 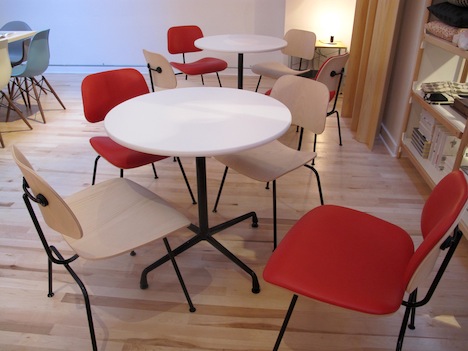 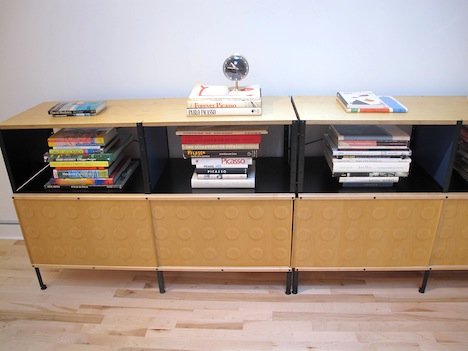 I can't help but look at what's on a bookshelf. What three artists do Eames collectors love? Hockney, Picasso and Miró.

To mark the occassion, the company has staged a 2-month retail Pop-Up in New York City's SoHo. The shop is the first pop-up shop in the company's history. I loved the newly upholstered Eames Molded Plywood chairs found in a vignette near a low-slung Ward Bennett ash-framed and leather Scissor Chair. Out of the archives, George Nelson's modular storage cabinets large and small are on display; Ward Bennett's H-Frame Credenzas have chrome finishes that timelessly belie their age. Quietly in the mix were three new additions to the Herman Miller family: Leon Ransmeier's AGL table, Industrial Facility's wire-framed basket Sofa and Konstantin Grcic's Medici chair for Mattiazzi (distributed by Herman Miller.) 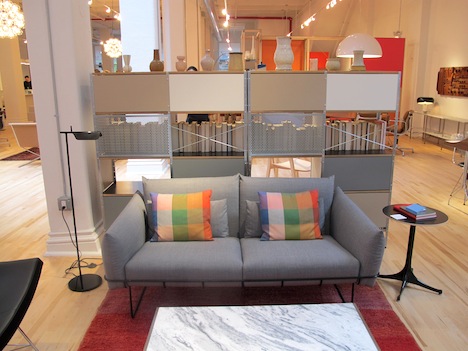 Industrial Facility's Sofa Group is a thoughtful and contemporary addition to the category. With our transient modern lifestyle, the Sofa is lightweight, and versatile—a wire-frame basket is stuffed with a series of free-floating, individual cushions—allowing for ease of transport and maintenance. Additionally, the base of the frame employs a suspension technology that was previously used in Herman Miller's Nala Harmonic Tilt medical chair. 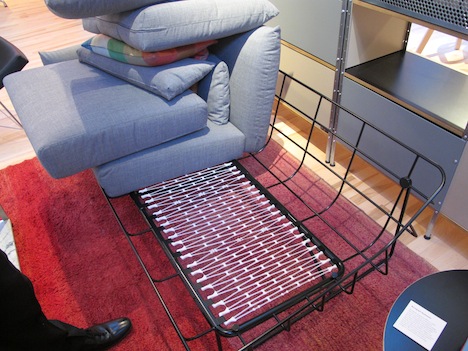 Ransmeier's AGL Table is inspired both in form and philosophy on the historic Rutan Model 76 Voyager's 1986 flight around the world. After 9 days, the aircraft was the first to circumnavigate the globe without stopping or refueling. As Ransmeier explains, "The emphasis on fuel efficiency bears a strong relationship with my own concerns for environmentally sustainable manufacturing. I was determined from the beginning to minimize the material used with an efficient structure." 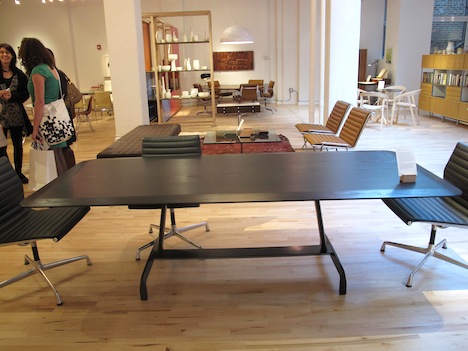 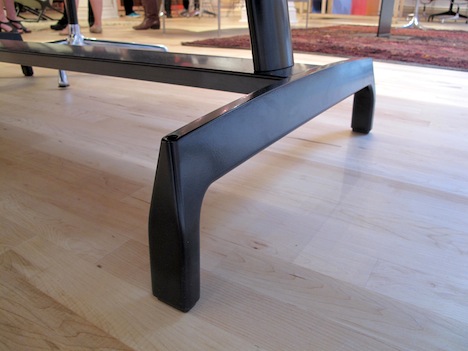 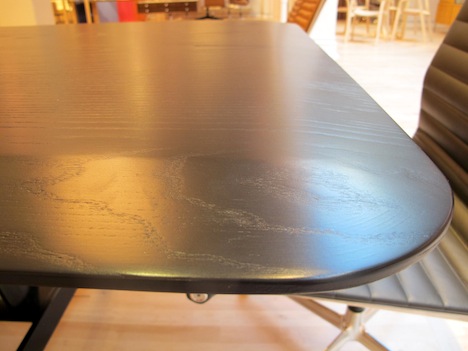 AGL Table's Beveled Top comes in a range of materials

Konstantin Grcic's Medici chair is touted as a modern Adriondack Chair. With a low-slung profile, the finishes can be upgraded from outdoor seating to indoor lounging. 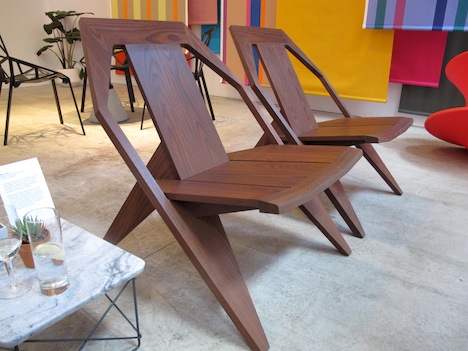 In addition to previews of the new Collection, you can pickup a range of odds and ends in the Gift Shop section of the Herman Miller Pop-Up Shop. David Weeks' toys and cubebots, Fort Standard stacking blocks, Best Made Co axes, Heath Ceramics, House Industries, Alexander Girard Textiles and more! I especially loved the Herman Miller-branded writing implements. 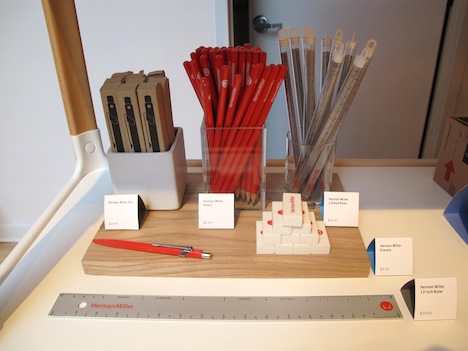 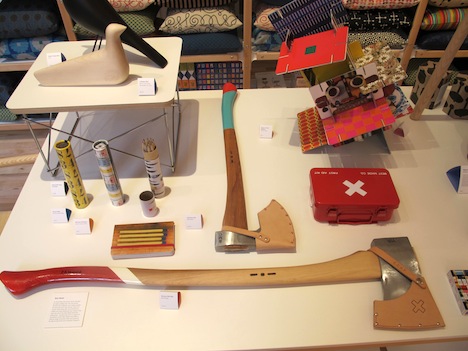 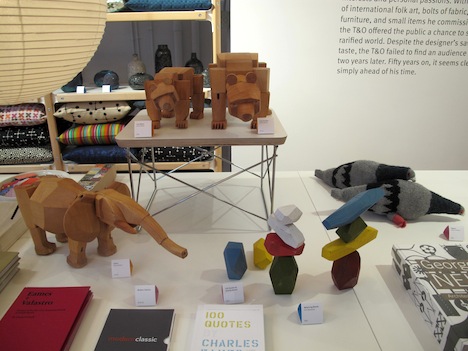 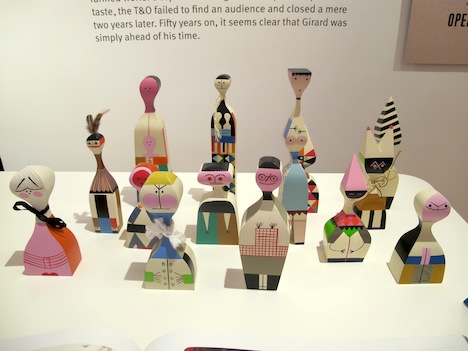 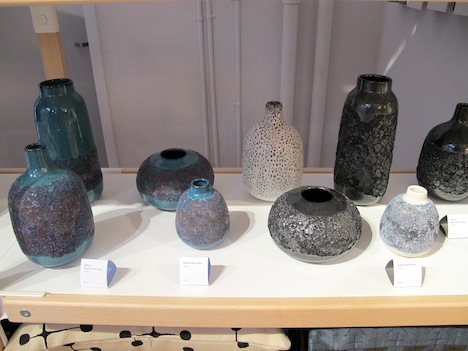 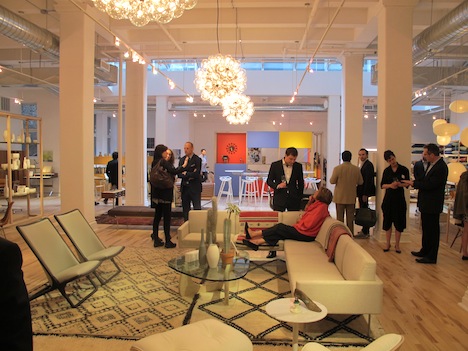 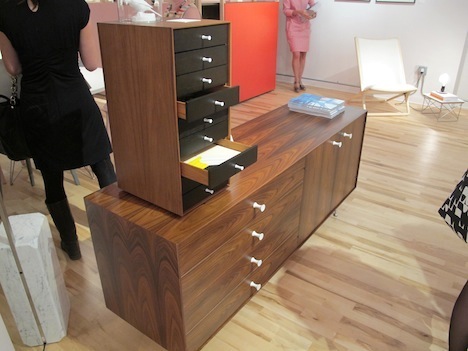