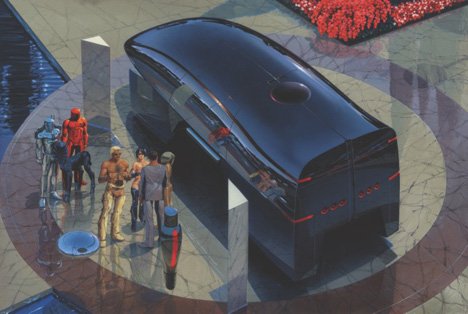 "Hypervan (rear down view)" (2008); all images courtesy of BravinLee programs

Film lovers—sci-fi fans in particular—are surely familiar with the work of "Futurist Designer" Syd Mead (we're not sure if he's got issues with the term 'concept designer,' but we'll grant him the exception), and even the masses ought to recognize his groundbreaking work for the likes of Blade Runner, Aliens and TRON, among other canonical examples of the genre. If Mead's reputation as a visionary visual artist is all but surpassed by those blockbusters, the current exhibition of gouaches—spanning the four decades of his career and counting—at BravinLee gallery in Chelsea offers a fascinating look at his work in a fine art context. 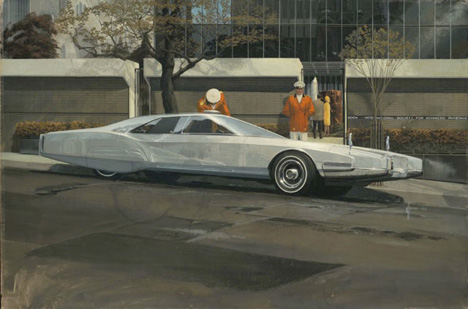 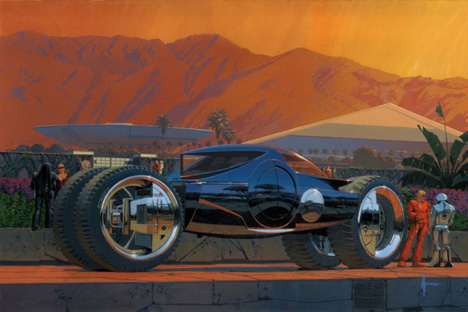 Per the press release for Future (Perfect):Mead's vision of the future is sleek, erotic, and glamorous. It is populated by impeccably dressed, trim and tanned 1%ers and smartly uniformed worker bees. Mead is fond of portraying the arrival of guests or travelers in the act of greeting their hosts, which allows him to focus on the vehicle in the context of a short narrative sequence. The fantastic conjectural machines seem more plausible when placed in a richly detailed context and in a familiar situation. With few exceptions, Mead's future is utopian, free from famine, litter, security lines, corpulent tourists in cargo shorts, white socks and traffic snarls. Almost invariably the result of a client's commission, Mead once described his work as the lubricant for capitalism... 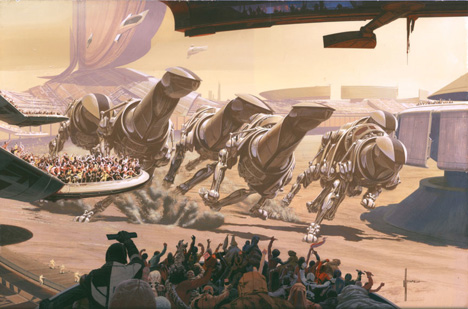 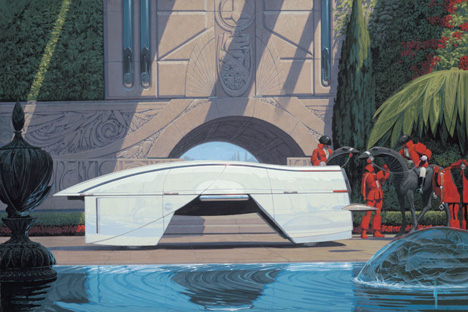 His trajectory, for the uninitiated: Mead started out as an automotive designer at Ford but soon took his increasingly forward-looking approach to architectural interiors for a variety of public and private clients, as well as his signature hypothetical vehicles and vignettes. According to his biography,With transportation design as his first love, Syd Mead seldom misses an opportunity to provide his unique blend of futurism and believability to those projects consisting of a vehicle that travels from "A" to 'B". Whether it be designing solar powered unicycles, show cars, luxury yachts, cruise ships, the interiors of private 747's, or interplanetary spacecraft, each receives the same attention to detail within a perfectly designed scenario. This combination has become a Syd Mead trademark and has been seen in everything from concept cars for Ford Motor Company to futuristic "Hypervans" which have been the subject of his latest full color illustrations. 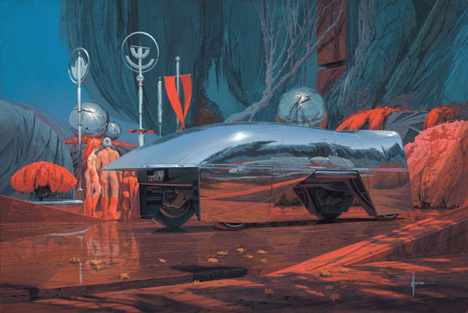 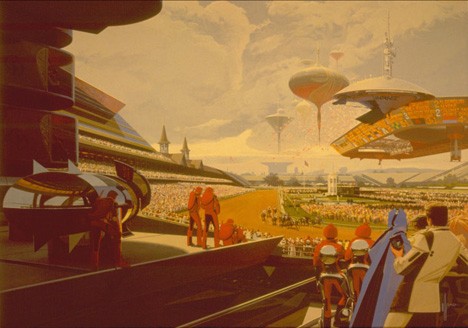