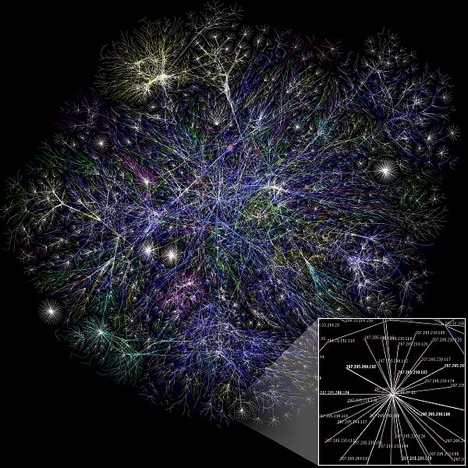 Law enforcement is an extremely complex line of work, as police officers have to keep up-to-date with events and people in the community, but usually from the sidelines or through second-hand information. Tools that can augment police officers' mental models of the communities they serve, especially in an ever increasing information-rich world, are critical to the future of policing.

And that's where graph theory comes in. Graph theory looks at objects (nodes) and the relationships (edges) between them. These objects could be people, computers, or buildings, while the corresponding relationships could be family ties, Internet connections, and roads. As Facebook and other social networking tools continue to bring our world closer together each day, social network applications of graph theory are becoming a hot topic. Ever hear of "six degrees of separation?" Thanks to Facebook, it's now closer to four or five. 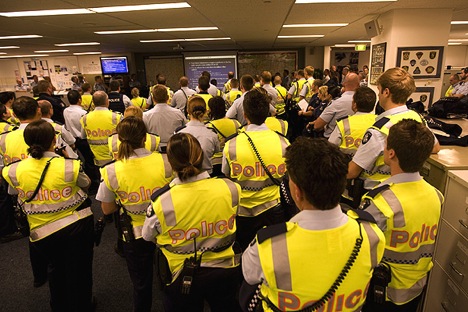 Criminal networks are really just a specific example of social networks. Currently, law enforcement agencies use link analysis, a basic application of graph theory, to attempt to understand these networks. Link analysis produces a visual output of relationships between nodes, but "people tend to believe that actors in the center or at the top of a graph are crucially and most important." Instead, Renee van der Hulst describes a framework for using social network analysis (SNA) for crime analysis. Beyond just outputing a visual graph, SNA provides a mathematical approach to quantify the "characteristics of network activity, social roles, positions and associated social mechanisms."

In 2011, researchers from Virginia Commonwealth University implemented a pilot program of SNA in the Richmond, VA Police Department to test its effectiveness. The Richmond City Police Department asked the researchers to identify the reason behind why "two groups of previously friendly males" were now engaging in a "rash of violence" against each other. The researchers mined a police informational database for details concerning twenty-four persons of interest, as well as any connections four people out. 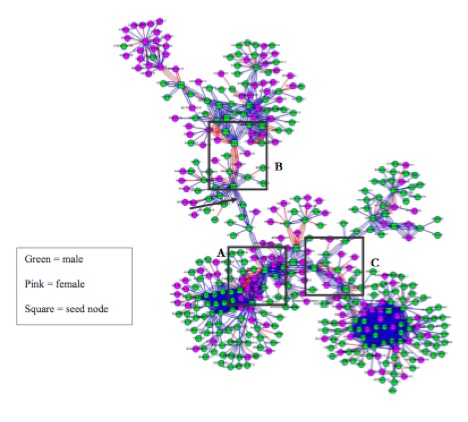 The social network of gang members.

The connections were denoted as either positive ties, for criminal partnerships or family and friends, or negative ties, for hostile relationships. The primary metrics used to analyze the network included node degree, betweenness and closeness. Degree measured the number of edges a node had, betweenness measured the centrality of a node among other nodes, and closeness measured how quickly a node could obtain information within the network. Betweenness proved to be one of the more helpful metrics, as it illuminated "interpersonal tensions among males revolving around their relationships with females." These tense relationships were identified via "a high number of overlapping positive and negative ties surrounding" unbalanced triads (a basic building block in social networks) involving females. 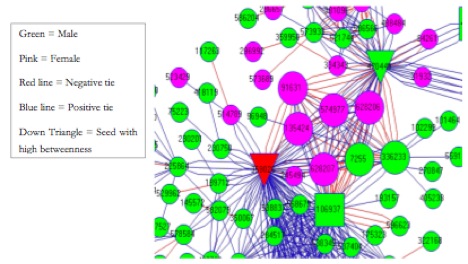 This revelation was corroborated by detectives who had determined the same cause of the violence. However, the social network analysis also identified "six other vital players of which the police were unaware." The researchers later applied a similar methodology in two other cases - this time in real-time - allowing police to locate a homicide witness and also "piece together sixteen convenience store robberies that were not previously thought to be connected."

On the whole, this pilot program was extremely successful. However, the researchers also identified certain limitations of the methodology, including that the social network generated for use in analysis was based solely on the police department's interpretation of the network, rather than an accurate mapping of the network. Another barrier to implementing a robust SNA program is populating the graph with data the police department already collects on its suspects and arrested lawbreakers. The researchers in Richmond had to translate qualitative descriptions of connections from the police department's database into quantitative data suitable for analysis with SNA.

Despite these potential challenges, SNA could be an essential element in the developing realm of crime analysis technologies. The goal should be to develop these technologies further with real-time operational implementations in mind, instead of merely administrative applications.