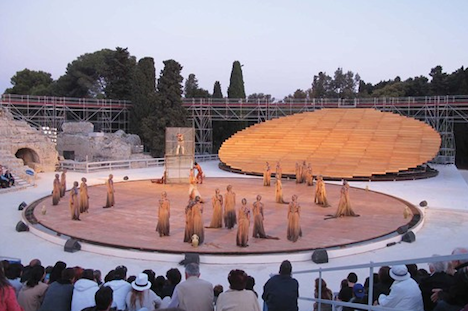 Rem Koolhaas led OMA's recently completed scenography project for Teatro Greco, or the Syracuse Greek Theatre, a historical landmark in Italy that dates back to the 5th century BCE. Every summer the theatre stages three classic plays, and for this season's cycle they commissioned OMA to design a temporary stage that will remain up for Aeschylus's Prometheus Unbound (directed by Claudio Longhi), Euripides' Bacchae (dir. Antonio Calenda) and Aristophane's The Birds (dir. Roberta Torre). 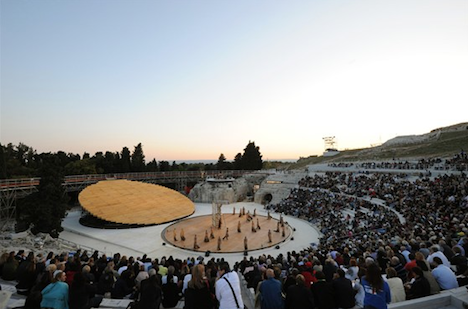 The stage—aluminum scaffolding clad with multilayer marine plywood—was designed in three parts, the Ring, the Machine and the Raft. The Raft, the name for the circular stage, "reimagines the orchestra space as a modern thymele, the altar that in ancient times was dedicated to Dionysian rites." The Ring is a suspended walkway that makes a half circle around the stage and backstage area, providing actors with different ways to enter a scene. The Machine is the backdrop, which can be altered to suit different productions. A sloping circular platform seven meters high, it's the mirror image of the stage. It can rotate, "symbolizing the passage of thirteen centuries during Prometheus's torture; Split down the middle, it can also be opened, allowing the entrance of the actors, and symbolizing dramatic events like the Prometheus being swallowed in the bowels of the earth." 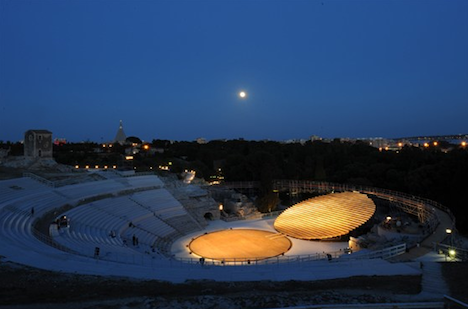 If you've ever been to outdoor theater like Shakespeare in the Park, you know the difference a stage can make, and I love how this stage mimics the overall circular shape of the amphitheater itself. If you caught Romeo & Juliet at the Delacorte Theatre during Shakespeare in the Park a few years back, you will most definitely remember the incredible stage they built. Two half-bridges (picture a bridge split down the middle) that looked as if they were made from old, blackened iron could be wheeled together to form a full bridge or pulled apart to create other structures. All this took place over a circular platform filled with water that they actors made splendid use of during the production.

OMA's design is a perfect fit for the location. It's respectful of the space while adding a light modern touch to the centuries-old amphitheater. The images here are from the inaugural performance of Prometheus Unbound. 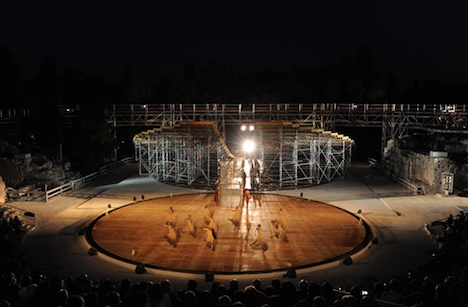 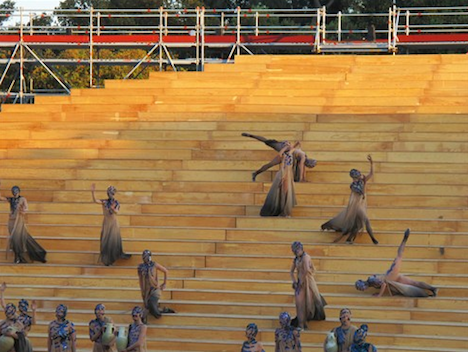